PTI
Published Aug 25, 2016, 7:26 pm IST
Updated Aug 25, 2016, 7:56 pm IST
The students and teachers demanded that the university should be declared out of bounds for the scholar to ensure safety of complainant.

Members of AISA and JNUSU shout slogans during their protest in connection of JNU rape case at Police Headquarters in New Delhi. (Photo: PTI)

New Delhi: A day after JNU student Anmol Ratan surrendered before police after a fellow PhD scholar accused him of raping her, the varsity students and teachers on Thursday demanded that he be suspended from the university.

The students and teachers demanded that the university should be declared out of bounds for the scholar to ensure safety of the complainant.

"We are extremely dismayed to know that three days after the complaint has been lodged, the accused is yet to be suspended or declared out of bounds from the university, so that safe conditions of complaint and testimony for the complainant may be maintained.

"We demand that this be done forthwith. This failure to act has tarnished the image of the JNU administration quite severely," the varsity teachers said in a joint statement. 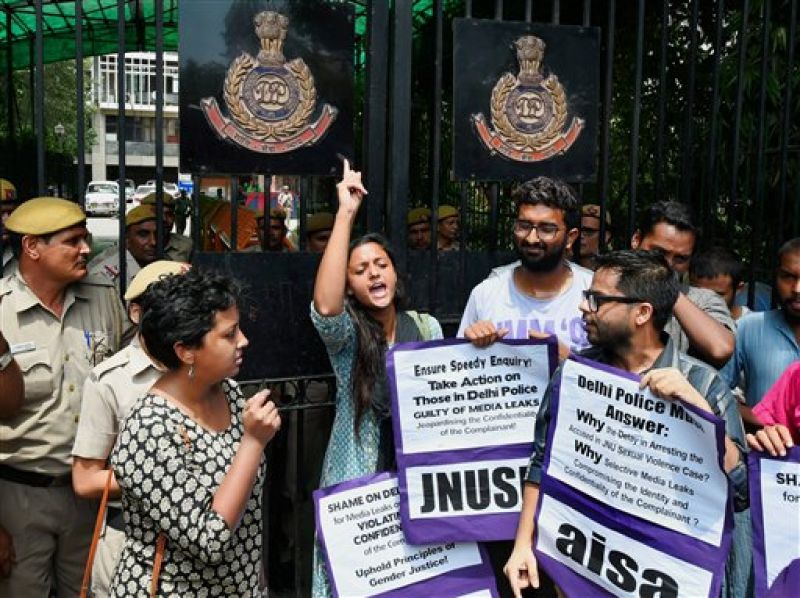 A 28-year-old girl had approached Delhi Police earlier this week alleging that Ratan, an activist of the left-affiliated All India Students Association (AISA) had raped her in a hostel room on the university campus.

The woman, a PhD student, alleged that Ratan, offered her a copy of a movie that she was looking for, took her to his hostel room and offered her a spiked drink.

She told police that he raped her when she was unconscious. He also threatened her and asked her not to report the matter.

Taking strong note of the incident, AISA had expelled Anmol from the party which ended his primary membership.

The accused, who was absconding since August 20, surrendered before the police yesterday.

Scores of students of the varsity staged a protest outside Delhi Police Headquarters demanding that the force refrains from revealing information which could reveal identity of the victim.