Transfer duty is meant to fund local bodies so that basic amenities can be provided to citizens.

Hyderabad: Crores of rupees collected from property buyers in the form of fees and taxes at the time of registration of property is not being utilised for the intended purpose.

The transfer duty is meant to fund local bodies so that basic amenities can be provided to citizens. But the government has not transferred Rs 300 crore collected as transfer duty in the past 15 months to the local bodies. The funds are instead being diverted to other purposes even as local bodies are struggling for funds to develop cities and towns.

Successive governments in undivided AP too had not transferred these funds to the local bodies.

After Telangana State was formed in June 2014, the state government transferred these funds to local bodies promptly, but only for a year. No funds have been transferred for the past two years.

Areas within GHMC limits and HMDA limits would be the major beneficiaries if funds are transferred, as Hyderabad and Ranga Reddy districts contribute a major share to the revenue of the stamps and registration department as property prices here are high.

Of the Rs 300 crore, the government owes, the local bodies in Hyderabad and Ranga Reddy will alone get nearly Rs 200 crore.

The local bodies, which include gram panchayats on the city’s outskirts which come under Ranga Reddy district, are not in a position to build basic civic infrastructure such as roads, drainage systems, sanitation etc due to scarcity of funds.

For the past two years, office-bearers of local bodies have been running around the finance department in the Secretariat trying to get the property transfer funds released, but in vain.

Local bodies themselves are often at fault for not using the funds they collect. The library cess that is collected by the Greater Hyderabad Municipal Corporation (GHMC) from citizens is not being used for the development and proper maintenance of public libraries in the city. The GHMC owes over Rs 300 crore to libraries. 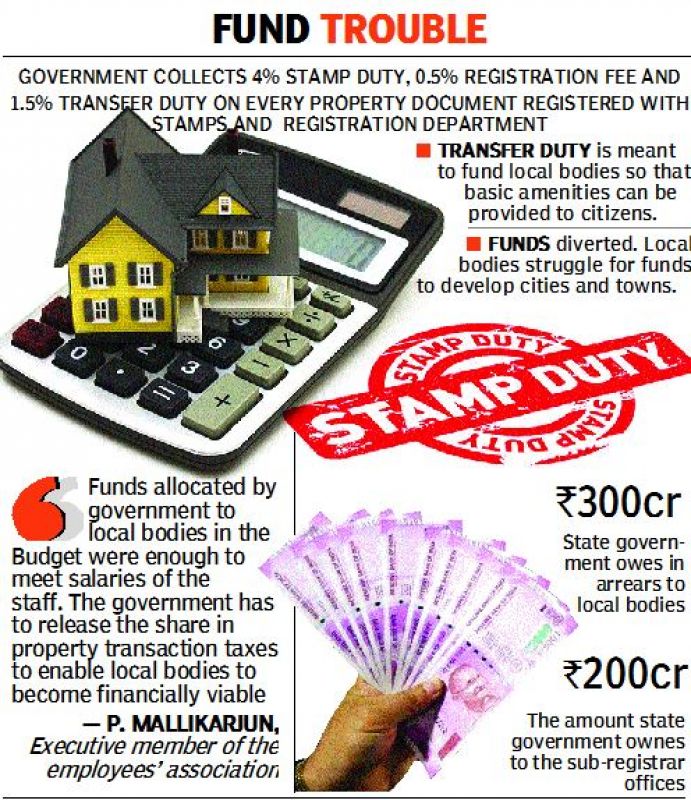 Same is the case with other local bodies that argue that they will clear the arrears once the government gives them the property transfer funds.

Employees’ associations of local bodies are demanding that the government release property transfer funds promptly so that they can take up civic work on their own without relying on government for funds for basic amenities.

“Property transfer fund issue should be the main item on the agenda of the extended meeting of local bodies to be conducted by municipal minister KTR Rao in the first week of August. The funds allocated by government to local bodies in the Budget were enough to meet salaries of the staff. The government has to release the share in property transaction taxes to enable local bodies to become financially viable,” said P. Mallikarjun, executive member of the employees’ association.

The association wants the state government to devise an online fund transfer mechanism wherein the share of local bodies gets credited directly and automatically in their accounts once a property registration is completed at the sub-registrar’s office. If this is done, the problem of arrears will never arise.

No respite from corona menace as cases near 2 lakh mark

13 infiltrators killed in 4 days across LOC