Mumbai: Mumbai came to a standstill on Monday -- just a few days after the onset of monsoon -- as overnight rains led to the usual chaos of delayed trains, water-logged roads, horrific traffic snarls, and a rather scary wall collapse in a central neighbourhood of the city.

Four people have died in the last 24 hours in the city and its suburbs. A 15-year-old died after falling into an open pit in Malad. Another 13-year-old was killed in a wall collapse in thane. Two died yesterday when a tree collapsed on them near Azad Maidan in South Mumbai.

A large part of the boundary wall of a plush apartment complex in Wadala collapsed and subsided in the morning, burying nearly a dozen cars. The damaged cars, mostly belonging to residents of the complex -- Lloyds  Estate -- were stuck in debris. 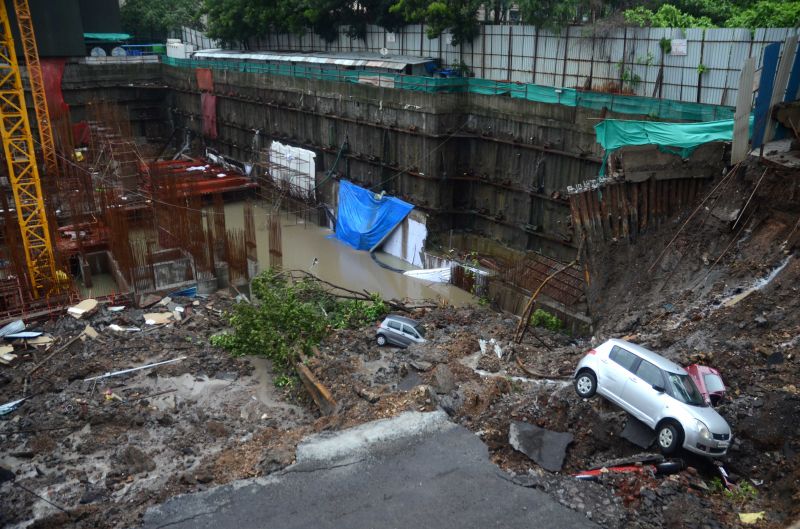 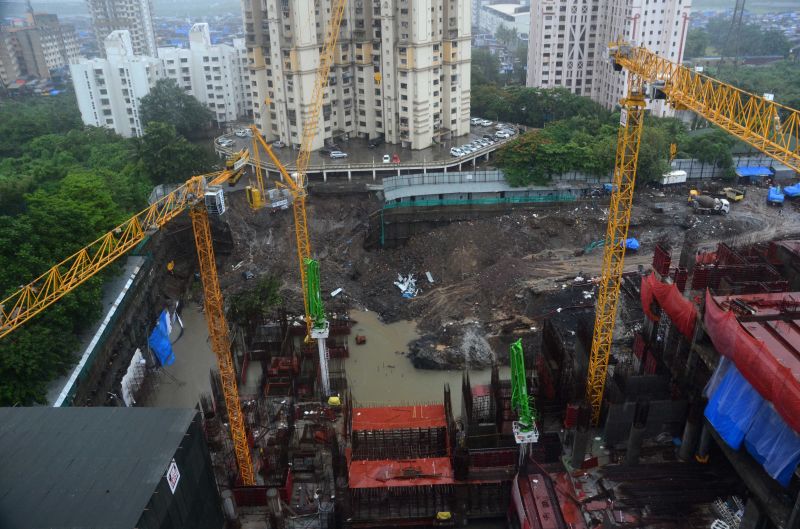 The building, home to senior lawyers, judges and businessmen, was vacated by civic authorities. No one was injured in the incident. 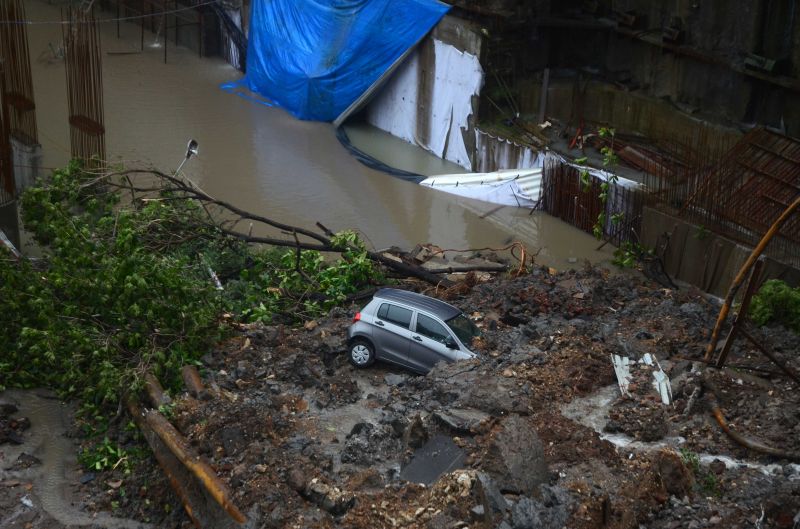 Residents of the building complained that construction work in the vicinity had weakened the foundation of their boundary wall that gave way on Monday.

Local trains, the city's life line, were running behind schedule as usual, at the hint of the first heavy rains this season. Water-logging was reported from low-lying areas and office-goers and vehicles found it difficult to navigate roads in large parts of the city.

Meanwhile, Mumbai's civic body officials placed pumps on stand-by in neighbourhoods that are prone to water-logging.

The Indian Meteorological Department has said that heavy to very heavy rains are expected to continue.

Two people died and five were injured on Sunday after a tree fell on them near Metro Cinema at MG Road in South Mumbai's Marine Lines area, according to news agency ANI.

A 13-year-old boy was killed and his parents were injured when an adjacent wall collapsed on their house at Wadol village in Ambernath taluka of Thane around 2:15 am today, the district civic body's regional disaster management cell chief Santosh Kadam told news agency PTI.

In another incident, a 65-feet compound wall of a housing complex in Thane city collapsed this morning, crushing two cars and another vehicle, he said.

On Sunday, Mumbai recorded the highest amount of rainfall at 110.80 mm between 8:30 am and 4:30 pm, a Met department official said.

Here are the updates on Mumbai rains and weather: 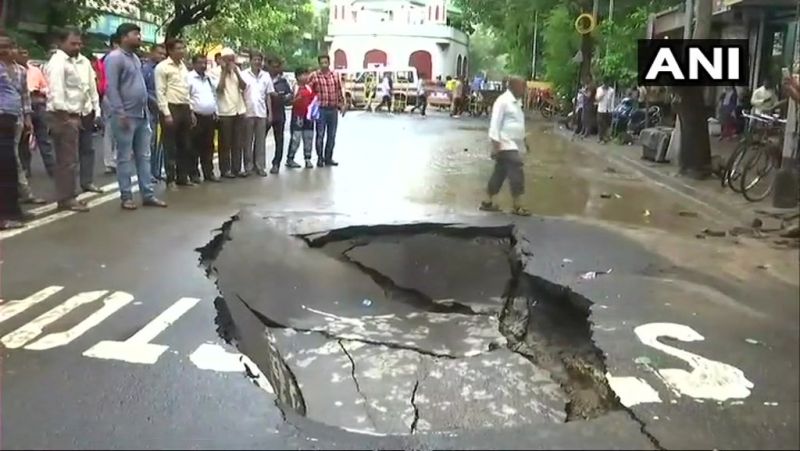 06:27 pm: A woman admitted to hospital in a critical condition after part of balcony of a flat collapsed at Jadhav Chawl near Durga Mandir in Andheri, news agency ANI reports.

03:45 pm: A 37-year-old woman was admitted to hospital in a critical condition after wall of an under construction building collapsed at around 4:45 am on Monday, at Vidyalankar road in Wadala's Antop Hill, following heavy rain.

FIR have been registered against the builder in the case. 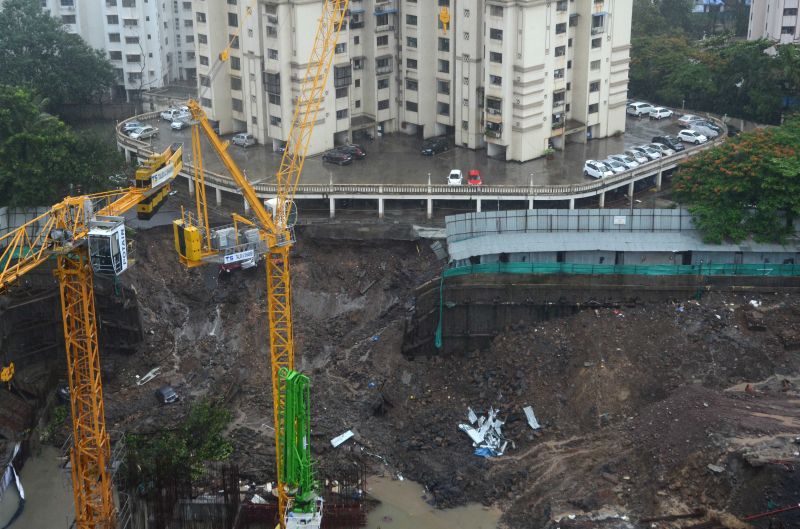 02:40 pm: A K Gupta, GM, WR, takes stock of the situation and restoration work of the Uttar Pradesh line between Bhilad and Sanjan in Mumbai division.

Shri A K Gupta, GM,WR reached the site between Bhilad & Sanjan where UP line was affected due to water flooding, to take stock of the situation and the restoration work. The emphasis is on restoration ASAP while traffic is being run on single line working. Leading from the front! pic.twitter.com/Sm5nCjwZX6 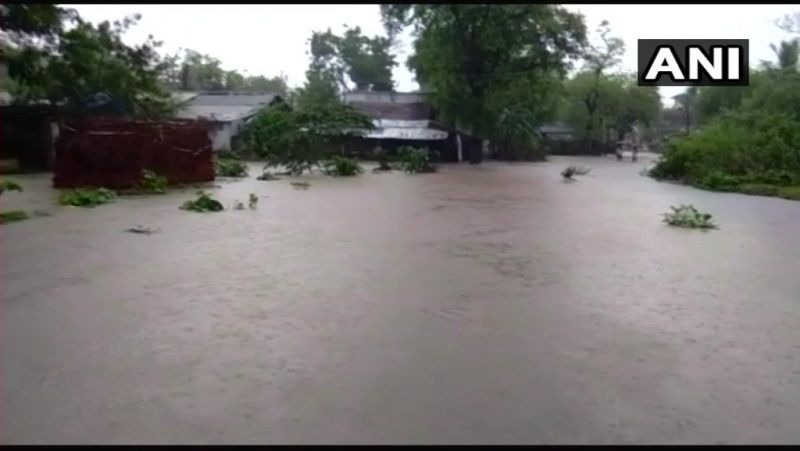 No disruption in running of trains on WR suburban section inspite of heavy rains. #WRUpdates @drmbct

01:05 pm: According to Western railways, there has been no disruption in the running of trains on Western Railways suburban section. However, several trains have been rescheduled. Here are the details.

12:08 pm: A traffic update tweeted by Mumbai police said that the Milan Subway near Santacruz and Khar subway are now open. Both subways were closed earlier this morning because of water-logging, which Mumbai police said is still responsible for the slow movement of traffic.

The heaviest rainfall was recorded in 1991, when Mumbai received 399 mm of rain in a single day.

11:00 am: In tweet, Mumbai police says its 'bandobast' (preparation) is as heavy as Mumbai rains.

"The showers are heavy but so is our 'bandobast' on the streets to 'be there' for Mumbaikars," Mumbai Police tweeted, saying they were 'always there' to help people reach their destinations.

The showers are heavy but so is our ‘bandobast’ on the streets to ‘be there’ for Mumbaikars. We are #AlwaysUpForDuty to help you reach your destination with a little care & caution from you during your journey #RoadSafety #MumbaiRains pic.twitter.com/KFOgI4BTLv

Traffic on Western Express Highway slowed down after a tree fell at Mahananda Dairy near NESCO, Mumbai police tweeted.

Traffic slowed down towards Girgaon Chowpatty as well after a tree fell at Krishna Sanghi Junction.

Mumbai Police also tweeted saying that a container broke down at JVLR bridge in Vikhroli, northbound near Eastern express highway, slowing traffic over there as well.

Traffic is also moving slowly on SCLR Kurla in both directions because of water logging, according to Mumbai police.

10:25 am: Seven cars were damaged after wall of an under-construction building collapsed at Vidyalankar road in Wadala's Antop Hill following heavy rains.

A container broke down on the JVLR bridge, Vikhroli, northbound near Eastern express highway. Traffic is moving slow #TrafficUpdate #MumbaiRains

A tree fell at Mahananda Dairy, Near NESCO, slowing down traffic on Western Express Highway in both directions #TrafficUpdate

10:20 am: Visuals of water-logging from Mumbai's Matunga East area.

Visuals of water-logging from #Mumbai's Matunga East area. According to India Meteorological Department, heavy to very heavy rain is likely to continue in the region. #Maharashtra pic.twitter.com/VPQqpaArYz

09:45 am: Heavy rains lead to water-logging in Mumbai's Sion area.

Visuals of heavy water-logging from #Mumbai's Sion area. According to India Meteorological Department, heavy to very heavy rain is likely to continue in the region. #Maharashtra pic.twitter.com/jE8HzilQDm

09:26 am: Due to heavy rainfall trains on Up and Down lines between Thane and Byculla stations are running late by 15-20 minutes.

09:21 am: There is some water accumulation at Sion due to continuous rains but trains are running on all three lines of Central Railway (Main line, Harbour and Trans-harbour) with a delay of 5-7 minutes: Central Railway.