Ahead of addressing the gathering, Narendra Modi bowed before the constitution before at the NDA parliamentary meeting. (Photo: ANI | Twitter)

New Delhi: The newly elected lawmakers of the ruling National Democratic Alliance met in New Delhi on Saturday and elected Narendra Modi as their leader.

After the meet, PM Modi met President Ram Nath Kovind at Rashtrapati Bhawan and made a formal claim to form the government.

Ahead of addressing the gathering, Narendra Modi bowed before the Constitution at the NDA parliamentary meeting. PM Modi spoke for about 75 minutes and touched upon a number of topics.

Delhi: Narendra Modi bows before the constitution before starting his address at the NDA parliamentary meeting. pic.twitter.com/es3Moi0A7L

“You all deserve greetings and those elected for the first time deserve an even bigger one. I offer all of you my greetings,” Modi said at the parliamentary meeting.

Modi said that the BJP chose me unanimously as the leader of the parliamentary party and all the NDA parties supported it and he is thankful for it.

He said people have accepted because of their 'seva bhav'. He encouraged that one has to prepare oneself to be always ready to help people even when they move through the lanes of politics and power. 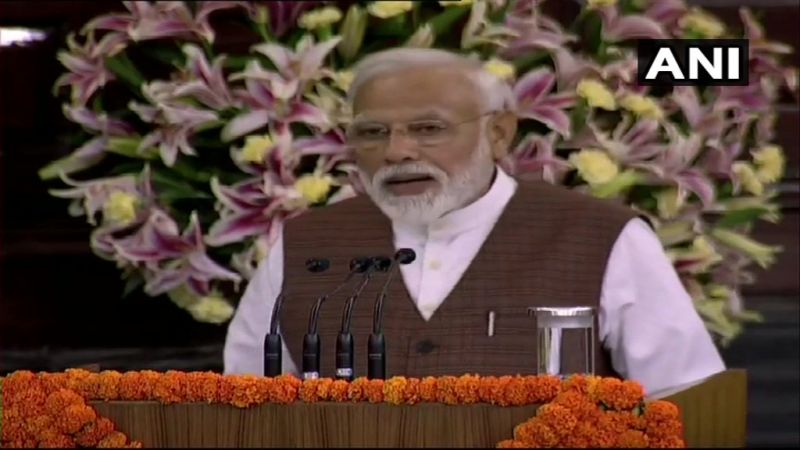 “2019 elections have worked towards breaking down walls and connecting hearts. In a way, they had become a way to unite the society...This gave a new height to these elections. The people have started a new era and all of us are a witness to it. You all have elected me as the leader, I think of it as a part of the system, I'm one of you, equal to you,” he added.

He said that these elections were pro-incumbency. Modi said, “This pro-incumbency wave was tied with the thread of trust. The trust was not only between people and government but also among people themselves. This gave birth to that trust."

Addressing the importance of women representation in governance PM Modi said, "This is for the first time in independent India that such large number of women MPs are sitting in the Parliament. This has been made possible due to women power."

"I am talking to you after bowing before the constitution, there can not be a 'bhed-rekha' (division) for a people's representative. We are for those who were with us, we are also for those who will be with us," PM Modi said.

Thanking the poor of India for showering love and trust in his government PM said, "We have worked for the poor in last five years. Poor have helped us form this government."

Talking about minorities, he said, "Minorities have been cheated for last five years. They have been used for vote-bank politics. It is our responsibility to take them into confidence and involve them in the nation-building process."

Adding to his slogan "Sabka saath, sabka vikas", which he used extensively in 2014, PM Modi said that "sabka vishwas" should also drive the MPs for the next five years. 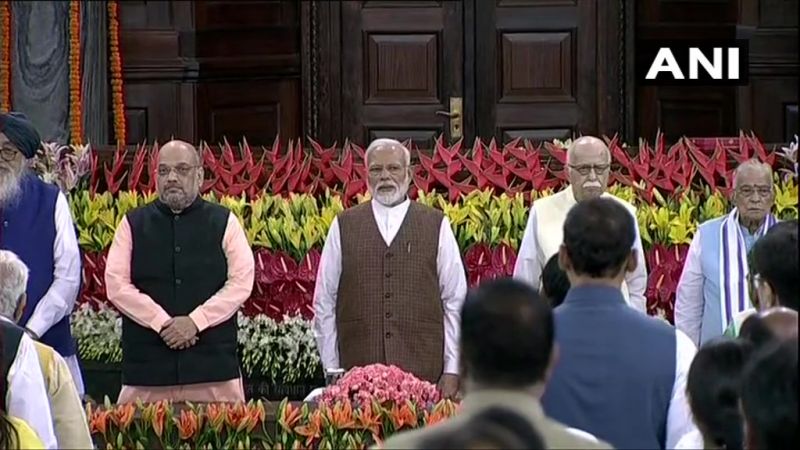 Delhi: Narendra Modi seeks blessings from senior BJP leader LK Advani, at the NDA meeting. He has been elected as the leader of BJP & NDA. pic.twitter.com/WfKKWEDc3j

Delhi: Senior BJP leader Murli Manohar Joshi greets Narendra Modi, after he was elected as the leader of BJP & NDA at the NDA meeting. pic.twitter.com/B9e1Z4vO5C

One by one, leaders of the National Democratic Alliance or NDA spoke in the central hall and supported the move to elect PM Modi.

BJP president Amit Shah said, “I thank all the allies and the MPs who have unanimously chosen NDA's leader Narendra Modi as the new Prime Minister of the country.”

"Modi is elected the leader of the parliamentary party of 353 MPs unanimously," Shah announced after the election as Modi acknowledged the support and cheers from MPs.

Addressing the members of NDA, Shah said, “22 crore people whose living standards have improved have blessed PM Modi. Everyone believed that Modi government would return with a clear majority. The nation has blessed us from all corners of the country. Surgical strikes showed us that there is a leader who can hit the terrorists back.”

Praising PM Modi, Shah added that he worked for 18 hours a day and did not take a single off.

Modi's election was a mere formality as the NDA had already declared him the alliance's prime ministerial candidate.

On Friday, the council of ministers led by PM Modi submitted their resignation which was accepted by President Kovind.

On Saturday morning, President dissolved the 16th Lok Sabha with immediate effect. The Election Commission also submitted a list of new-elected parliamentarians to the President.

Here's how to make your car corona free