Mumbai: The Mumbai Metro Rail Corporation (MMRC) has issued a new dress code diktat to its employees. The new circular reads: “No visible tattoos, no body piercing except for earrings, no wearing T-shirts without collar, no tank tops, no jeans, no ripped clothes and no sweatshirts at work.”

The MMRC feels that their work force is not paying attention to their dress code. While, the MMRC is known for implementing new age technology via use of social media and new age communication tools, in the circular it stated: “It has been observed that there is a lack of attention among employees in following the dress code defined in the MMRC HR policy. As an employee of the corporation, it is expected that the employee’s dress code convey a professional image at all times. Therefore, do’s and don’ts of dress code as per HR policy on uniforms are reiterated.” 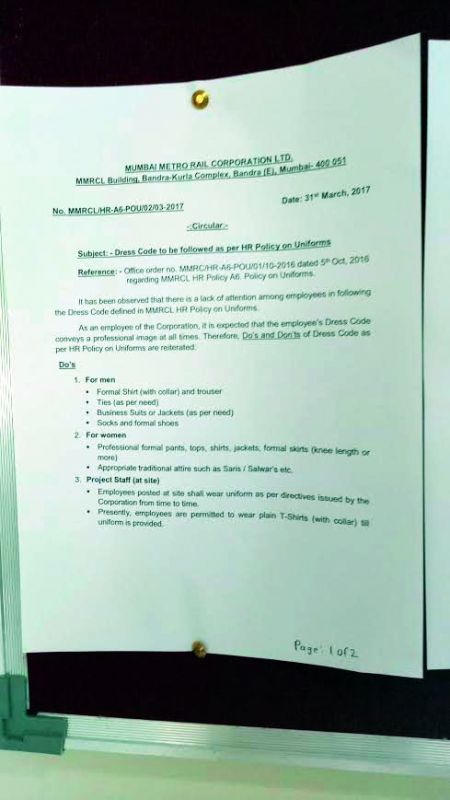 The circular states that both male and female employees should wear “formal” clothes to work.

An MMRC spokeswoman, confirmed the dress code circular. She said: “The circular on dress code was as per the HR policy of MMRC. It is an internal circular.”

However, an MMRC official on condition of anonymity said, “MMRC has appointed many youngsters in its engineering and accounts section. It was observed that at times they did not follow the prescribed dress code. Hence, this was just a reminder for these professionals who are working on both permanent or contract basis.”

In the don’ts list of the circular, the MMRC has directed, not to wear T-shirts (without collar), sweat shirts, tank tops, shoestring straps, jeans and denim.