Bela Bhatia row: ‘Dogs like you should be stoned,' Bastar IG told activists

Bastar: A day after activist Bela Bhatia was asked to vacate her house in Pandripani village in Bastar district by villagers, it has now emerged that a top cop has also been involved in threatening activists like her in the district.

According to a NDTV report, activists and lawyers claim that they have received abusive messages from Bastar’s Inspector General named SRP Kalluri, who called them ‘dogs’ and said they should be ‘stoned out of bastar’.

Activists claimed that they were sent the abusive messages because they asked Kalluri to intervene in Bela Bhatia’s case, who has been working to expose alleged abuse in the district by security forces.

Bhatia was allegedly threatened by a mob of men who asked her to vacate immediately, failing which they will set the house ablaze. Activists claimed that the men who intimidated Bhatia had the backing of the police and of Kalluri who has a controversial record.

In a message to Kalluri this Tuesday, Sandeep Singh, an activist wrote "This can't go (on for) long. You are not above the constitution. Don't sell your conscience for money."

He claims he received a response from Kalluri which said, "Maoists and their dogs like you will be stoned out of Bastar. Beware."

NDTV also accessed the exchange of messages between Pyoli Swatija, a Supreme Court lawyer with the top cop.

“Please ensure Bela Bhatia is not hounded out of her residence," Swatija wrote.

"Naxals will be kicked out of Bastar," Kalluri allegedly responded.

"What does your answer have to do with my query?” she texted back.

The only response she received was a curt “F U” (short for fu** you). 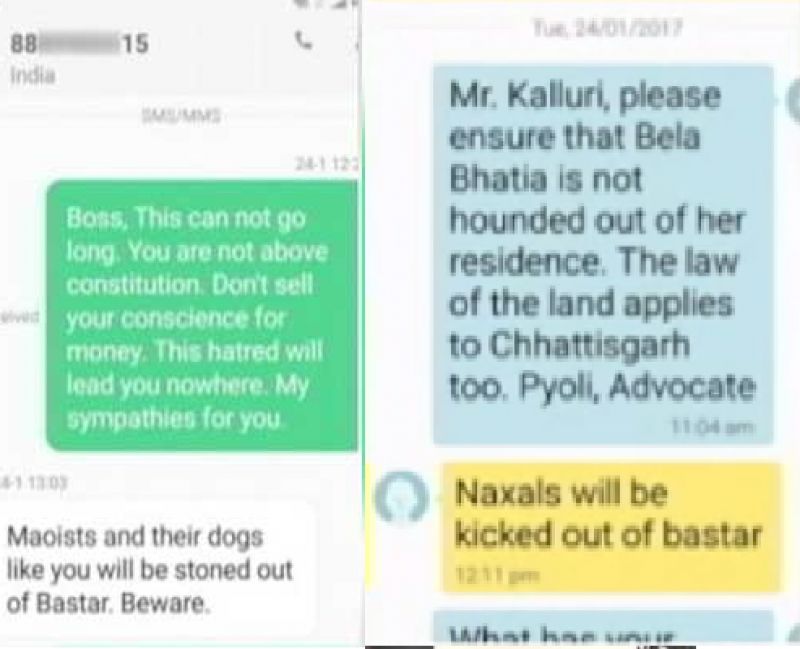 Screenshots of the messages exchanged between the activist and lawyer with Bastar IG. (Photo: NDTV videograb)

Hounded by locals to abandon her residence, Bela Bhatia has agreed to leave the house, but is adamant that she will not leave Bastar without finishing her work.

Bhatia, who has been working in the region for several years, claimed that her house was gheraoed by a group of unidentified people who asked her to vacate her rented accommodation.

"A group of 30 or so men came on motorbikes and a SUV and threatened their way inside the house. They said I would have to vacate this place immediately or they will set the house ablaze. I went inside the house and called the collector who then sent the police," Bhatia had told the media.

She said the mob was agitated even after the police reached the spot. "I will leave this house only since my landlord had been pressurised, but I will not leave Bastar. I have requested the collector to provide a safe place for me," Bhatia added.

Meanwhile, the Chhattisgarh police said in a statement had said that 15 police personnel, including four women, led by sub-inspector Kripal Singh Gautam have been deputed for Bhatia's security.

Notably, Bhatia was among a group of people who had accompanied a National Human Rights Commission team to villages of Bijapur two days ago to record the statements of alleged rape victims.

Early this month, the NHRC had sent a notice to the state government over alleged rape, sexual and physical assault of 16 women by the state police personnel in Bastar division (in October 2015 and January 2016), observing that the government is "vicariously liable" for it.

Flight delayed over mobile chat between couple in Mangaluru