School Children in Chennai accord warm welcome to US Coast Guard Cutter Ship ‘Stratton’ on its arrival at Chennai Port on Friday. (Photo: DC)

Chennai: School children of Chennai accorded a warm welcome to US Coast Guard Cutter Ship 'Stratton' on its arrival at Chennai Port on Friday. The ship reached Chennai for a five-day joint exercise with the Indian Coast Guard.

As the ship entered the harbour, after a brief joint helicopter exercise, the Coast Guard Band played music welcoming the US Coast Guard Personnel. Students from Sindhi Model Higher Secondary School, Purasaivakam and Anaikkum Karangal school welcomed them waving Indian and US flags. They were given a  traditional welcome with sandal garlands and kumkumam applied to their forehead. After the function, the children took group photos with the Stratton' ship Captain Bob Little and others.

Speaking to media persons at Chennai Port, Captain Bob Little said it was really nice to see school children and the Army Band welcoming the US Coast Guard ship. "We are very excited to be in Chennai. 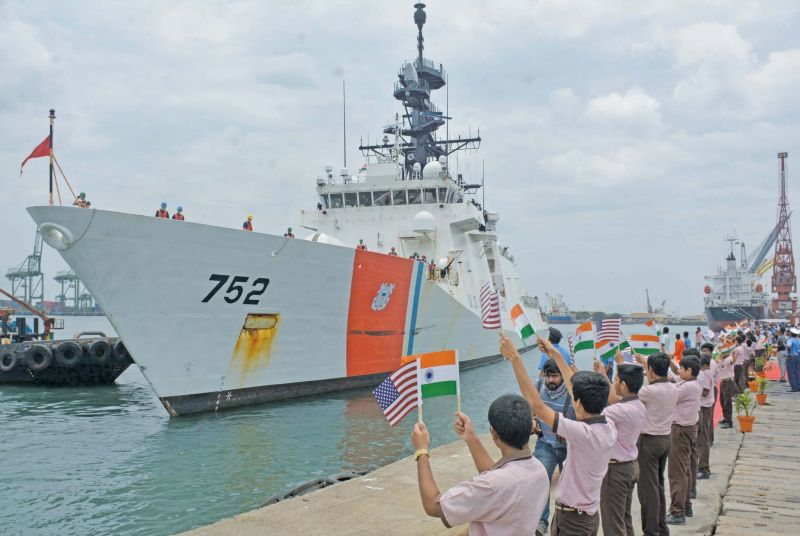 The US Coast Guard and US Navy are happy to partner with Indian Coast Guard in conducting operations together. The next few days we will be working with the Coast Guard personnel in law enforcement, subject matter, search, rescue and relief operation in the sea. Today we have conducted joint helicopter operations in the sea," he said.

US Coast Guard Cutter Ship 'Stratton' (752), is the Third Legend class Cutter ship of US Coast Guard. It has been named after Dorothy Constance Stratton, who led U.S. Coast Guard Women's Reserves during World War II. She died at the age of 107 years in 2006. The construction of the ship began in the shipbuilding yard in Mississippi, United States in 2008. The then first Lady of US Michelle Obama, sponsored and christened the third U.S. Coast Guard National Security cutter Stratton (WMSL 752) on July 23, 2010 in Mississippi.

After completing sea trials, US Coast Guard had acquired Stratton on September 2, 2011. It was commissioned in US Coast Guard on March 31, 2012. In July 2015, Stratton intercepted a semi-submerisible loaded with approximately 16,000 pounds of cocaine.

Stratton was able to offload more than 12,000 pounds worth an estimated $181 million before the craft sank. Stratton is a national security cutter and among the largest and technologically advanced in the coast guard surface field.

Captain Bob Little graduated from the U.S. Coast Guard Academy in 1995 with a Bachelor of Science in Management. He was awarded a Master of Business Administration by both the College of William and Mary and Massachusetts Institute of Technology. He is also a graduate of the Air Command and Staff College.

He served in six cutters for more than 11 years in the sea around the globe. He served secure maritime border and protect international commerce. He served in Atlantic and Pacific region and conducted missions including search and rescue, coastal security, marine environmental protection and defence readiness.

Captain Bob Little had served as the chief of operational forces and was responsible for providing multi-mission ready cutters and aircraft to Coast Guard and Navy operational commanders and other government agencies to support national strategic priorities.

An official said "This maiden visit and joint exercise is in continuation of the efforts by the Governments of both the countries to enhance cooperation between the two Coast Guards in the areas of maritime safety and security. The (USCG) visit provided an opportunity to strengthen cooperation and interact on threats to marine environment by oil spills and maritime security including trafficking of people, drugs and firearms, piracy and illegal fishing. In addition, a friendly volleyball match between the two Coast Guards and CSR activity by USCG are also scheduled during the five-day stay of USCG ship at Chennai ending Tuesday next.

Among others Deputy Inspector General Sanjeev Dewan, TM, Commander, Coast Guard District No. 5 (TN) along with officials from the Indian Coast Guard and the US consulate graced the occasion.