Hyderabad: Thousands of people occupied important positions in the state services of Hyderabad during the Nizam’s rule but no one was able to achieve the kind of acclaim that Raja Bahadur Venkata Rama Reddy did.

Unlike other civil servants who accumulated wealth and titles, Venkata Rama Reddy focused on contributing to society, particularly in the area of education. Thousands of students have benefited from his service.

Venkata Rama Reddy was born in Rayanipet of Wanaparthy Sansthan in Hyderabad State in 1869. He lost his mother three days after his birth, and his father at the age of five. He began his career as a sub-inspector and rose to the rank of kotwal (police commissioner), a post that was almost exclusively held by Muslims during the Nizam’s rule. He held the post for 14 years, until 1934.

It would have been impossible for Rama Reddy to have attained such distinction without having demonstrated extraordinary qualities. He was known for his perseverance and fair-mindedness. Such was his commitment and dedication, that he was honoured by both the Nizam as well as the British. The Nizam gave him the title of Raja Bahadur, and the British inducted him into the Order of the British Empire. 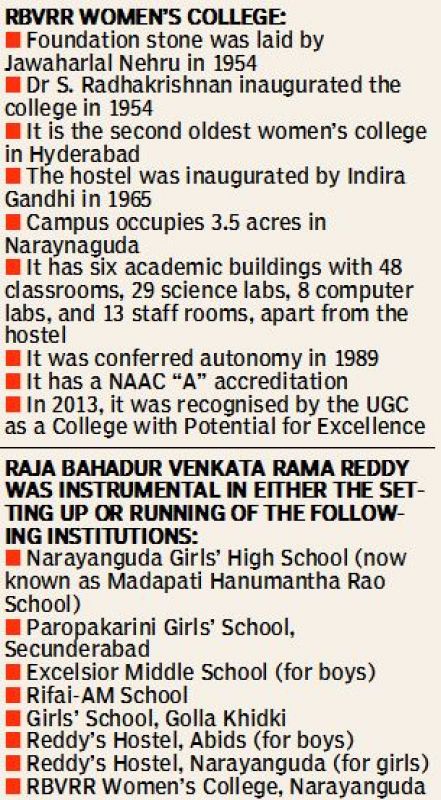 Apart from excelling at his job, Rama Reddy would carve out time to dedicate to social service. He was instrumental in the establishment of Narayanguda Girls’ High School (now known as Madapati Hanumantha Rao School), and RBVRR Women’s College, Narayanguda. He persuaded the youth, especially those from the Reddy community, to become educated and take up government jobs. He established the Reddy Hostel in Hyderabad in 1917.

In 1931, when Naray-anguda Girls’ High School was on the verge of closure, Reddy took it upon himself to revive the school. He set up a trust comprising himself, Burugula Ramak-rishna Rao, Madapati Hanumantha Rao, and K.V. Ranga Reddy to oversee the running of the school.

Dr Tippa Reddy, a former professor of Osmania University, said, “The Nizam had several Telugu, Kannada, and Marathi-medium scho-ols across Hyderabad shut down, as he wanted only Urdu medium schools to function. What is now Koti Women’s College was a British Residency then.  The Narayanguda Girls High School was initially started in Badi Chowdi. Since it was denied recognition by Osmania University, permission was obtained from the Karve Institute in Pune.” Rama Reddy was the chairman of the governing bodies of several schools across Hyder-abad at that time.