Although the BBMP has served notices to idol manufacturers prohibiting the manufacture and sale of PoP Ganeshas, the sellers in Wilson Garden have no qualms about carrying on as usual, and seem to have no fear of being raided by the civic authority.

Three years after the ban on the manufacture and sale of Plaster of Paris(PoP) Ganesha idols by the state’s pollution control board in 2014, they continue to be sold in the city, placing its lakes and other water bodies at high risk of pollution once again this Ganesha festival. Are the authorities doing enough to spread awareness and enforce the ban? DC reports

The festival of the much loved Elephant God, Ganesha is here again and the city will soon be taken over by devotees erecting pandals in various localities and collecting donations to celebrate with the massive idols installed in them. The police will, as always,  be out in force  around the water tanks, where the idols are taken in  procession to be immersed.

But with the festival frenzy taking over, the authorities appear to be once again struggling to enforce the ban on use of Plaster of Paris (PoP) Ganesha idols that are harmful to the environment both because of the nature of the material, which is slow to dissolve in water and  the toxic paints used to decorate them.

Imposed by the Karnataka State Pollution Control Board (KSPCB) in 2014, the ban covers selling and manufacturing of the PoP idols, but going by the display of  idols across the city, it is clearly not working. 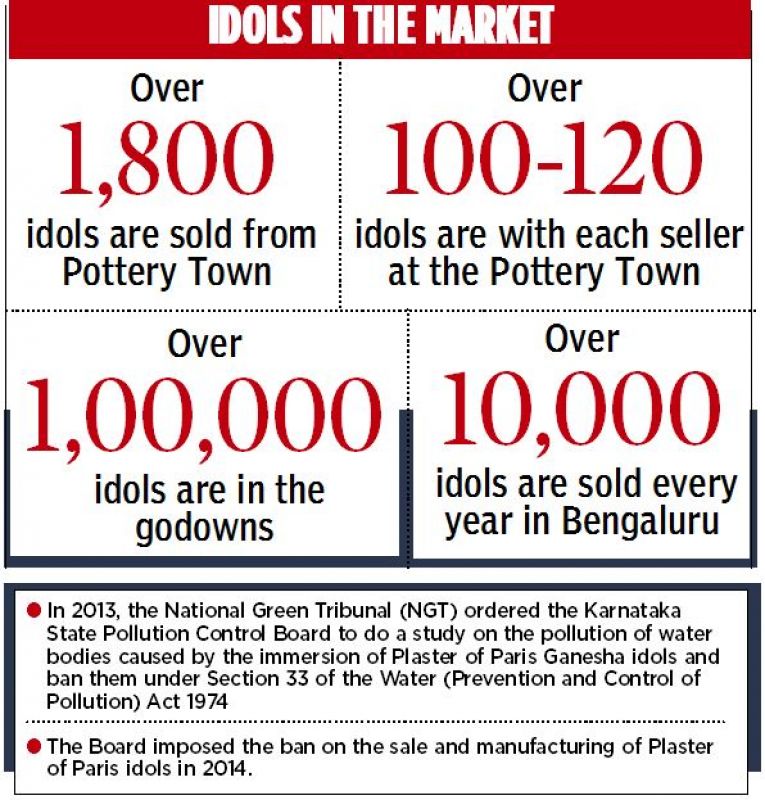 Although  the BBMP has served notices to  idol manufacturers prohibiting the manufacture and sale of PoP Ganeshas, the sellers in Wilson Garden have no qualms about carrying on as usual, and seem to have no fear of being raided by the civic authority.

“I have PoP Ganesha idols worth Rs 500,000 in my warehouse. Most of the other  sellers in Pottery Town too need to clear last year's leftover stock.   So we are continuing to sell them, especially as there is hardly any demand for clay idols,” says Mr Madan, an idol manufacturer in Pottery Town, where the PoP idols are openly displayed for public viewing.

The scene is similar in Wilson Garden where PoP Ganesha idols are on display as usual as the manufacturers vie to attract buyers. Ask one of them if he is  scared of the authorities  raiding him and  he says, “Nobody has raided us till  now and no one will. We are selling the PoP idols because there is a huge demand for them.” One seller offered to sell PoP idols of different sizes for a price  going up to Rs 32,000.

Ask chairman of the Karnataka State Pollution Control Board, (KSPCB),  Laxman about the open sale of PoP Ganesha idols in the city and he admits the sellers will want to clear their old stock, but claims the board is keen on stepping up enforcement of the ban this year.  “Last year we were able to curb sale of PoP idols by 60 per cent, but this year we are hoping to enforce it 100 per cent with the help of civic authorities. We also want the public to boycott buying of PoP idols,” he stresses.

The board had given some leeway to  idol manufacturers last year with a warning that Section 33 of the Water (Prevention and Control of Pollution) Act, 1974 would be strictly enforced in 2017.  Whether it will keep its word remains to be seen.

It has, however, taken another  step to prevent pollution of water bodies. This year mobile immersion tanks for the Ganesha idols will be available at 32 locations across the city to prevent the bigger water bodies from being polluted.

BBMP readies lakes, tanks for festival
While Plaster of Paris (PoP) Ganesha idols continue to be sold across the city despite the ban on their manufacture and sale , BBMP commissioner , Manju nath Prasad claims the civic body is trying to step up awareness about  eco-friendly Ganeshas through street plays, and campaigns in schools to persuade people not to buy them.

“Through our campaigns we have requested the people not to buy PoP idols and opt for chemical- free eco-friendly Ganeshas. We have also requested the public not to use plastic or polythene buntings for the  festival and to stop littering the roads near temples with puja remanants and flowers,” he explains. Ask him whether PoP idols will be allowed to be immersed in the designated lakes and mobile tanks, and the commissioner says there will be no restriction on this as people’s religious sentiments are involved. “We will not stop them from being immersed as this is a matter of people’s sentiments. But we will have our men  pull out the immersed PoP idols soon after the devotees leave the spot," he assures.

The BBMP, which has made arrangements to immerse Ganesha idols in 36 lakes in the city,  will also provide mobile and temporary tanks at 42 and 269 locations respectively to contain the pollution of water bodies to whatever extent possible. The immersion of idols will be stopped after 10.30 pm and no bursting of crackers or use of loudspeakers  will be allowed during the immersion.

Clay idols don’t pollute, should be the obvious choice: Mahesh Kashyap, environment consultant
Plaster of paris (PoP) Ganesha idols cause environmental pollution as the material is  not easily soluble in water and the paints used to decorate them contain heavy metals. Once immersed, the PoP idols dissolve slowly, gradually releasing all their harmful chemicals into the water, increasing its acidity and making it toxic and harmful to fish and other aquatic creatures. This has been confirmed by a study  by the Central Pollution Control Board (CPCB), which found that after immersion of the idols in water, its acid content  rose significantly. People, who consume such water can also fall sick.

Sometimes as the PoP does not easily dissolve, the idols are  found  floating in water after immersion. And with the plastic and other materials used to decorate them being non- biodegradable, they are taken to landfills -  where they can seriously impact the environment - after being fished out from the water they are immersed in.

The Karnataka State Pollution Control Board (KSPCB), which failed to enforce the ban on PoP idols fully last year, had promised to enforce it better this year. Its chairman had claimed last year that it had half succeeded in enforcing the ban, and was looking for 100 per cent success in 2017. But the reality is far different as you can see a number of big PoP Ganesha idols displayed in front of the Syndicate Bank zonal office and in several shops in the city, besides footpaths, where the PoP idols are placed covered in plastic sheets to protect them from rain. Clearly, what is needed is much stricter enforcement of the ban by the agency. The fact that a Ganesha idol made of clay dissolves faster in water and does no harm to marine life or the environment, makes it the obvious choice.

■Banned Plaster of Paris Ganesha idols pop up across Bengaluru
■Did you know, a 1-foot Ganesha costs Rs 1,000... and it’s made of clay!

Baseline tests mooted ahead of reopening of schools in AP

Adjournment motion on Polavaram in LS