Yellapura: Over 200 people are stranded due to landslides at Kalache village in Uttara Kannada district of Karnataka.

Kalache is situated amidst the Western Ghats, about 30 km from the taluk headquarters of Yellapur. The only road from Yellapur has been damaged due to the landslide on Friday.

"The heavy rain has resulted in the landslide in our village. We are completely disconnected. The landslide has severely damaged the road connectivity and water is flowing on the road making it impossible for the rescue teams to come to our village," Ravindra Upadya, a resident of Kalache village told Deccan Chronicle over the phone.

"The landslide is severe in some places. Yesterday a woman died after a mudslide on her house. People are scared and concerned," he said.
The villagers had contacted the officials and elected representatives. They said District Incharge Minister Arabail Shivaram Hebbar had sent a rescue team but the team could not make it to the village as the road was severely damaged. 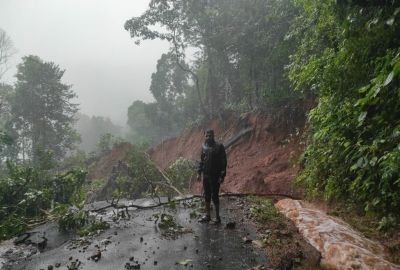 "The village had only one road which has been damaged now. The only alternative is to walk from Hebbakumbri. But that too may be difficult now. It may take half a day from there to walk to our place for the rescue team," he said.
Officials said a team has been sent again today for the rescue operation.