Hyderabad: 31 animals crushed to death on rail tracks every day

The ministry said that zonal railway divisions had been working on action plans in coordination with the forest ministry to prevent the deaths of animals and elephants crossing the tracks.

Hyderabad: Thirty one animals die every day on railway tracks, as per records with the railway ministry. Railway minister Piyush Goyal told the Parliament that 35,732 animals, including 65 elephants, had been ran over by trains in the past three years. The number of such deaths has been increasing every year, data shows.

West Central Railways recorded the highest number of animal deaths. South Central Railway which covers most portions of the two Telugu states witnessed 110 deaths so far in 2019. The ministry said that zonal railway divisions had been working on action plans in coordination with the forest ministry to prevent the deaths of animals and elephants crossing the tracks. It includes preventive measures such as imposition of speed restrictions in identified locations where animals cross the tracks and provision of signage boards for drivers.

The ministry believes that there is a need to sensitise train crew and station masters on a regular basis. 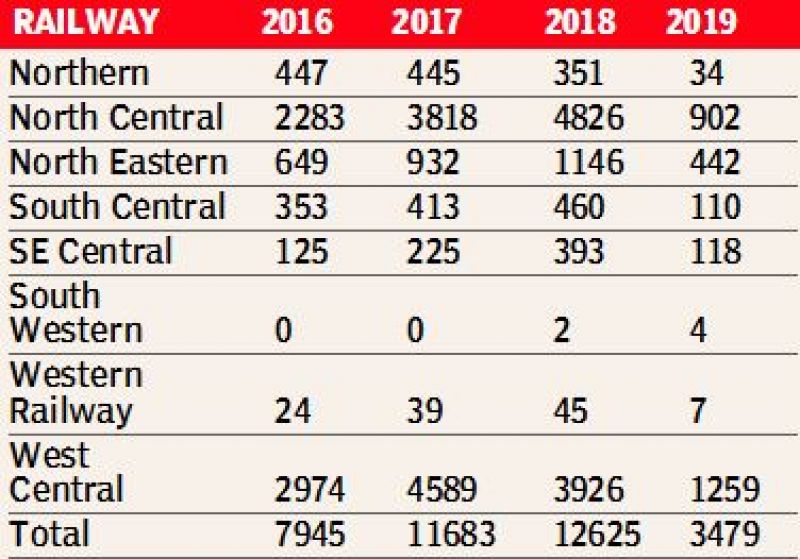 To deal with elephant deaths, the minister said that forest department staff will be deputed in railway control offices to liaison with the railway and elephant trackers regarding the movement of animals so that the drivers are warned. The forest ministry has issued notifications to chief wildlife wardens to implement precautionary measures for minimising the deaths of animals caused by trains.

Wildlife experts say that in 10 years, the deaths of animals have soared. The reason behind such incidents is the countrywide increase in high speed rail infrastructure. Many of these projects cut through sensitive natural zones where animals live. Deputy conservator of forests A. Shankaran, who is the officer on special duty, wildlife, said, “This has been a lingering issue but caught the eyes of  policy makers when three elephants were hit by a train in West Bengal.”

He said that options to reduce animal deaths include fencing the areas where animals cross the railway tracks frequently and construction of underpasses and ramps for the movement of elephants at identified locations.

“We cannot control the movement of wild animals, but we can provide the facilities which can help in reducing the deaths,” Mr Shankaran said.

Experts said the West Central Railway, which accounted for the highest number of animal deaths, passeed through one of the biggest forest ranges which included the Satpura National Park, Vindhyachal, Bharatpur, Satna and Jabalpur. South Western Railway recorded the least number of death because it passed through the ghats which had many bridges. There were many water bodies in Western Ghats so that animals don’t have to cross the railway lines.

Regarding the South Central Railway, an official said, “Most animals that are killed on the tracks are cattle. The death of the protected animals takes place mostly in states like Assam, West Bengal and Jharkhand where the track passes through thick forests. Although drivers reduce the speed in animal sensitive areas, but it’s difficult if an animal suddenly comes in front of the track.