Chennai: In the midst of all the sobbing over the acute drinking water crisis in Chennai, a 75-year-old environment activist riding an old bicycle is doing his bit campaigning for the restoration of seven ancient ponds that have disappeared years ago under human encroachments in his Padi-Korattur-Ambattur area.

Among all those hundreds of buildings that have come up over the parched water bodies is a large fish-market built by the Corporation of Chennai close to the Chennai-Tiruvallur highway at Padi. It was inaugurated with much fanfare by none other than Chief Minister Edappadi K Palaniswami in 2017 and was closed-sealed following a stinging order by the First Bench headed by Chief Justice Sanjay Kishan Kaul, presently a judge of the Supreme Court.

The petitioner in this case was none other than our septuagenarian hero, N Shanmugam, who retired as a PWD contractor to take up public causes and environment issues. “I had filed that petition and was very happy when the Honourable Court quickly saw the truth in my plea that even the Government did not bother encroaching a water body, instead of restoring it through de-silting and rainwater harvesting”, says Shanmugam, who has managed to get a few roadside encroachments cleared through such court orders, though the larger violations remain like sore thumbs on the gobbled up ponds. 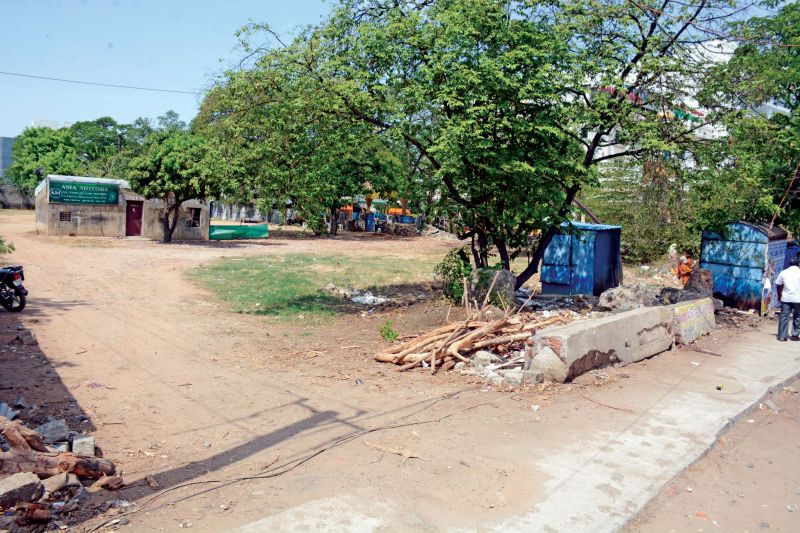 This dead pond near Padi flyover is most likely to get restored by Chennai Corporation, following Shanmugam's petition to Chennai district collector. (Photo: DC)

“Why should the government remain satisfied with merely sealing that fish market instead of demolishing the structure and restore the pond as a perennial source of water to the local people, besides charging the groundwater table there?” wonders the elder environmentalist.

While many have faulted him, even ridiculing and taunting, for his wars against the government and private parties who have either ruined the water bodies through encroachments or failed to maintain them by de-silting, some of the locals hail Shanmugam as a Green Messiah. “He has been fighting the high and mighty. 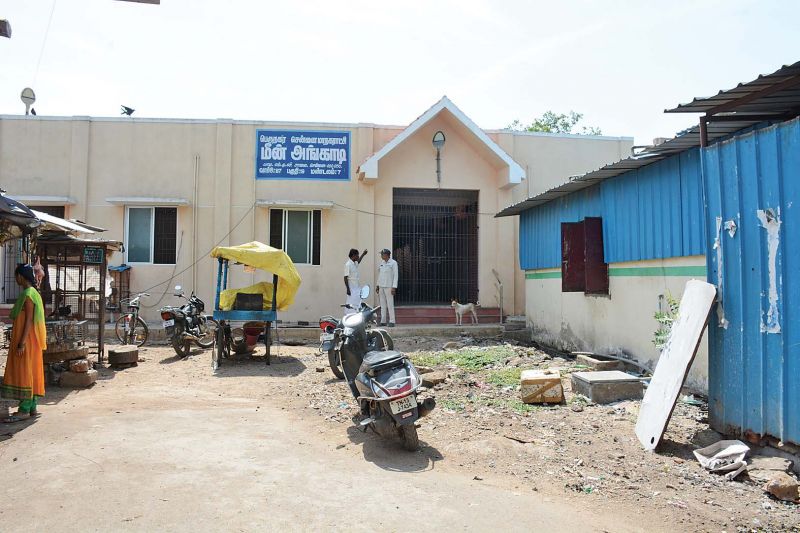 This fish market inaugurated by the CM has been sealed on orders from the Madras High Court since it had been built on the land where a pond had existed sometime ago. (Photo: DC)

Thanks to his efforts, the dried pond at Padi Bridge will soon be taken up by the city corporation for clearing encroachments and de-silting”, says J Kantha, local resident.

“I am now 72 and I am very sad at all these encroachments coming up and the ponds disappearing. I still remember how as kids we used to play at this pond and how the farmhands passing by would quench their thirst with its water and rest for a while under a large tree on its bank. The tree too has disappeared”, says the elder woman, looking very distraught.

And as a parting shot, she adds, “My father used to tell us there were hundreds of lakes and ponds in Madras district (it later became Chennai, Tiruvallur and Kancheepuram). If only the government undertakes the difficult but necessary project to restore all those water bodies by clearing encroachments, we will never suffer water shortage”.