Chennai to get water from Veeranam lake

Level in the four main lakes — Poondi, Chembarambakkam, Cholavaram and Red Hills — in Chennai region,  has been declining. 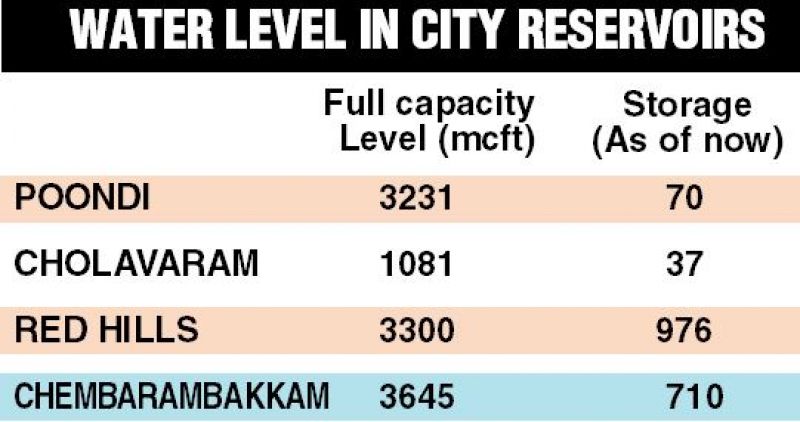 The  CMWSSB kept looking at sky for rain, which eluded Chennai region, but lashed southern and western regions.

“At present, we supply of 650 MLD of water in the Chennai city against 830 MLD and there is no acute water scarcity. We are also hopeful of receiving water from Veeranam lake soon, after which we will slightly increase the water supply,” said an official, CMWSSB.

The official also maintained that main lakes in Chennai had enough storage to meet the need of drinking water.

The four reservoirs in Chennai region at present have total storage of 1,793 million cubic feet (mcft) and this can be enough to meet drinking water supply for next two months.

“By this time last year, the same reservoirs hardly had 100 mcft and Chennai grappled with water crisis,” an official said adding that water crisis can be tackled easily this year.

“Going by the current scenario, Cauvery water might reach Veeranam lake in the next three to four days. Further, water can be tapped from the beginning of August to Chennai,” a senior engineer said.

However, PWD officials will consult district administration before water release to Chennai, he added.

“Even as there is no water scarcity in the city unlike last year, water from Veeranam lake always remains a paramount source. Further, there should be a proper water management plan till onset of northeast monsoon by water managers,” said S. Janakarajan, professor of Madras Institute of Development Studies, (MIDS),  and a water management expert.

“It is good that Mettur dam is brimming with  water and we will receive water from Veeranam lake,” an official of CMWSSB told DC.