The number of students who scored above 481 marks also fell steeply with only 9,402 students getting above 481 out of 500 whereas 38,613 students secured marks above 98 percent.

Chennai: As many as 92,424 centums were scored last year in the class 10 exams. But this year, the number of centums has witnessed a steep fall as there were only a few centums in maths and science subjects, reportedly due to creative questions.

The number of students who scored above 481 marks also fell steeply with only 9,402 students getting above 481 out of 500 whereas 38,613 students secured marks above 98 percent.

“To prepare the students for competitive exams, the directorate of government examinations had included around 10% creative questions in both maths and science. Due to this, the number of centums fell to three digits, thus creating value for full marks,” sources said.

In science 17,481 students got 100 out of 100 marks and in maths, 13,759 students scored full marks last year. An astronomical number of 61,155 students scored centum in social science, rendering full marks as a meaningless exercise. “The question papers of class 10 board exams this year were of a high standard.  They included many creative questions in science and maths, which reduced the number of centums considerably” said  N.Vijayan, founder and principal of Zion Matriculation Higher Secondary School in Tambaram.

Many government schools which got 100% results did not have a single student scoring full marks. Students with total marks as high as 495 out of 500 were not able to score single full marks this year. Headmasters said that a large number of students scored less than 400 marks this year whereas around 40 per cent students scored above 400 marks last year. The number of students who scored above 400 marks was nearly reduced to half as only 21.8 per cent students were able to get scores above 80 per cent.

Continuing with the good performance in the SSLC exams, 1,687 schools out of 5,456 government high and higher secondary schools (31%) achieved 100% results, an increase of 2.5% compared to the previous year. 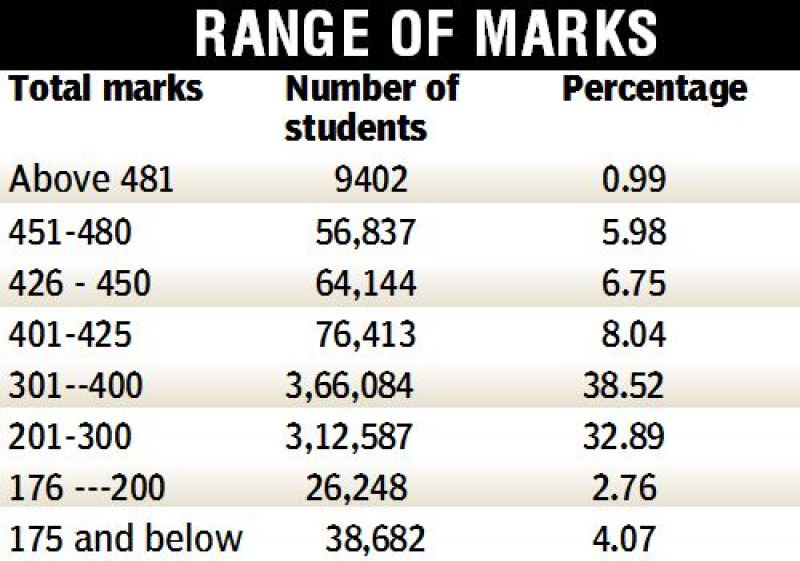 This is really a stellar performance considering that only 362 schools got full results in 2011-12.  But the pass percentage has witnessed a slight dip from 91.59 per cent last year to 91.36 per cent this year.

“Earlier, government schools in the southern districts alone would get full results. It took us a while to bring the teachers on board. After years of hard work, now we are reaping the rewards,” said an official from the school education department. The department has set a goal for all headmasters and district level officers to improve the pass percentage. The same was stressed during all review meetings.

A headmaster from government school said, “Apart from conducting special classes during the weekends, teachers in government schools are also giving individual attention to struggling students and this has helped us in getting good results.”

However, schools with large strength are still struggling to achieve full results. For example, the government girls schools in Virugambakkam and Ashok Nagar have missed the full results, just by a whisker. “From our school, 520 students wrote SSLC exam this year and only 7 could not clear the exam. Among the seven students, five students failed a single subject and the other two students failed in two subjects,” said R.C.Saraswati, headmistress, Government Girls Higher Secondary School, Ashok Nagar.