Swing sets at Indira Park and a slide ladder at the Chacha Nehru Park are in a bad shape.

Hyderabad: Most parks and gardens maintained by the GHMC have lost their charm for kids as the play zones dedicated to lack outdoor play equipment.

GHMC maintains 49 major parks, 521 colony parks and 288 tree parks in the city. Almost all major parks have recreation facilities. These parks are used for walking in the morning and evening, but are also areas where children from lower middle class and poor families play.

The Indira Park and the Chacha Nehru Park at Masab Tank have specific zones allotted for kids. These zones are equipped with swing sets, slides, ladders and see-saws. More than half of these are damaged or dysfunctional. The Public Garden has six playing equipment but there are a few visitors due to the restrictions on the general public in the central lawn, 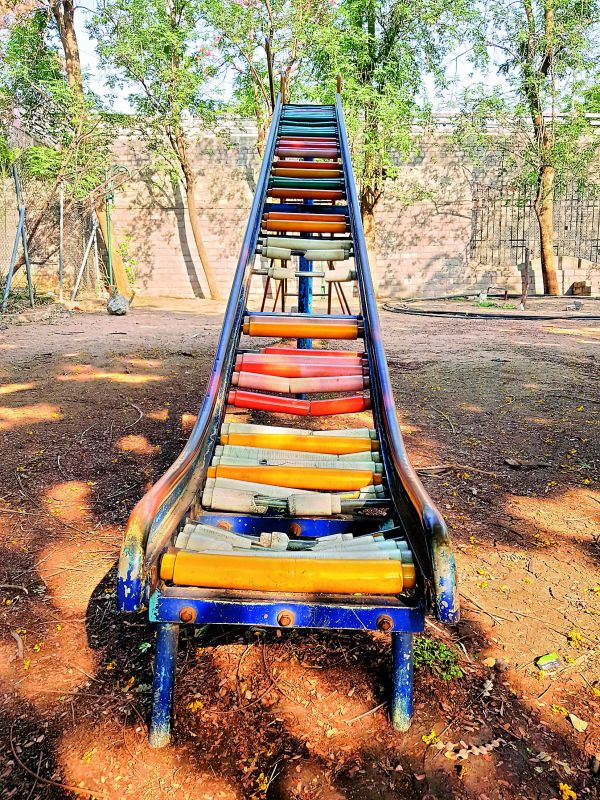 The park is maintained by the horticultural department. A large number of children head for parks during the summer vacations but the GHMC has not got them ready in time by repairing the play equipment.

Besides, kids are not allowed to bring playing material. In this situation, kids are forced to tag along with their parents or play games like hide and seek, which can be done at homes.

Mr M.A. Nayeem who came to Indira Park with his family, said, “We came here as our children insisted on an outing, but they were disappointed seeing the facilities.” He said well-to-do families could afford private amusement parks, but for middle class and poor families these parks were the main source for relaxation. He appealed to the authorities to repair the defective playing sets and add new equipment.

He said, “Recreation also provides children the chance to learn, consolidate, and practice the skills necessary for further growth and learning. In parks they can learn and play. There is a need to develop these parks to be more children-friendly.”

Union home ministry to restore with all existing visas with few exceptions.