New Delhi: A week after Chandrababu Naidu's Telugu Desam Party exited the NDA alliance at the Centre over the demands for 'special category status' for Andhra Pradesh, BJP national president Amit Shah on Friday wrote to the Andhra Chief Minister and TDP supremo, saying "TDP's decision to quit the NDA family was unfortunate and unilateral".

"This decision is both unfortunate as well as unilateral. It is a decision; I am afraid, will be construed as being guided wholly and solely by political considerations instead of developmental concerns," Amit Shah wrote in his letter.

Amit Shah further wrote, "Andhra Pradesh figures very prominently in our agenda of National Development and it is widely known that the Union Government led by Hon'ble Prime Minister Shri Narendra Modi has left no stone unturned in ensuring the growth and prosperity of Andhra Pradesh."

TDP, once the BJP's biggest ally in south, pulled out of the Centre on March 16.

Chandrababu Naidu's TDP is trying to bring a no-confidence motion against the government in the Parliament, after arch-rival Jagan Mohan Reddy's YSR Congress sent a notice.

The two parties are seen as involved in one-upmanship ahead of 2019 Andhra Pradesh Assembly elections.

Shah said, "Since the discussion of bifurcating united Andhra Pradesh till the present, it is the BJP that has led the voices of safeguarding the welfare of Telugu people in both the Telugu states (Andhra Pradesh and Telangana). This is in direct contrast to the Congress Party, which not only managed the bifurcation but also showed zero sensitivity towards Telugu people, which is in line with their historic apathy to Telugu community." 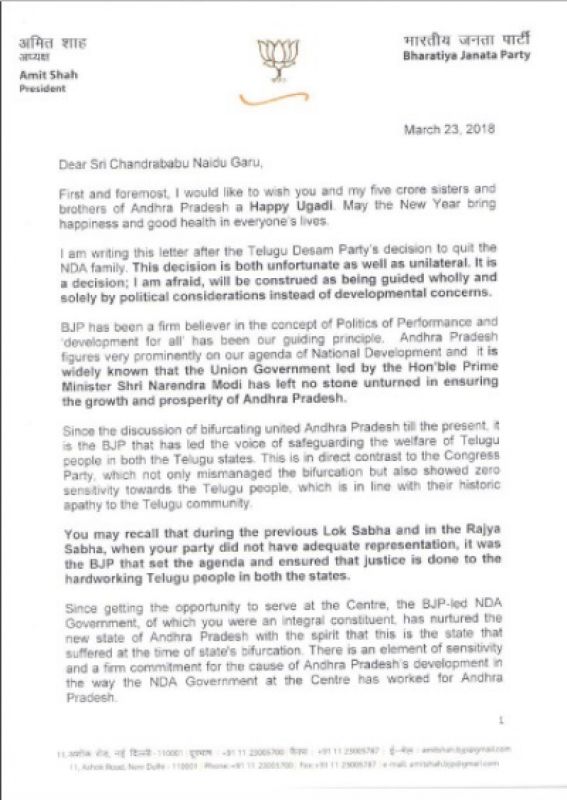 Report cases of parents' death, appeals of adoption to police or CWCs: TS

No lockdown, only increased care: KCR