Meanwhile, a shoe was hurled at Kanhaiya as he was about to address a seminar at the university on Thursday.

A man sitting in the audience threw a shoe at Kumar but it missed him and fell just ahead of the stage. The seminar on 'Constitutional Rights' was organised at Sundrayya Vignana Kendram (SVK) at Baghlingampally here, a building run by Left parties. 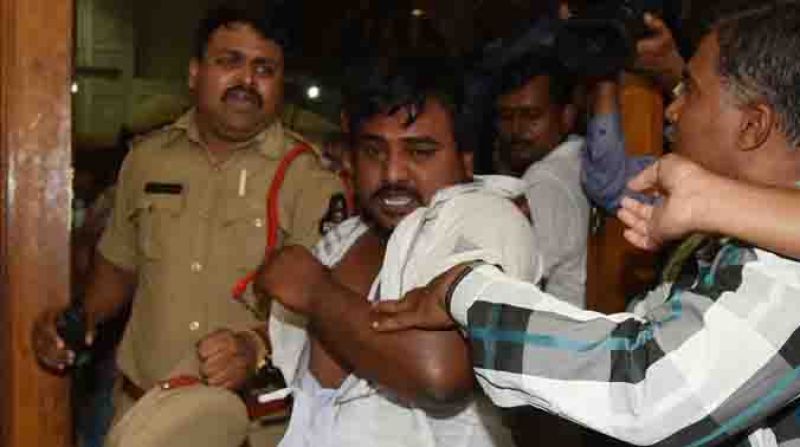 The man who hurled a shoe at JNU students' union leader Kanhaiya Kumar is taken away by the police. (Photo: S Surender Reddy)

Police took away the man even as commotion prevailed in the hall for sometime.
The meeting continued after the incident.

Kumar is on a two-day visit to Hyderabad and Vijayawada, his first after being released from jail. He was imprisoned on charges of sedition.

The struggle in JNU is an extension of the campaign in Hyderabad Central University (HCU) for justice to Rohith Vemula, he said. There is a similarity between HCU and JNU, Kanhaiya said, adding that both institutions were fighting for the autonomy of universities and for social justice.

"This fight of ours is to save the country, save democracy and bring justice for Rohith Vemula," said the JNU students' union president.

Citing struggles in FTII, Aligarh Universtity, HCU and JNU, he claimed that campuses in India were becoming war zones.

The development agenda of the NDA government has taken a back seat during the last two years of its rule, he alleged.

Read: Kanhaiya Kumar stopped at the gates of Hyderabad University

Kanhaiya also said he would not campaign in the coming elections in four states.

Kumar was not allowed to enter the HCU campus on Wednesday evening where he was scheduled to address students agitating over the suicide of Dalit scholar Rohith Vemula in January this year.

Kumar, who came with Rohith's mother and brother to express solidarity with students, was greeted with slogans for and against him at the gate after the University issued a notification banning entry of outsiders, including political parties, media and other social/student groups. The police too kept a strict watch on the main gate.

After landing in the city on Wednesday, the student leader had blamed the government for blowing up the JNU issue (students screaming 'anti-national' slogans). He said this was to divert attention from Rohith's suicide and its aftermath.

Love jihad is a word manufactured by BJP to divide the nation: Gehlot