Did not disconnect Internet, water: HCU authorities hit out at rumours

Hyderabad: Hyderabad Central University (HCU) on Thursday claimed that water and Internet facilities on the campus were 'never' disconnected by the authorities but 'temporarily' halted as these were affected by the ongoing protests.

Refuting the allegations by a section of students that varsity authorities disconnected these facilities for the past two days, the officials today said water supply was temporarily stopped as some miscreants damaged the pump.

"The university never cut off water nor electricity on the campus. Some miscreants damaged the pump on the campus and (it) has been since restored. It may also be noted that there is a general water shortage to the campus for the last two months," the officials said in a statement.

Read: Kanhaiya Kumar stopped at the gates of Hyderabad University

After the violence by some students, the varsity administration is making all efforts to restore normalcy on the campus. The Vice-Chancellor has already declared that the classes will resume from Monday, the statement said.

There is no restriction of movement on "legitimate or authorised" members of the university community. The administration has decided to restrict the entry of only the outsiders on the campus, it added.

Meanwhile, a shoe was hurled at Kanhaiya as he was about to address a seminar at the university on Thursday.

A man sitting in the audience threw a shoe at Kumar but it missed him and fell just ahead of the stage. The seminar on 'Constitutional Rights' was organised at Sundrayya Vignana Kendram (SVK) at Baghlingampally here, a building run by Left parties.

Police took away the man even as commotion prevailed in the hall for sometime.
The meeting continued after the incident. 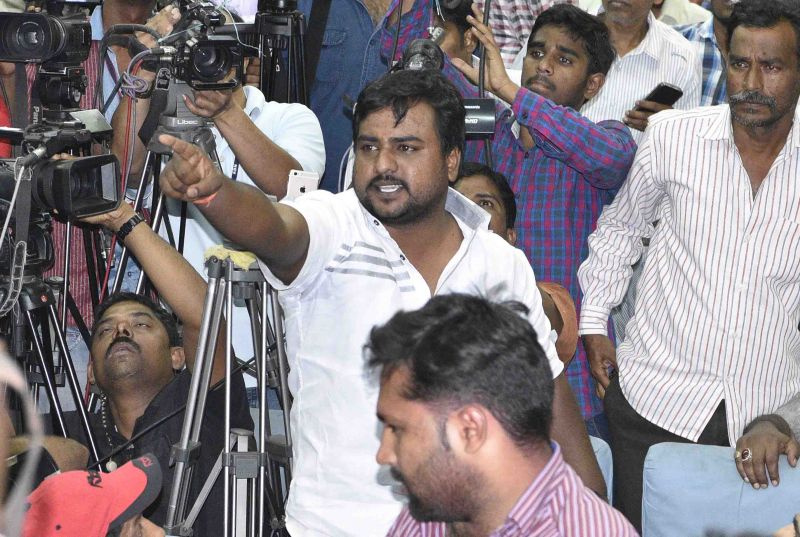 The man who threw a shoe at JNU students union president Kanhaiya Kumar at Sundarayya Vignana Kendram, shouts after flinging it. (Photo: DC)

Kumar is on a two-day visit to Hyderabad and Vijayawada, his first after being released from jail. He was imprisoned on charges of sedition.