A school bus attacked by protesters in Gurgaon against release of film Padmaavat. (Photo: ANI)

Gurgaon: Despite prohibitory orders, hundreds of Shree Rajput Karni Sena supporters blocked traffic at the Khidki Daula toll plaza on the Delhi-Jaipur National Highway as they protested against the release of controversial film 'Padmaavat' on Thursday.

Protests took a violent turn after protestors attacked a school bus carrying children. Protesters threw stones at a bus of GD Goenka School near Bhondsi in Sohna, breaking its windows, according to a report in NDTV.

Students from Classes 2 to 12 were in the bus, along with teachers and staff.

Several younger children were seen crying in a mobile phone video, frightened as they crouched on the bus floor with their hands covering their mouth. 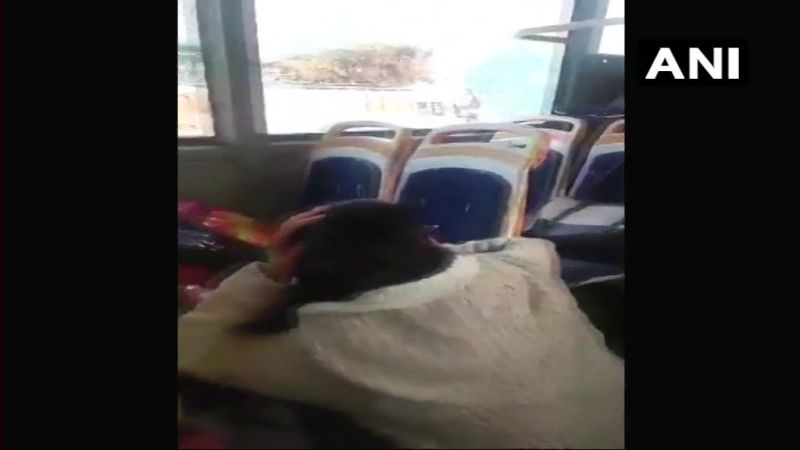 The teachers and staff complained that the police could not help them as the protesters did not care.

"There were policemen, but no one was listening to them. The protesters didn't care," a teacher was quoted as saying by NDTV.

Earlier on Wednesday, a Haryana Roadways bus was set on fire near village Bhondsi in Gurgaon allegedly by protesting activists of Karni Sena, officials said.

Some of the protesters even damaged toll booths and vehicles, police said. They assembled at toll plaza at 11:30 am and stalled the movement of vehicles for half an hour, an official said.

Traffic was normalised after the police dispersed them, he said adding the protesters raised slogans against filmmaker Sanjay Leela Bhansali.

However, there was no loss of life in the incidents, officials added.

The police said that restrictions under section 144 of the CrPC had been imposed but denied that bars and pubs in the city had been ordered to remain closed.

The Gurgaon administration had on Tuesday imposed prohibitory orders till Sunday to maintain law and order in view of the Shree Rajput Karni Sena threatening to target theatres against the scheduled release of Padmaavat on Thursday.

There are over 40 multiplexes and cinema halls in Gurgaon.

"Following imposition of section 144, there is prohibition on the presence of people carrying firearms and other articles capable of causing injury, raising slogans and exhibiting placards within 200 meters radius of cinema halls and multiplexes from January 23 to January 28," Singh said.

The Supreme Court had earlier paved the way for the all- India release of 'Padmaavat' and stayed notifications and orders issued by Madhya Pradesh, Rajasthan and Gujarat all ruled by theBJP prohibiting exhibition of the film.

■Protesters take to streets, block roads ahead of 'Padmaavat' release

Kerala to have five agro ecological zones to boost agriculture