The Mumbai coastline was put on high alert after some suspicious men were spotted near a naval base. (Photo: PTI)

Mumbai: A day after five suspicious men clad in Pathani suits were spotted near a naval base at Uran in Raigad district of Maharashtra, the Western Naval Command of the Indian Navy has called off its search for the suspects. However, other agencies are still hunting for the men and Mumbai continues to remain on high alert.

“As far as Indian Navy is concerned, operations based on yesterday's sightings of suspected terrorists are concerned are over. Sanitisation of naval areas has been undertaken. Navy is maintaining close liaison with local police/other agencies for further updates/developments,” read a statement issued by the Indian Navy.

While at first, all naval officers were asked to be vigilant round the clock, the Navy now has directed them to go back to their normal shifts but has asked them to remain alert.

“Insofar as the state of alertness is concerned, Indian Navy maintains a high state of alert/ tight vigil at all times in consonance with the prevailing circumstances,” the statement added.

While the Indian Navy has scaled down the high alert for its territory, senior Maharashtra police officials revealed that Mumbai continued to be in a high state of alert.

The Navi Mumbai police which has deployed the majority of its force in Uran is conducting continuous search operations for the second consecutive day. 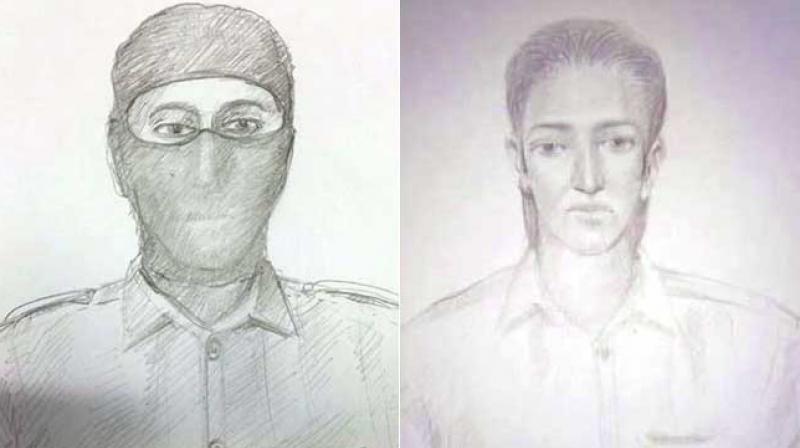 On Thursday night, the police had released sketches of the two suspects who were spotted by school children, leading to a high alert being sounded along the Mumbai coast and adjoining areas.

"As per the reports, five to six persons were sighted in Pathani suits and appeared to be carrying weapons and backpacks," Naval spokesman Cdr Rahul Sinha had said.

It was two school students in Uran who had allegedly spotted five suspicious men on Thursday morning. A schoolgirl who was on her way to school at around 6.30 am saw five armed men near the Uran bus depot. Then, at around 6.45 am, a boy who was at home, getting ready to go to school, also claimed to have seen a group of armed men.

The children then told their teacher in school about it. The school authorities immediately informed the Uran police, who alerted senior officers from the Navi Mumbai police about the sightings.