The CBI had registered the sexual exploitation case against Gurmeet Ram Rahim Singh in 2002 on the directions of the Punjab and Haryana High Court. (Photo: PTI)

Chandigarh: Haryana and Punjab were maintaining maximum alert ahead of the court judgement in a rape case against Dera Sacha Sauda chief Gurmeet Ram Rahim Singh on Friday.

As a precautionary measure, government has ordered closure of schools and colleges in Panchkula district on August 24 and 25, Panchkula Deputy Commissioner Gauri Parashar Joshi told PTI on Wednesday.

Over 35,000 followers of the Dera are estimated to have already reached and many more are still arriving at the sect's Sector-23 based 'Naam Charcha Ghar' (congregation/prayer centre) in Panchkula to show their solidarity with the sect chief, who has been asked to appear in person in the special CBI court on Friday. Joshi said that the administration and police were keeping an eye to ensure that law and order is maintained.

There is heavy police and para forces deployment near the routes leading to the district court complex in Panchkula, where the lawyers have suspended work for three days from today to avoid inconvenience to the public visiting the courts.

When asked if Dera chief will appear before the court in Panchkula on Friday, a spokesman of Dera Sacha Sauda on Wednesday said that the sect and its head has always followed law and will do so in future also.

"We have always followed due process of law, never have we gone out of law's purview and never ever will we do so," he said.

When asked if Gurmeet Ram Rahim Singh will appeal to his followers to help maintain law and order and peace, he said, "during his Satsangs (at sect head in Sirsa) in mornings and evenings, Guru ji always talks about humanity and things which will benefit humanity. He talks about tree plantation, organ donations, blood donation and helping out weaker sections".

Security forces in Haryana and Punjab have been taking out flag marches at many sensitive places. Haryana government has already clamped prohibitory orders in all its districts as a precautionary measure. 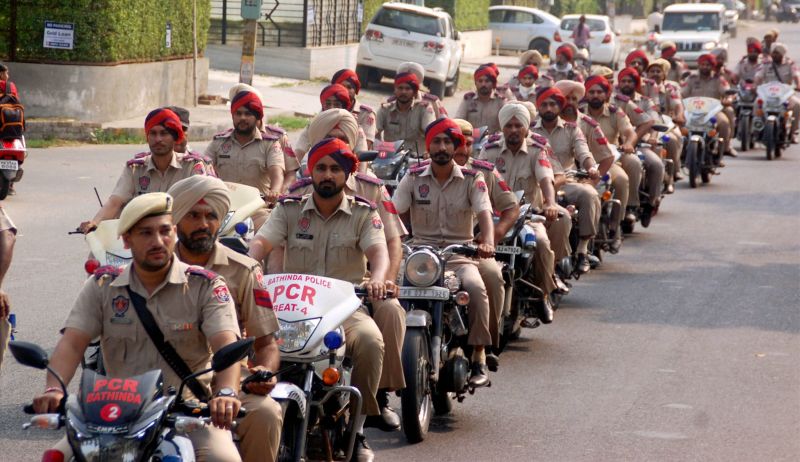 Police personnel march in a street in Bathinda on Monday. The securty has been beefed-up in the city in the view of the verdict in a case against Sirsa-based Dera Sacha Sauda chief Gurmit Ram Rahim Singh likely to be announced on August 25. (Photo: PTI)

Police have set up barricades at several places in the two states, besides their common capital Chandigarh, where security has been further tightened ahead of the court verdict.

Amid reports that the Dera followers could stock petrol, 'lathis' and other weapons at 'Naam Charcha Ghars', Punjab police has asked all its SSPs and other top ranking police officials to be alert against any such action by the followers if the court verdict goes against the Dera chief.

Haryana's Additional Chief Secretary (Home) Ram Niwas said that carrying of any kind of stick or weapon has been prohibited at 'Naam Charcha Ghar' of Dera followers in the state.

Authorities in Haryana are making every effort to ensure foolproof security arrangements, with a senior official firmly saying they will not allow a repeat of things as witnessed in November 2015 when there was a two-week tense standoff between the self-styled 'godman' Rampal's followers and the police in Hisar during which five women and a child had died.

Rampal was later arrested and close to 15,000 of his followers were evacuated from his sprawling premises in Hisar.

While Haryana DGP B S Sandhu has already toured sensitive districts in the state including Sirsa, Fatehabad, Hisar and other places during the past few days, his Punjab counterpart Suresh Arora yesterday took a whirwind tour of Bathinda, Mansa, Moga, Patiala, Ludhiana, Fatehgarh Sahib and Mohali districts, and checked preparedness.

Heavy police has been deployed in Bathinda, which shares its border with Sirsa, where the Dera headquarters in Haryana.

The Dera head has had a run-in in the past with Sikh radicals who had accused him of having allegedly dressed-up as the tenth Sikh Guru Gobind Singh in 2007, following which Punjab had remained on boil for many days.

Union Territory Chandigarh's Home department has declared the cricket stadium in Sector-16, which was associated with early training days of legendary Kapil Dev and has hosted several domestic and international matches, as 'temporary jail' on August 25.

Officials have said the 'temporary jail' can be used to confine people suspected of creating law and order problem on Friday.

Senior cops and administrative officers of Haryana, Punjab and UT Chandigarh have been holding confabulations to take stock of the security arrangements.

Haryana government has also requested the Centre to provide 115 companies of paramilitary forces, out of which many have already reached the state.

Duty Magistrates have been deployed at all locations in Haryana.

While Punjab had already received 75 companies of central forces, Haryana got 35 companies to maintain security.

Punjab Chief Minister Amarinder Singh warned against any attempts to disrupt the state's law and order in view of the upcoming judgement by Panchkula court.

"All steps were being taken to ensure that law and order is not disturbed in any way in the wake of the court orders", the chief minister said on Tuesday.

The CBI had registered the sexual exploitation case against Singh in 2002 on the directions of the Punjab and Haryana High Court after anonymous letters were circulated about the alleged rape of two 'Sadhvis' (female followers) by Singh.

However, Dera Chief has denied these charges.