Bengaluru: The much awaited launch of six-coach metro rake was finally flagged off by Chief Minister H.D. Kumaraswamy at Byappanahalli metro station on Friday. The longer rake is expected to provide relief to Namma Metro passengers during peak hours.

Mr Kumaraswamy said that Bengaluru would have a metro network of 250 km by 2021 and will help decongest the city. However, it was received with some skepticism by passengers considering the past track record of BMRCL’s missing many deadlines. “The foundation stone for the metro project was laid in June 2006 when I was the chief minister. I am happy that 12 years later metro rakes with six coaches are running,” he said. 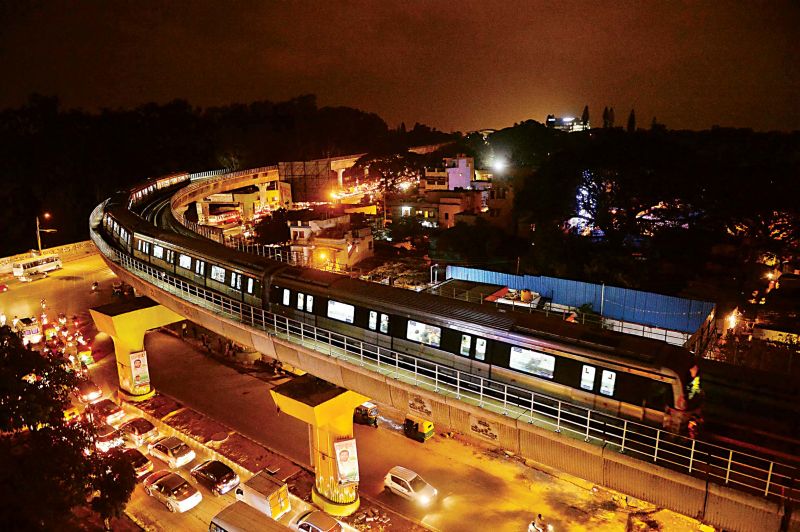 BMRCL Managing Director Mahendra Jain said that within one year of the completion of Phase 1, the average ridership per day has increased from 1.5 lakh to 3.6 lakh passengers. The revenue has also increased by 168% during the same period.

“The addition of coaches will not only increase the ridership but also enhance safety, comfort and convenience of passengers, especially women,” he added.

The Chief Minister, along with dignitaries, also travelled in the new six-coach train till Kempegowda Majestic Metro station. The new six-car train, with one coach exclusive for women, will run on the busy Purple Line, between Byappanahalli and Mysuru Road, and is expected to congestion during peak hours. Purple Line witnesses higher volume of commuters than Green Line.

With six coaches, each rake will now be able to carry 1,950 passengers, almost double from the existing capacity of 975. BMRCL currently runs 50 three-car trains on both lines in a day.

Bharat Earth Movers Limited (BEML) had handed over the first three intermediate cars to BMRCL on February 14. These coaches have been subjected to series of preparations, tests, trials, inspections and certification culminating in the sanction from the railway board and safety clearance from the Commissioner of Railway Safety (CRS). The second batch of three cars is expected to be delivered next month by the BEML.

Sops to employees
The BMRCL management has decided to extend financial and non-financial benefits to the operation and maintenance staff such as granting night duty allowance, hard duty allowance, washing allowance, transport allowance, general holiday allowance in place of weekly off falling on general holiday. Providing subsidized food at BMRCL canteen, recognition of Kannada Sangha of BMRCL staff, construction of creche where over 100 women employees are working are among others.

More 6-coach trains needed: Commuters
Marutesh T, a regular commuter said that just one train with six coaches is not sufficient to ease the congestion. The stations will be packed during peak hours. More trains with six coaches must be introduced.

Geetanjali Sharma, a techie who uses metro welcomed exclusive coach for women. In the present scenario, women miss trains during peak hours. However, more such trains must be operated and the metro network must be increased to ease congestion on road and reduce travel time. It is unfortunate that these trains are not available during weekends.

Cong MLAs to highlight plight of SCs, STs in slums