All parliamentary constituencies in Gujarat, Kerala, Dadra and Nagar Haveli, Goa and Daman and Diu will vote on April 23 in a single phase. (Photo: AP)

Mumbai: The third phase of 2019 Lok Sabha elections is covering the highest number of parliamentary seats. In this phase, 116 seats will go to polls.

All parliamentary constituencies in Gujarat, Kerala, Dadra and Nagar Haveli, Goa and Daman and Diu will vote on April 23 in a single phase.

06:15: Assam: Electronic Voting Machines (EVMs) & VVPATs being packed at polling booth no.199 in Dhubri after voting concludes there.

05:22 pm: A polling booth in Gir Forest has been set up for 1 voter in Junagadh 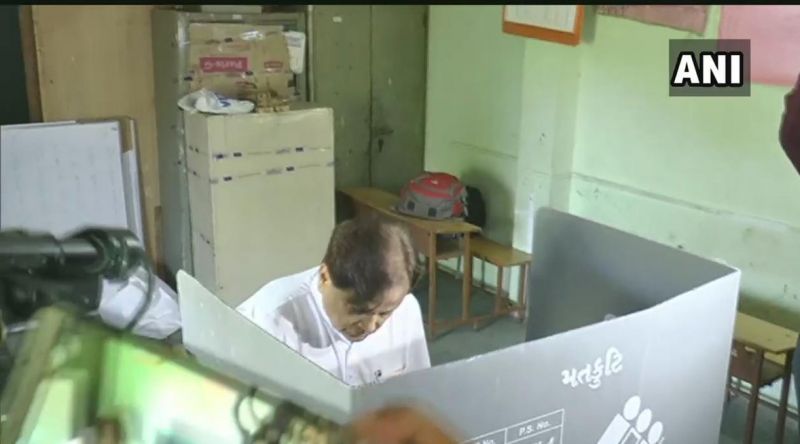 04:04 pm: Maharashtra: Shraddha, a bride, casts her vote at a polling station in Pune ahead of her wedding. Shraddha says, "It is our national duty. I felt a little nervous but I liked it".

03:50 pm: Samajwadi Party leader and SP-BSP-RLD candidate from Rampur, Azam Khan, and his son Abdullah Azam Khan, cast their vote at a polling station in the district.

03:30 pm: Odisha: A polling official at booth number 41 in Kantapal village in Dhenkanal passes away, after collapsing while on duty.

03:12 pm: West Bengal: Man standing in a queue to vote killed in clashes between Congress and TMC workers in Baligram, Murshidabad 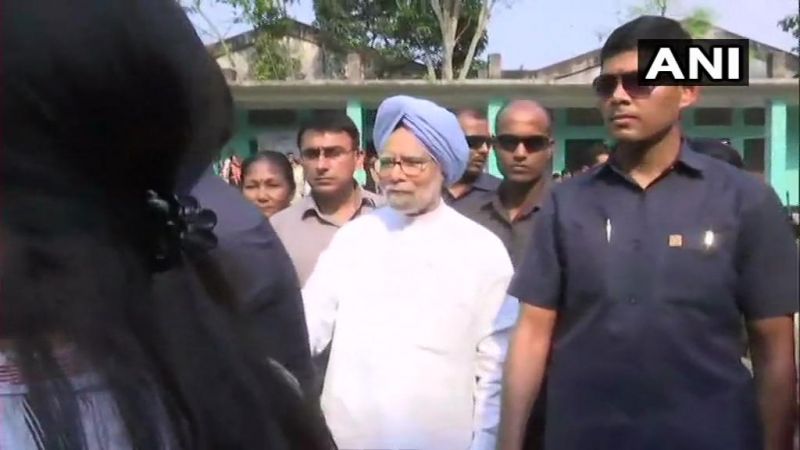 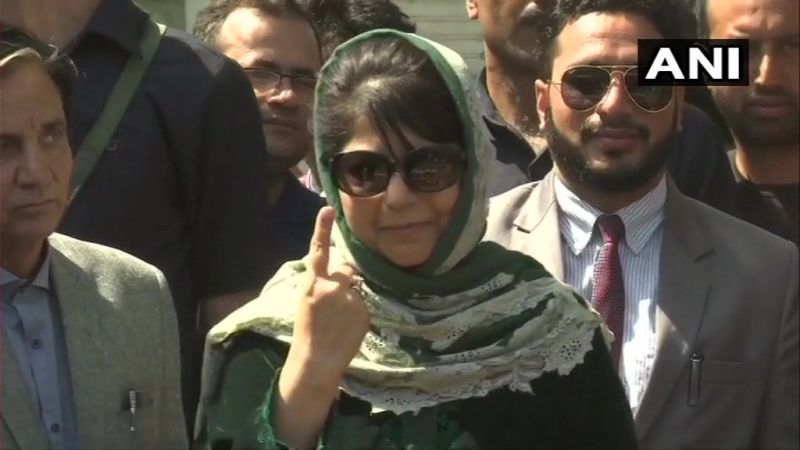 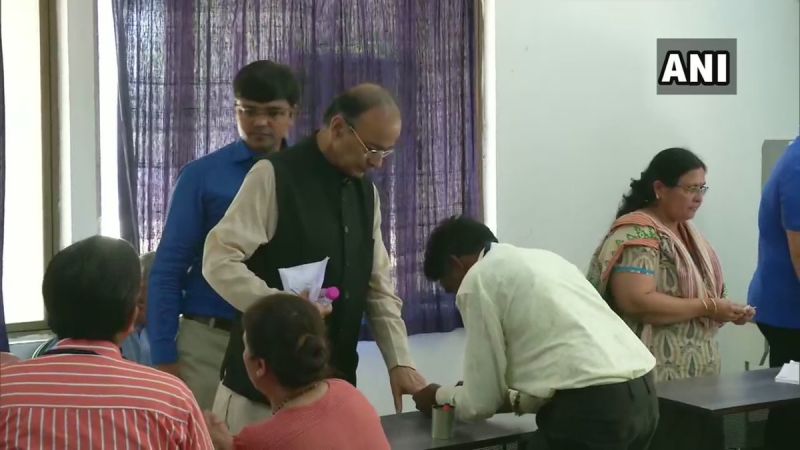 12:35 pm: After casting vote, Chhattisgarh CM Bhupesh Baghel said, “We have said what we had to say in favour of the party and our candidates, now voters will decide. They are the real judge.” 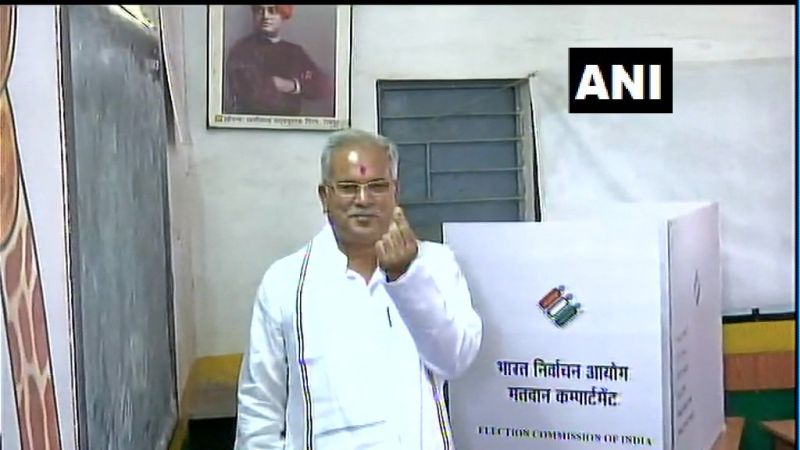 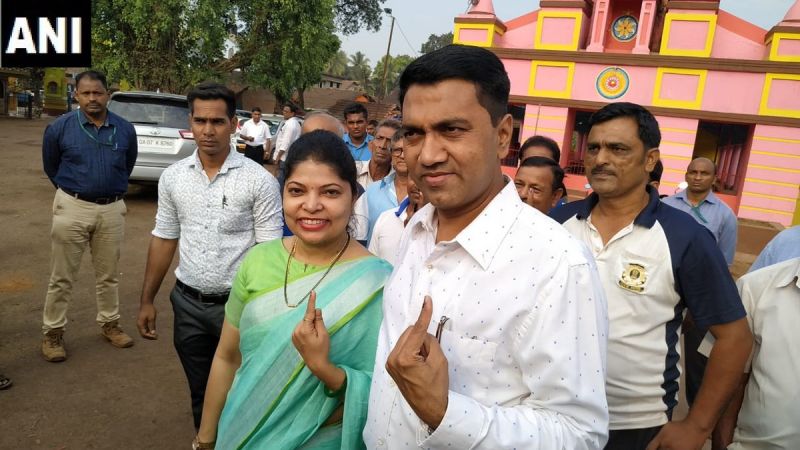 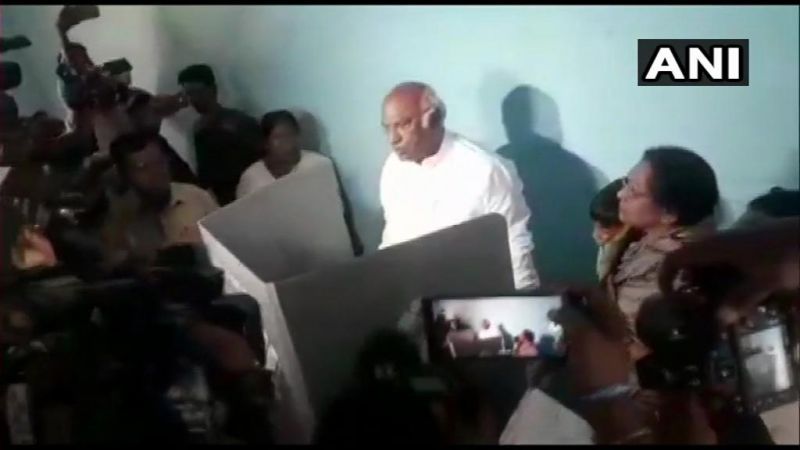 11:30 am: Wayanad: People queue up at a polling booth in Sugandhagiri to cast their vote. 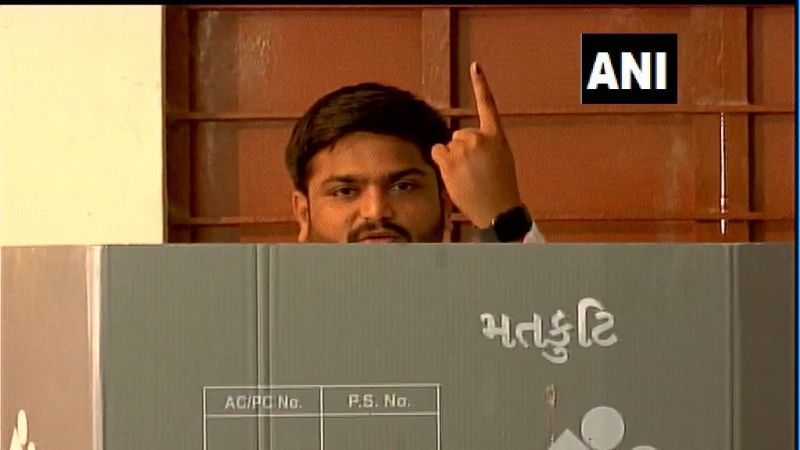 11:20 am: Kerala: Veteran actors Mammootty and Mohanlal cast their votes in Kochi and Thiruvananthapuram respectively. 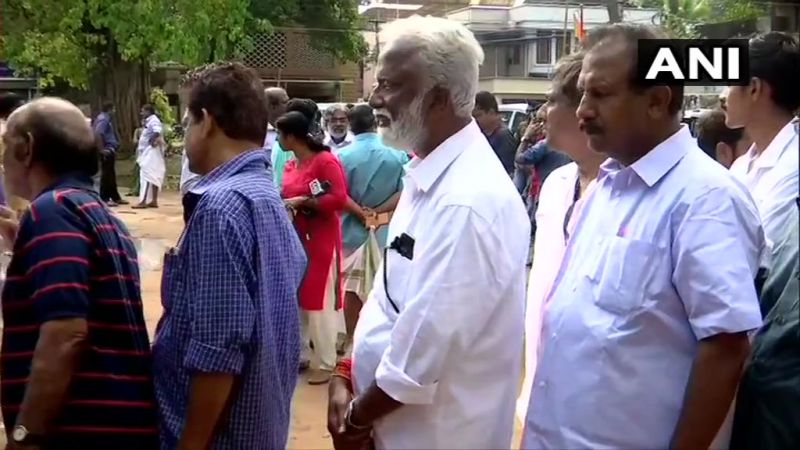 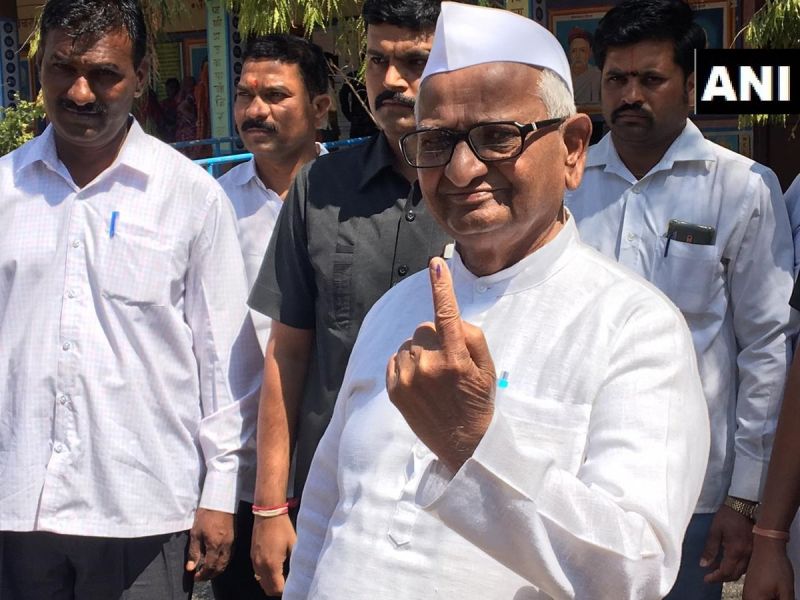 10:55 am: Moradabad: BJP workers beat an Election Official at booth number 231 alleging he was asking voters to press the 'cycle' symbol of Samajwadi party.

Read: BJP UP workers beat up Election Officer in Moradabad 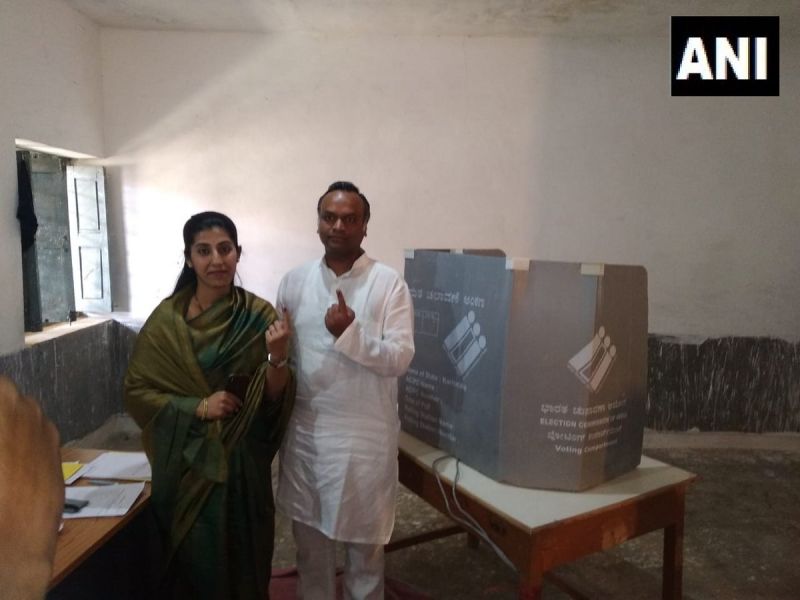 10:23 am: West Bengal: Three TMC workers injured after a crude bomb was hurled at them. The incident took place in Domkal municipality in Murshidabad. 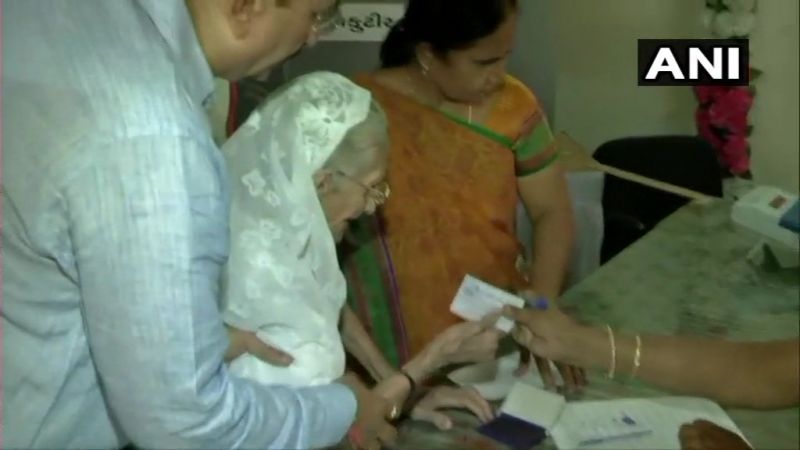 10:15 am: Kerala: Senior Congress leader and Thiruvananthapuram candidate Shashi Tharoor casts his vote at a polling booth in the city. He is up against BJP's Kummanam Rajasekaran and LDF’s C Divakaran. 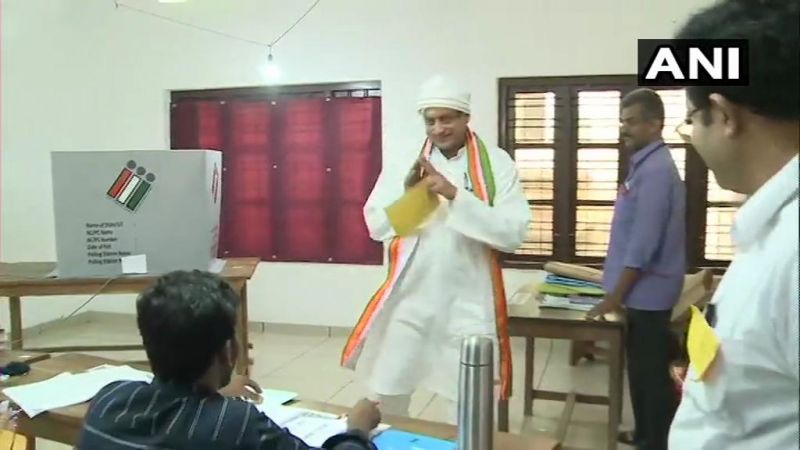 09:50 am: Younger brother of Mulayam Singh Yadav, Abhay Singh Yadav after casting his vote at a polling booth in Saifai, Mainpuri. 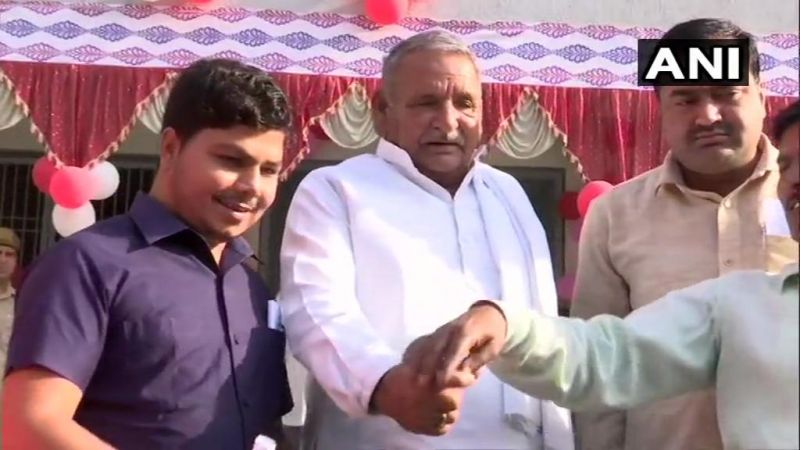 09:45 am: Chief Minister of Odisha Naveen Patnaik casts his vote at a polling booth in Bhubaneswar. 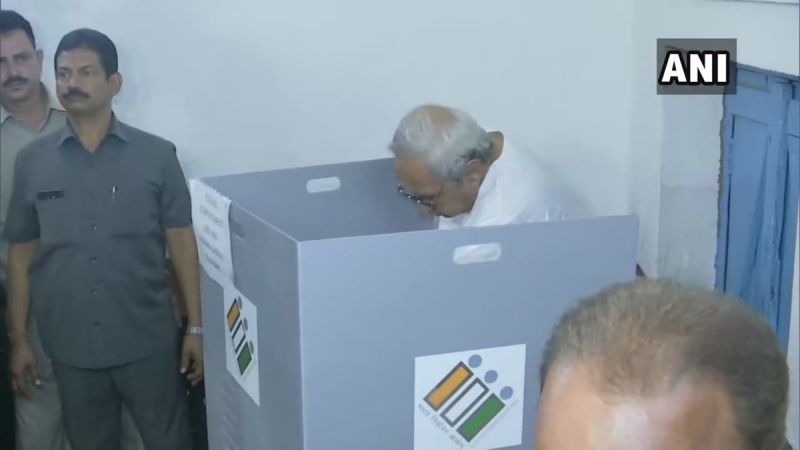 09:28 am: Gujarat: BJP President Amit Shah and his wife Sonal Shah cast their votes in Ahmedabad. 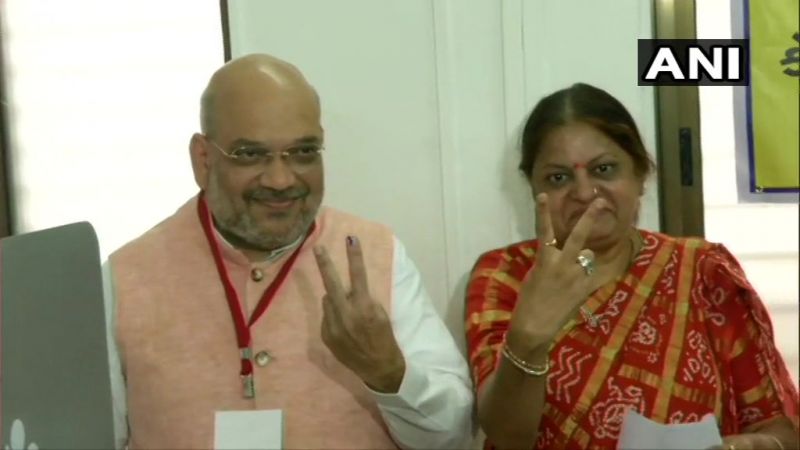 Read: 'Every vote can take nation ahead,' says Amit Shah after casting his vote

09:20 am: Odisha: Union Minister Dharmendra Pradhan casts his vote at a polling booth in Talcher. 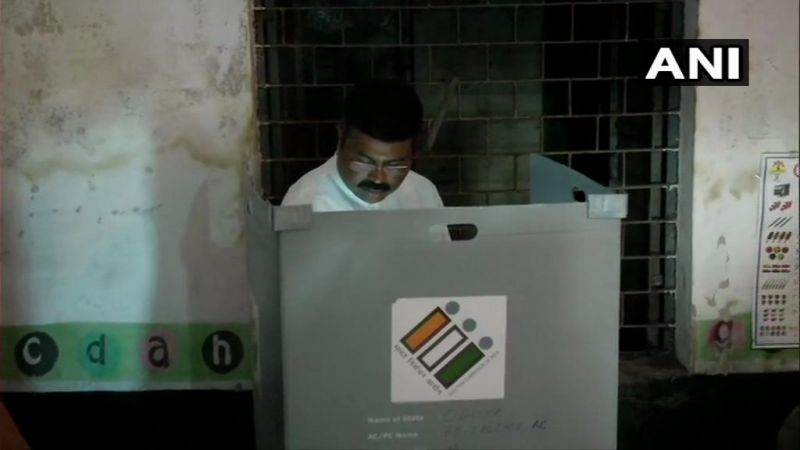 09:10 am: Odisha: A specially-abled person casts his vote.

09:05 am: Gujarat Chief Minister Vijay Rupani and wife Anjali cast their vote at a polling booth in Anil Gyan Mandir school in Rajkot. 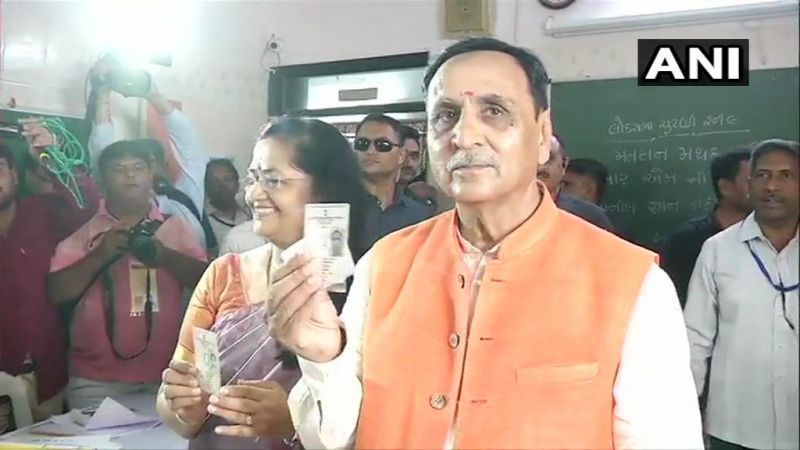 08:43 am: PM Narendra Modi in Ahmedabad: The weapon of terrorism is IED, the strength of democracy is voter ID. I can say with surety that the voter ID is much more powerful than an IED, so we should understand the strength of our voter IDs. 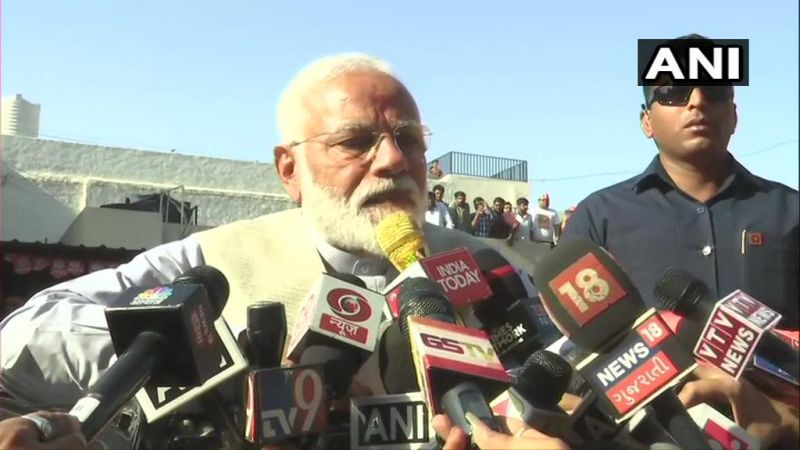 Read: Power of voter ID much more than IED of terrorism: PM after casting vote

08:35 am: After casting his vote, PM Modi said, "Today third phase of polling is underway, I am fortunate that I also got the opportunity to fulfill my duty in my home state of Gujarat. Like you feel pure after a holy dip in Kumbh, one feels pure after casting vote in this festival of democracy."

08:27 am: PM Narendra Modi after casting his vote at a polling booth in Ranip, Ahmedabad. 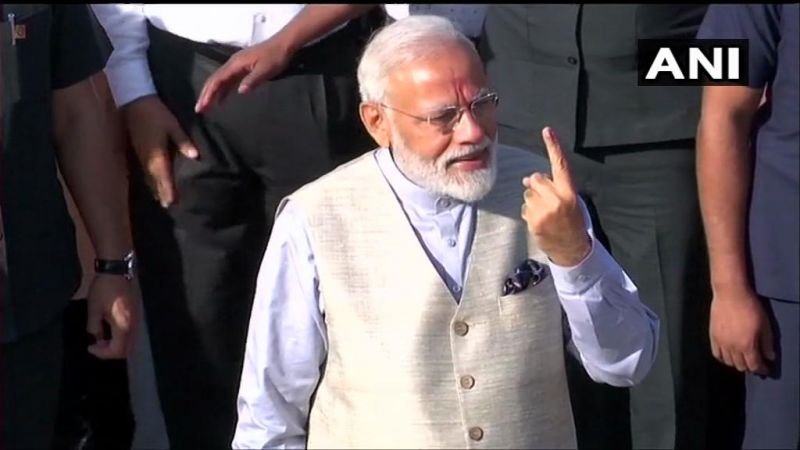 08:25 am: PM Narendra Modi casts his vote at a polling booth in Ranip, Ahmedabad. 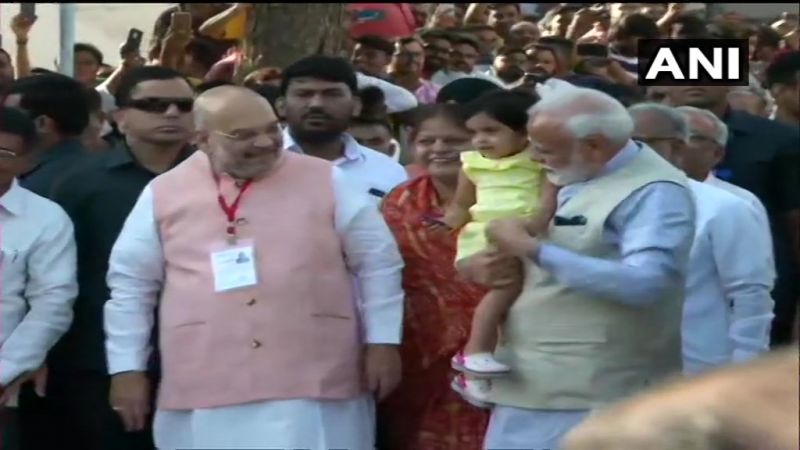 08:15 am: Maharashtra: Nationalist Congress Party's Supriya Sule along with her family casts her vote a polling station in Baramati; She is sitting MP and NCP MP candidate from Baramati. 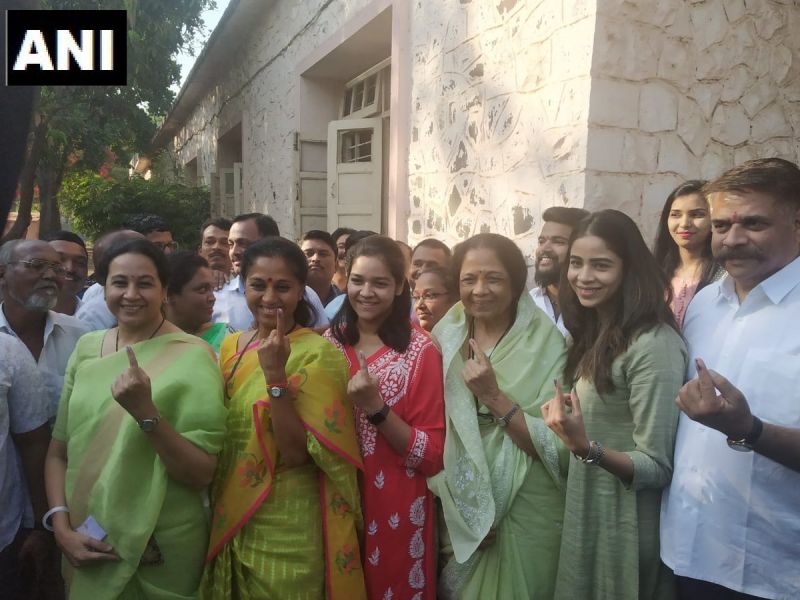 07:52 am: Gujarat: Prime Minister Narendra Modi met his mother at her residence in Gandhinagar today. He will cast his vote in Ahmedabad, shortly.

07:50 am: Kerala CM P Vijayan queues up to casts his vote at polling booth in Kannur district.

07:35 am: Bihar: Visuals from polling booth number 151 in Supaul parliamentary constituency where voting is yet to begin, currently mock poll is underway at the polling booth after a faulty EVM was replaced. 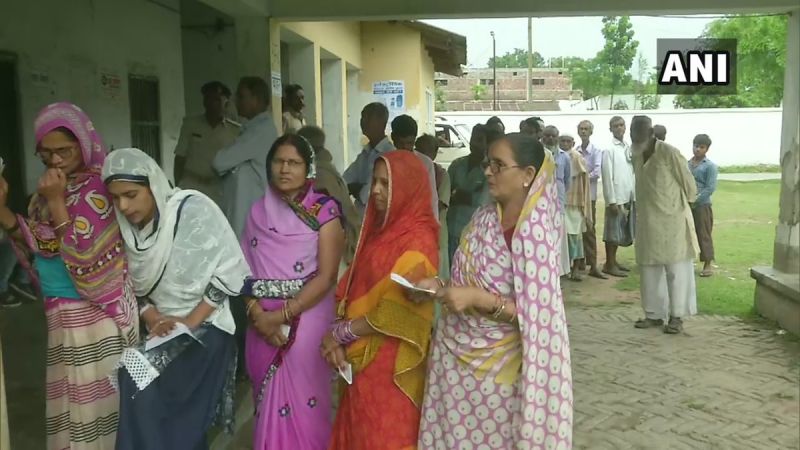 07:30 am: Prime Minister Narendra Modi arrives at his mother's residence in Gandhinagar. He will cast his vote in Ahmedabad, shortly.

07:25 am: Karnataka BJP MP candidate from Shimoga BY Raghvendra casts his vote at a polling booth in Shikaripura.

07:00 am: Voting begins for third phase of 2019 Lok Sabha elections in 116 constituencies across 13 States and 2 Union Territories

In the first phase (April 11), Bihar saw the lowest voter turnout with 50 per cent while West Bengal received the highest turnout with 81 per cent.

In the second phase of polls, 68 per cent voter turnout was recorded.

The counting of votes will take place on May 23.