MAUD minister K.T. Rama Rao has declared that they would take up the roads closure issue with the Defence ministry immediately.

HYDERABAD: MAUD minister K.T. Rama Rao has declared that they would take up the roads closure issue with the Defence ministry immediately. He further instructed the Principal Secretary Arvind Kumar to follow up on the issue affecting lakhs of residents in Cantonment and adjoining areas.

KTR was responding to a tweet posted by Mr Pankaj Sethi, one of the lakhs of citizens affected by the roads closure in Secunderabad Cantonment. Mr Sethi had tweeted the DC report (KTR: Army testing residents patience) published on Thursday. KTR promptly responded to Mr Sethi's post and assured him of the government’s intervention.

It may be mentioned here that Mr Rama Rao, while speaking in the Legislative Council on the roads closure in Cantonment, felt that the Army was testing the patience of lakhs of citizens by closing roads unilaterally. 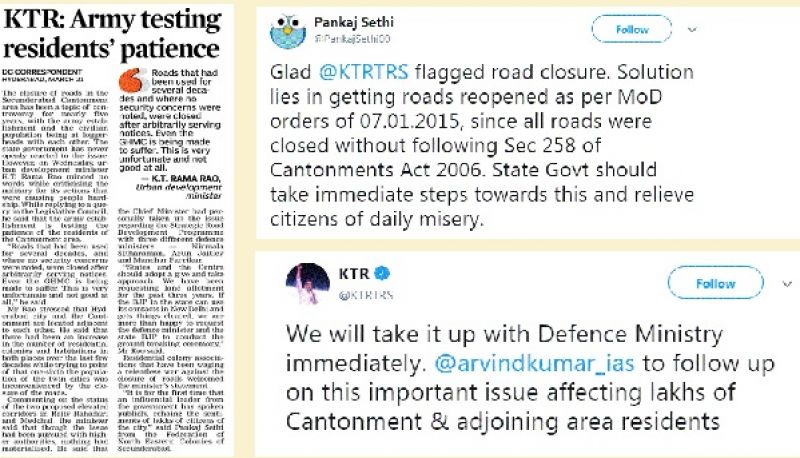 Pankaj Sethi in his tweet lauded KTR for flagging the roads closure. Solution lies in getting roads reopened as per MoD (ministry of defence) orders of January 7, 2015 since all roads were closed without following Section 258 of Cantonments Act 2006, he posted, urging the state government to take immediate steps to relieve the citizens of daily misery. Meanwhile, citizens are upping the ante now that Defence top brass in New Delhi will soon be shifting attention to Secunderabad Cantonment roads issue because the Gough Road extension deadline is set to expire on May 31.

“A signature campaign has been taken up and nearly 70 colony associations have been approached already to collect and give signatures of colony residents highlighting people’s woes because of roads closure. This campaign is being held on Sunday and the aim is to collect 10,000 signatures in the coming weeks. These letters are being sent by post to the Defence minister Nirmala Sitaraman so that she understands the plight of the citizens,” said members of the Federation of North Eastern Colonies of Secunderabad that took up this initiative.
Vijay Dabade, a retired banking official from RK Puram said that several colonies from his area are facing the brunt of the roads closure decision.

“The other day my family including women members were returning home from hospital. We reached few minutes past 10pm. Despite requests to allow the car with senior citizens to pass through the army jawans were stubborn and were in no mood to listen,” he said.

We took West Maredpally route then, but again army jawans posted there also did not allow us to take Gough Road. Ultimately, the vehicle had to go to Trimulgherry petrol bunk chowrastha and head to RK Puram. This is how army is behaving with civilians, including senior citizens", he lamented.

Principal Secretary (MAUD) Arvind Kumar told Deccan Chronicle that a letter addressed to the Defence Secretary, Government of India has been sent on Thursday from the Chief Secretary  based on instructions of minister.

With Gough Road closure deadline set to expire on May 31, the government will be requesting the Centre to postpone closure of the road till an alternative arrangement is done on a permanent basis, the senior IAS officer said.