Hyderabad: The ‘Liquor Syndicate Scam’ is being buried slowly but surely. It’s been eight years since the swindle involving bureaucrats was exposed. The Special Investigating Team (SIT) filed its report in 2012. But prosecution hasn’t followed up this multi-crore fraud.

When the giant liquor scam that cost the exchequer Rs 1,300 crore was unearthed in 2010, the then government appointed a SIT headed by the director general of police (Anti Corruption Bureau) to enquire into the matter. The SIT registered 48 cases against a whopping 1,119 officials and 174 non officials.

The SIT recommended prosecution of the 1,119 officials. However, the ACB was spurned several times by the revenue department, at Secretariat level. Approval to prosecute just 20 persons was given to the ACB; the rest were referred to different agencies, where they languish in convenient obscurity. About 16 cases were diverted to the Commissioner of Inquiries (CoI), 20 to the Tribunal for Disciplinary Proceedings (TDP), and nine to departmental enquiry. 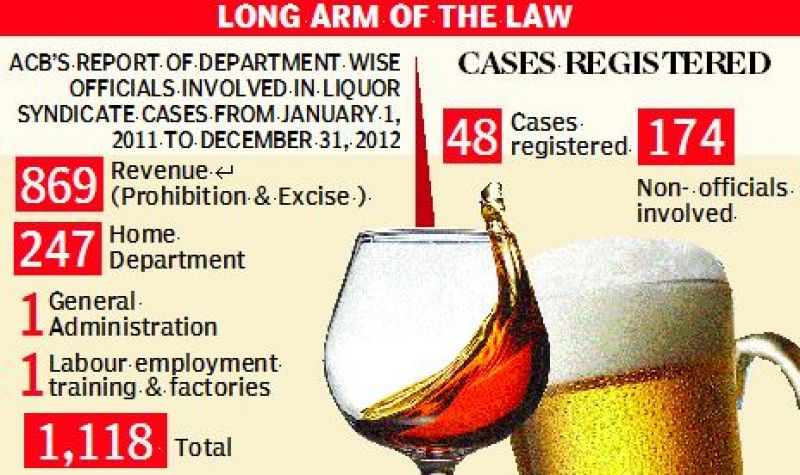 Here is the largely stagnant status of these cases.

The revenue department said 16 cases had been referred to the CoI, but the CoI, in reply to an RTI query, revealed: “Out of 16 only one case reached CoI and is pending, and there is no track of the remaining 15.”

Twenty cases were referred to the Tribunal for Disciplinary Proceedings (TDP). The post of Judicial officer (third member) in the TDP has been vacant since 2014 except for two months in 2016 and there is no supporting staff. Hundreds of cases are put in pending files. Of the 20 cases referred, enquiry has been initiated in just two cases.

The nine cases referred for departmental enquiry seem to be largely an eye wash as this statement from the revenue department of the TS indicates: “The enquiry process is going on in nine cases which are pending at different stages and after receipt of the reports, further action will be taken.”