Picture used for representational purpose only.

The city’s lakes are not only under attack from sewage but also rampant sand mining.  which is threatening their ecology and the topography of the land around them. Although  the lakes in Sarjapura, V-Valley and Sarakki, have been devastated by the sand mafia, it is the people who are in the forefront of the battle against it, while the authorities remain largely apathetic. Aksheev Thakur reports.

If sewage is proving to be the deathknell of several lakes in the city, illegal sand mining is doing its share to destroy them on its outskirts. Take the Doddakere lake in Sarjapura, whose very landscape has changed due to rampant illegal sand mining. The vegetable farm around the lake has turned grey, providing testimony to the ecological knock the area has taken.

The sand mining mafia is said to be active in V-Valley and at a lake near Sarakki signal too. But while the people of Sarjapura are fighting to save their lake, the locals in Sarakki are not prepared to get involved as they fear they could be putting their lives at risk in the process.

Their fears are not unfounded as seeing the people up in arms, the sand mafia reportedly installed a CCTV camera on the wall of a private property in Sarjapur to zero in on activists protesting against it. The locals, however, made sure it was removed last month.

“The camera was removed after our protest last month. But a senior citizen was attacked and even a young boy, who was present during our protest march in October, was assaulted by goons,”  laments Ms Deepanjali, a member of Voice of Sarjapura,a voluntary group made up of concerned locals, fighting to save Doddakere. 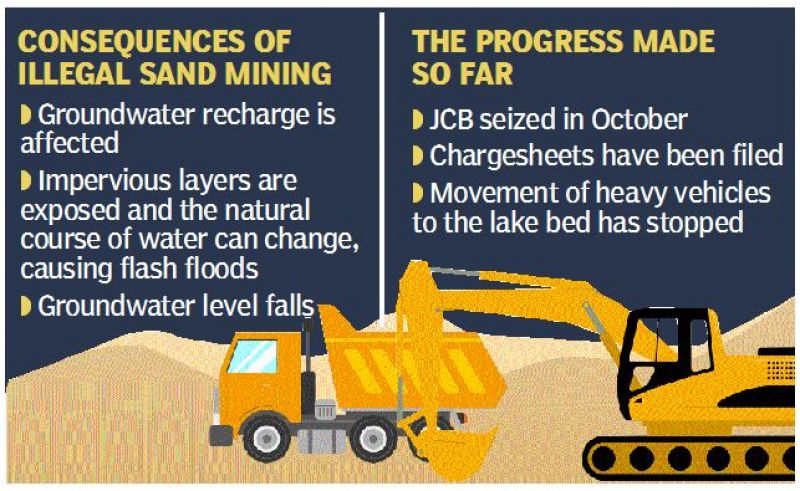 A JCB involved in the sand mining, was seized last month too ,but  the authorities remain largely apathetic, complain the locals. “We have made numerous complaints to those in charge, the response has not been encouraging. Although the movement of trucks carrying sand from the lake bed has stopped and the police say they have filed a chargesheet against those responsible, we don’t know if they are in jail,” says Ms Deepanjali.
The forest department has deputed a forest guard at the lake, but he is reportedly likely to be around only for a fortnight, leaving the locals clueless about what to expect next.

With none of the authorities involved willing to take responsibility and seeming only interested in  passing the buck, very little can be done, she observes sadly. “The forest department washes its hands of the matter saying the land does not belong to it and the minor irrigation department, the custodian of the lake, claims its not responsible for its  maintenance,” Ms Deepanjali regrets.

While the problem remains complex, Mr Sriramalu, an ex-panchayat member says the authorities must put an end to the encroachment of the lake if it is to succeed in reviving it.  “The first and major step towards rejuvenating the lake would be to put an end to its encroachment,” he stresses, while observing that the illegal sand mining  appears to have stopped for now and the tahsildar too has surveyed the lake for its conservation.

Sarjapura Lake dug-up to 50 feet: Agri scientist
Once a biodiversity hotspot, the Sarjapura lake lies forlorn today with the land around it denuded by illegal sand mining and the farmlands nearby grey and lifeless.

Agriculture scientist, Dr Jagadishwar , says sand mining  has affected the cropping pattern in Sarjapura, which was once known for its quality crops such as toor dal, gram and ragi. 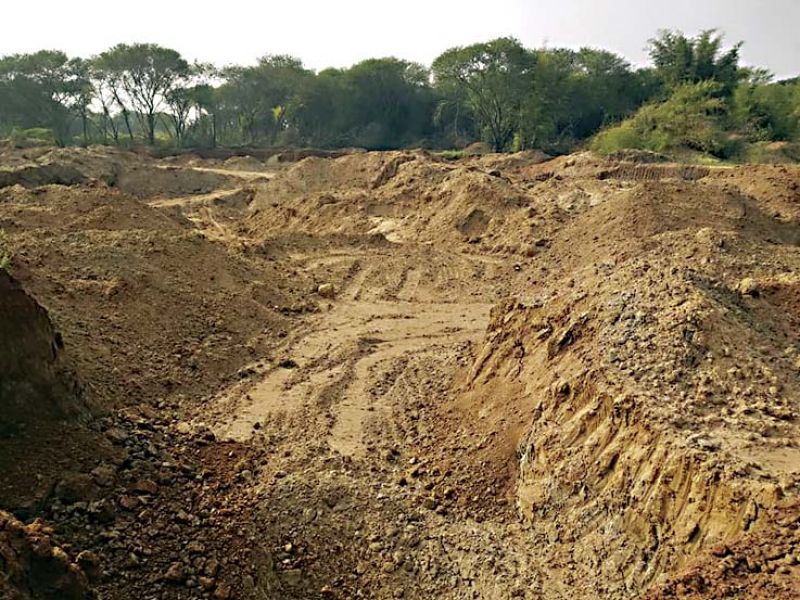 “Due to rampant mining of over a decade the lake has been dug up to 75 feet and at some places, 100 feet. The storm water drain has been destroyed completely,” he rues.

According to the scientist,  the lake once catered to around 40 surrounding villages, but today due to the sand filteration, its water recharging capacity has been  lost.

“Most of the tanks in the city  filled up during the monsoon, but not the one at Sarjapura. Its groundwater has reduced and the farmers are suffering. Many of them have quit farming for construction jobs and others are feeling suicidal as all they know is farming,” adds Dr Jagadishwar, strongly adovcating  revival of the lake.

“If it is rejuvenated it may once again turn into a  great centre for flora and fauna and most importantly, ease the plight of farmers who are heavily dependent on water here,” he reasons.

To make matters worse, there is over- exploitation of ground water on the outskirts of the city. In Ragihalli, which is starved for water, an illegal water bottling unit is taking what little it has. Lead scientist of the Indian Institute of Science, Dr TV Ramachandra, says nothing could be more more disastrous than having a water bottling unit in water-starved Ragihalli.

“The area is short of water due to rampant sand filtering and if  its groundwater is exploited in this manner, the people will have a hard time quenching their thirst. The unit should be shut down,” he firmly suggests.

■Guest column: ‘State has lost focus on conservation of lakes’

Using term 'Indian variant' for B.1.617 strain has no basis: Health ministry

No bail for Navlakha, house arrest is an option: Supreme Court