A flooded street after heavy rains in Hyderabad on Thursday. (Photo: PTI)

Hyderabad: Telangana Chief Minister K Chandrasekhar Rao on Thursday instructed the Greater Hyderabad Municipal Corporation to take the help of Army and NDRF for the relief measures if needed, as rains are lashing the city for the last two days.

Rao, who is in Delhi, spoke to GHMC commissioner B Janardhan Reddy on phone and asked to be "extra cautious" in view of the forecast of heavy rains in the next four days over Telangana, an official release quoted him as saying.

If necessary, help of the Army, NDRF, police and other agencies can be taken, the CM said. 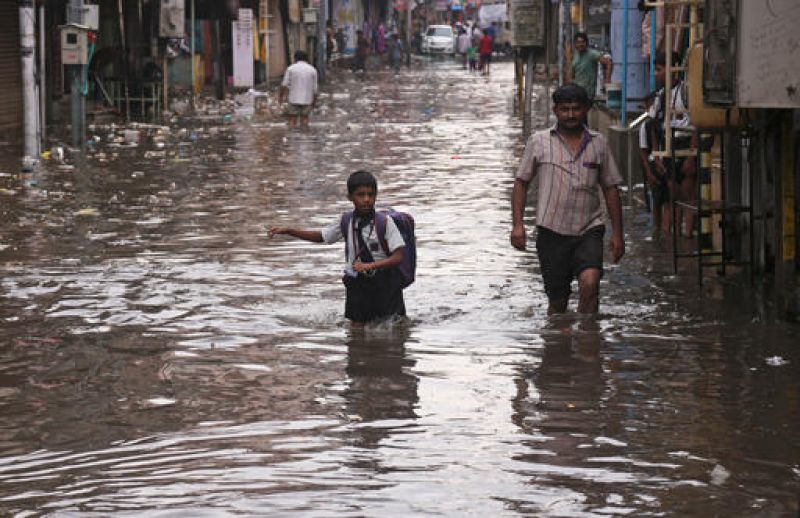 An schoolboy wades through a waterlogged street as it rains in Hyderabad. (Photo: PTI)

Normal life in some low-lying areas of the city is disrupted due to the water-logging, and traffic has been hit badly due to the downpour.

Met department has said "heavy to very" rains are likely in isolated places during the next four days in the state. Municipal Administration Minister KT Rama Rao and some senior officials visited Allamthota Baavi and Mayur Marg in Begumpet which are inundated due to sudden overflowing of Begumpet nala. Rao also inspected relief camps set up by the Government.

A GHMC official said there was a rainfall of 20 mm in eight areas in just one hour between 1 pm and 2 pm on Thursday.

Water entered into some buildings in Nizampet and Bachupalli on the outskirts of the city.

1.08 lakh 'D' voters will not be allowed to vote in Assam polls: CEO