Vijayawada: Telugu Desam national general secretary Nara Lokesh, like most celebrities and politicians, often gets trolled badly on social media by his political rivals and their supporters. But he must be fuming over the turn of things Wednesday, when, in a cruel twist fate, brimming with irony, he came under severe attack from his own partymen and political sympathisers. 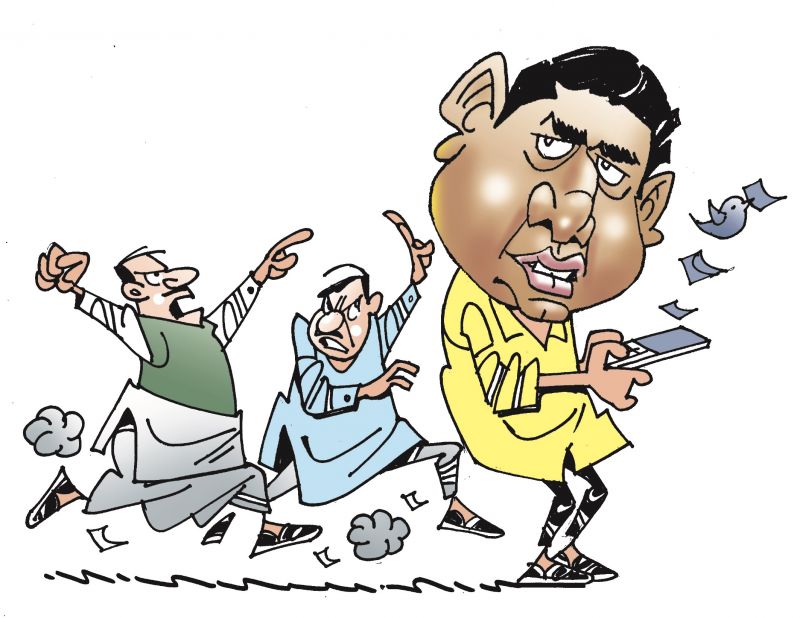 The Telugu Desam men were fuming at Lokesh on Facebook, Twitter and other social media platforms for his endorsement of the upcoming multilingual film ‘Saaho’, starring Bahubali fame Prabhas. Such was the fury of the Telugu Desam against their own young scion of a leader that they abused him by the dreaded sobriquet - ‘pappu’, till now a reference alluded to only his rivals, disparaging his alleged lack of knowledge on public issues.

The saga began when a section of Telugu Desam workers and members belonging to a particular dominant community in the cineaste State gave a call on social media to boycott Saaho. They were unhappy over Prabhas, its lead star actor, praising chief minister Y S Jaganmohan Reddy. Though Prabhas gave a clear rider that he did not know much about politics, in answer to a question on whether Jagan Reddy could be called the ‘Andhra Bahubali’,” and said “people believe that the state would progress under Jagan’s leadership.”

The TD men, in particular those of a dominant community, were even more miffed over comments made by former BJP union minister Krishnam Raju, who is an uncle of Prabhas, that Telugu Desam was on the verge of closure. In an interview, Krishnam Raju called TD president N Chandrababu Naidu a “dead snake”.

A section of vernacular media which reported these developments recalled how the TD cadre had also sought the boycott of a film of  another Tollywood hero, N T Rama Rao Jr, who they accused of joining hands with rival parties.

Lokesh took to twitter and rubbished media reports of TD cadre working against the film Saaho.

Describing the allegations as “blatant lies”, he said such reports were “a conspiracy to divide people on caste lines”. He followed it with another tweet saying, Saaho is a big budget extravaganza and he too, like all Prabhas fans, had been looking forward to watch the film. Finally, he gave a call to TD cadre to watch the movie and make it a blockbuster to call the bluff of those spreading the canards.

Unexpectedly, all hell broke loose with the tweet. An irate TD fan club continued to vow to boycott the film. They questioned Lokesh, asking him he could ignore the anti-TDP comments of Prabhas and Krishna Raju, and going overboard in giving a call to party cadre to make Saaho a huge success.

“Lokesh and Balakrishna are unfit to be in politics. This is hard reality. The more they keep away from the party, better,” said one B. Ramakrishna.

“Are we so shameless as to forget what Prabhas and Krishnam Raju said about us,” said G Dinakar. “We have proved our strength in the past to the cine industry and heroes who speaking in support of our rivals have to pay a heavy price,” he added.

Another post on social media with the account name of Veeru N, said, “It is true that Lokesh can never succeed in politics. He never endorsed movies of his own father-in-law (Nandamuri Balakrishna) or brother-in-law (Jr NTR). It is disheartening to see this pappu waiting for the release of a Prabhas movie.”

Another TDP supporter, V Srinivasa Rao, changed his status to “feeling sad” and accused Lokesh of reacting unnecessarily, apparently under the influence of “a coterie of thieves around you.” Lokesh was worried about people who constitute not even one per cent of the society and hurt sentiments of TD workers and sympathisers, he said.

Some of the TD cadre trolling Lokesh also found fault with him for not giving a similar call to support movies at the time of release of a biopic of TD founder, late N T Rama Rao, set in two parts, a role donned by Mr Balakrishna.