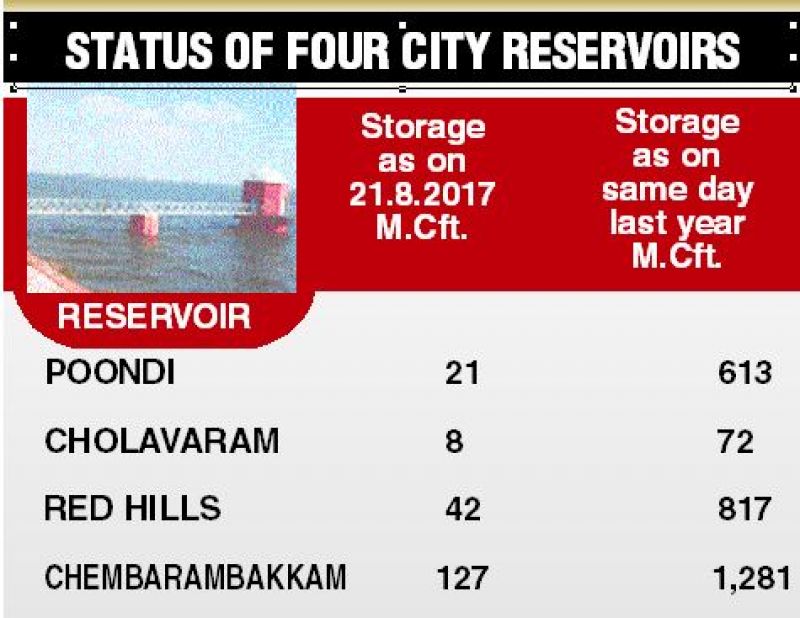 Water storage which stooped to less than one per cent two months ago is now inching towards three per cent, a senior metro water official said adding that intermittent rains have now brought life back to the water bodies.

Though the reservoirs are still dry, neighbouring lakes and ponds have received good inflow in Kancheepuram and Tiruvallur district.

Metro water borewells in these districts are now showing signs of improvement and if the rain continues for another two weeks, the drinking water situation will certainly improve in Chennai, sources said.

On Monday, morning about 215 cusecs of water was received in all the three reservoirs catering to Chennai. Red Hills had an inflow of 120 cusecs followed by Chembarambakkam and Sholavaram with 60 and 32 cusecs of inflow.
The water table in Avadi, Ambattur, Velachery, Chengalpet, Manimangalam and Redhills has improved slightly, sources said.

However, encroachments and failure to desilt the Sholavaram lake is said to be hindering the inflow of water and the Poondi reservoirs is yet to get inflow in to its catchment areas.

Rains in Nagala forests are inadequate leading to weak inflow into Poondi. At present around 430 MLD water is supplied to Chennaittes and if the rain continues the water distribution through pipe supply will be increased. However there will be no increase from current supply of water through tankers, a senior Metro Water engineer said.

Lakes and reservoirs in western and southern districts of Tamil Nadu are slowly filling up due to intermittent rains.

According to public works department sources, at least 50 per cent of reservoirs in Tamil Nadu have started receiving inflow and the overall state storage of water will cross 25 per cent mark by the end of this month.

Bhavani Sagar dam that receives its inflow from Sathyamangalam reserve forest has started filling up. On Monday the dam received an inflow 750 cusecs and 150 cusecs of water was released for drinking water purpose. The storage level reached 54 feet and once when the level crosses 70 feet, water will be released for irrigation, PWD sources said.

Mettur dam, the largest dam in the state, has water up to 52 feet and has been receiving an inflow of 5976 cusecs of water. For drinking water about 1200 cusecs of water is released.

With Mettur and Bhavani Sagar filling up, the drinking water shortage for six districts including Salem, Erode, Tiruppur, Namakkal and Coimbatore will be addressed, PWD sources said. Tiruvannamalai and Vellore district had also received good rainfall in the past two weeks.

However, inflow of water in the dams located in Tirunelveli district continue to be in bad shape as there is no steady flow of water in Thamirabharani river. While rains have picked up in Theni, there are no adequate rains along the catchment areas of Vaigai dam in Madurai district, PWD sources added.