This was the same footage that was allegedly leaked and which was widely circulated on July 18, as part of an alleged move to discredit top prison officials.

BENGALURU: Contrary to reports, based on CCTV footage, that raised questions over whether prison authorities had allowed VIP prisoner V. K. Sasikala and her aide Ilavarasi to leave the prison, jail sources told Deccan Chronicle that it is the same footage that was recorded by a security camera, installed at the ‘B’ Gate inside the prison, that showed Sasikala leaving the women's section for the common area between the men and women's prison, and entering the  special interview room to meet visitors.

This was the same footage that was allegedly leaked and which was widely circulated on July 18, as part of an alleged move to discredit top prison officials.

It may be recalled that on July 18, a video clip revealing Sasikala and Ilavarasi grossly violating the prison rules by not wearing convict's uniform and moving around in civilian dress inside the barrack was leaked on social media, which led to the transfer of DG (Prisons) H.N. Sathyanarayana Rao and that of prison Superintendent Krishna Kumar, who allegedly gave Sasikala and her relative, better facilities.

Sasikala was seen wearing a salwar and carrying a handbag, while Ilavarasi follows her, wearing a bright red saree.  The CCTV cameras had been installed to check the activities at the entry gate of the women prisoners barrack, and it captured on camera, Sasikala leaving the women's barrack and walking to "B" gate through Outer Circle road, to the interview room.

The footage released now is nothing but a continuation of the earlier and far more damaging footage that had shown the five rooms that the two convicts were allowed to use. This footage shows Sasikala and Ilavarasi being escorted by a prison woman officer to meet some visitors. 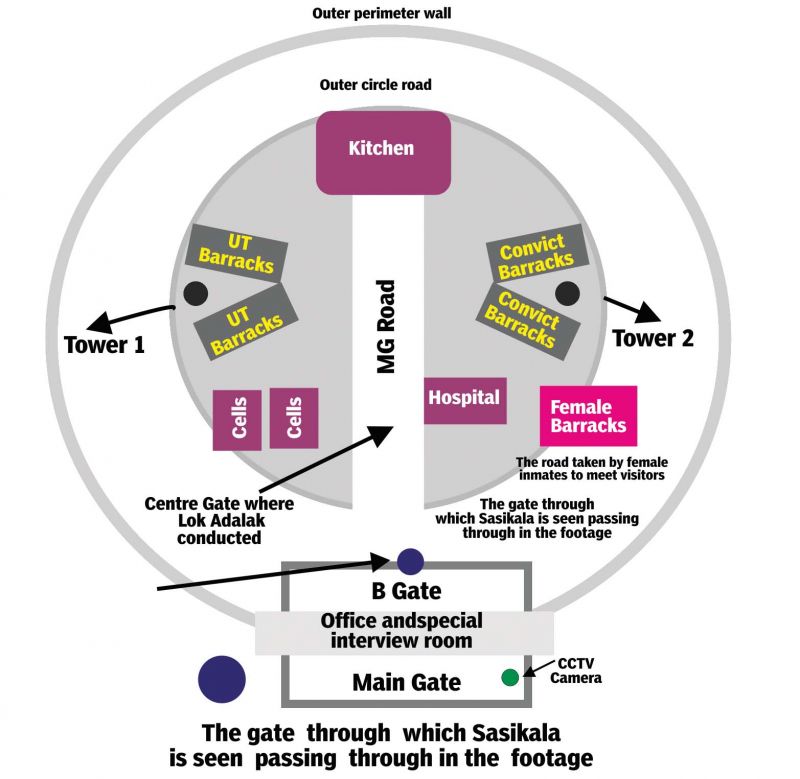 The prison has a main gate through which outsiders enter the prison office area. There is another gate called the 'B' Gate, which actually grants access from within to the barracks, hospital, cells, kitchen and female barracks. Any prisoner who needs to go to the office for a lawyer interview or for a special interview or to meet officials in the office needs to enter the office premises from 'B' Gate. The gate opens out into a road that leads to the kitchen and this road is called the M. G. Road within the premises. The video actually shows the inmates entering the office from the 'B' Gate, that is from the inside of the prison, and not from outside the prison. All offices are guarded by prison guards and staffed by prison inmates.

It is speculated that some persons with vested interests are misusing the clip, misinterpreting it and deliberately distorting facts. The footage submitted by DIG Roopa D. to the Anti-Corruption Bureau is being vetted as part of an ongoing investigation into the scandalous goings on inside Parapanna Agrahara where inmates like Abdul Karim Telgi too were allegedly given special privileges. Retired IAS officer Vinay Kumar, tasked to submit a report in a few weeks, has asked for an additional week's time to hand over his findings.

IPS officers transferred
The state government has cancelled its earlier order posting an IPS officer as Chief Superintendent of Prisons of the Bengaluru Central Jail.

The government, on August 4, had posted Nikham Prakash Amrit, SP of Bidar District, as Chief Superintendent of Prisons of Parappana Agrahara Central Prison.

This was the first time that an IPS officer was given the responsibility of administration of any prison. The move had come after the allegations of irregularities and corruption in the prison department, particularly Parappana Agrahara central prison, had kicked up a storm. On Monday, the government cancelled the order and posted Mr Amrit as Commandant of KSRP 9th Battalion. It is said that IPS officers are not willing to go to prison administration that too limited to a single prison.