BENGALURU: There was chaos and confusion at Mantri Techzone and Coremind project site near Agara Lake when the citizen activists, who were out to inspect the spot as per the directions of National Green Tribunal (NGT), were blocked from entering the project site by security staff and authorities.

However, the citizen activists lead by environmentalist A. N. Yellappa Reddy barged into the project site and were shocked to find construction activity in full swing, amounting to contempt of court.

It may be recalled that during the last NGT hearing, when the state government failed to furnish an Action Taken Report on the Matri Techzone, the NGT had requested the petitioners — NBF, CAF, Praja Raag, BET, Forward Foundation to furnish the ground realities after inspecting the spot. The Mantri Techzone was accused of encroaching upon the wetlands of Bellandur and Agara lake and it was penalised with Rs. 117 crore.

The citizen activists will submit their findings of the site to the NGT during the hearing scheduled on Tuesday.

A recent spell of rains has only aggravated the situation in the low lying areas of Bengaluru where rampant construction in low-lying areas lead to flooding and hardship to residents.

Citizens nail Mantri violations
A citizens’ group inspected Mantri TechZone immediately after a request from the National Green Tribunal (NGT). On reaching the spot, the group found that the wetlands have been encroached and a fence has been built to disconnect the lake and the wetland. Construction activity was on in full swing when the team reached the spot. 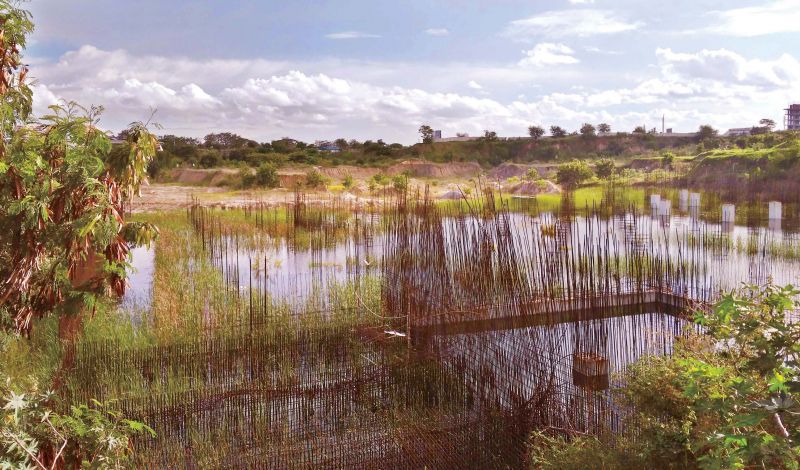 “The entire wetland is gone. It purifies the water without spending a lot on the sewage treatment plants. This is the direct violation of the Supreme Court’s order, which clearly says any construction on the waterbody amounts to gross violation of the Right to Life,” said Mr Yellapa Reddy, an environmentalist and one of the petitioners in the case.

The NGT, on May 4 last year gave clear directions that all structures in the buffer zone should be demolished and if the builder, in this case, Mantri, fails to comply with the order, the government should bring down illegal structures. However, nothing has been done.

Mr Muralidhar Rao of Citizens’ Action Forum told Deccan Chronicle, “According to the 2005 Master Plan, the area was green and used to be a farm land. Look at it now, the debris is all over the wetland.”

Adding further to the worrying impact of environmental degradation, Mr Rao said that because of the narrowing of the rajakaluve, water backs up in the city and it was one of the reasons for the city getting inundated on Tuesday after the heavy downpour.

Mr Nitin Sheshadri, president of the Koramangala 3rd Block Residents’ Welfare Association, highlighted the fact that all the structures on the premises are illegal, including the boundary wall which has come up in the buffer zone. “The builder has built structures below high water land, because of which water has entered in the basement of the structures. Despite an assurance from Mantri Builders, not a single structure has been demolished, either by Mantri or by the government,” Mr Sheshadri said.