Nagunur sits on past glory of 400 temples

The inside view of the temple. (Pics by Ramchander Pentuker)

Hyderabad: Nagunur is a beautiful little village, just off Karimnagar, nestled amidst huge rock cliffs. The heat coming off the rocks in the afternoon is quite terrible, but the village looks picturesque, clean and very active.

A bunch of youth sitting at a shop nearby watch over a new temple being built on the roadside. While grey granite is used to build the temple, it is sealed with the help of lime and mortar. The construction of the temple, which is designed exactly like the Chalukya temple inside the village, is being supervised by Mr Santosh Kumar Dave. Luckily for him, Nagunur is also his native place.

The Nagnoor fort (also spelled Nagunur) was built during the Kakatiya dynasty and later developed by the Musunuri Kamma kings in the village of Nagunur, around 8 km north of Karimnagar. It was one of the most important forts of the Kakatiya empire and contains the ruins of a cluster of Western Chalukya and Kakatiya temples. If you ask the people to show you the fort today, you get confused stares. 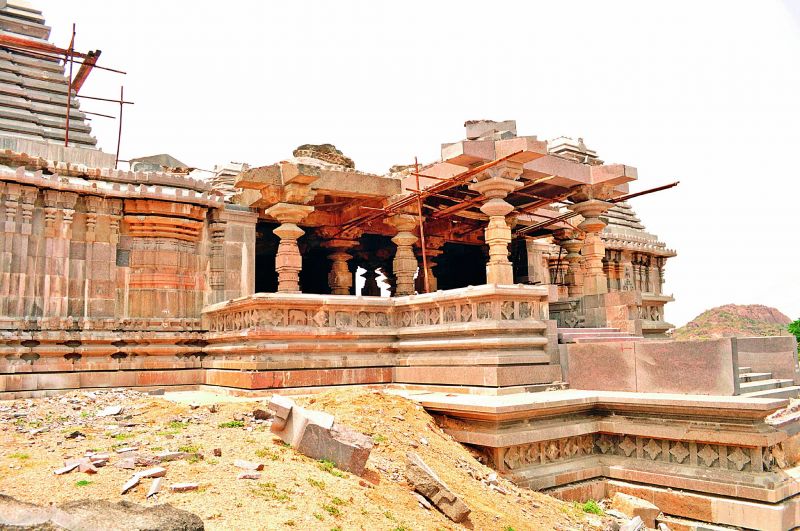 A new temple being built on the side of the road with grey granite.

This place used to be a Rajula Kota but now, it is just another area in Karimnagar. There are several hillocks, huge and black, with a small niche present on top of one of them where a Buddha has been carved within. There is no explanation for this from the villagers.

Incidentally, this small village consists of 400 temples of those times and most have not been unearthed as yet. The one beautiful Shiva temple is in totally disarray, what with the archaeology department having been here and numbered the pillars. There is no formal worship at the temple but Mr D. Konda Rakesh and Mr Tadikonda Shravan, both teachers, come here every four days and do a milk abhishekam before noon. There is a board warning people against entering the temple; if you look at the interiors, it does look like one slip and the entire structure might collapse on itself. But the three Shiva temples within the structure look strong and steady.

The Shiva temple has three shrines. The main entrance is on the northern side and the three shrines face the other three directions. The pillars and galleries around the temple built in the Chalukyan style are worth seeing.

The beams have sculpted images of musicians playing instruments. The one playing the mridangam is somehow attracting a lot of attention. There are stone panels with visuals of dancers in various poses. The frames of the doors are made of stone and sculpted with intricate designs. The sculptures are pieces to be studied for their detailing.

The numbering of the pillars was done 10 years ago but, apparently, the state archaeology department sent an engineer to oversee things two years ago. It is now said that the

department is waiting for 10 acre of land in order to reconstruct the temple. The villagers say that there are many other pieces, including Nandis, which are in safe hands.

Each pillar in this temple is made of a single stone. Though worshipping is not allowed, a priest comes here every day and there is kumkum on all Shiva idols. There are houses on all sides of the temple and the people do not seem upset about the look of the temple.

A modern hand pumpset lies just outside the temple, with a lot of the temple paraphernalia lying around, including statues, beams and pillars. This temple has seen many seasons. Though in a fragile state, it still stands there, leaning and looking beautiful. One of the fallen pillars has the shasanam written on it. If only one could read it. There is also a Shiva Linga lying around and a warrior stands poised above it. There is a dwaja stambha which is 40 ft in height.

The origin and style of this temple suggests that it could have been built when the Kalyani Chalukyas ruled the area. The influence of the Kakatiyas is also visible. There are typical floral designs which are so typical of the Kakatiya art.

Some of the villagers think that all this was built under the patronage of the Kakatiyas. The belief is that there were around 400 temples, and hence, the village was known as Nalugunovalu (400). This was later changed to Nagunur.

The Lord Shiva temple is made of red stone and was recognised as ‘Yerra Gudi’. What is used is pink granite. The shrines are placed on a raised pedestal. While two Lord Shivas look at one another, one more faces the entrance. The intricacy of the carvings on the pillars is worth spending time over.

The main entrance of the temple faces north and lies within the precincts of the Nagunur fort which, of course, is not seen around. Since the department of archaeology has been here and numbered the pillars and stone, one presumes it may be rebuilt or at least kept in a safe place. No one knows what will happen in the future. There is no attempt to even unearth the other temples, which they say remain buried underground. There are big and small rock inscriptions in this dilapidated temple, probably telling us a story about the past glory of this temple and the king and his kingdom. Apparently, this village was the capital for five centuries, between 8th and 13th centuries during the reign of Vemulawada Chalukyas, Kalyani Chalukyas and Kakatiyas and was a centre for religious, political and spiritual activities.

There is a mandapam facing the temple on the opposite side but is now covered by trees and branches growing wilfully. The villagers say that the Kakatiyas ruled over 1,000 villages and this was one among them, but an important place all the same.  A few small monuments which speak of the past are not being looked after and have become homes for pigs.

Celebrations in govt schools till Aug. 22