Bengaluru: With the monsoon playing truant and the Meteorological Department going back on its forecast of excess rainfall, the State government has decided to go ahead with cloud-seeding from August 1.

Rural Development and Panchayat Raj Minister H.K. Patil told reporters here on Friday that cloud-seeding would be done for 60 days. Three radar stations would be set up in Bengaluru, Shorapur (Kalaburagi) and Gadag for the purpose.

“In the wake of reports of deficit monsoon across the state, we are going ahead with cloud-seeding. While Hoysala Projects will implement the project, experts and technicians will arrived here from the US. Besides 3 radars, 2 aircraft - stationed in Bengaluru and Hubballi - will be used for 300 hours of cloud-seeding. We have deployed field teams to oversee work in these places,” he said. Mr Patil said the implementing agency is yet to get 10 more clearances for flight operation and setting up of doppler radars. “We have informed the Centre about the programme, especially the Home Department, and all clearances will be obtained soon,” Mr Patil said. Asked if it is the right time for cloud-seeding when the state is receiving good rainfall, Mr Patil said, “Wherever it is necessary, we will take up cloud-seeding.” 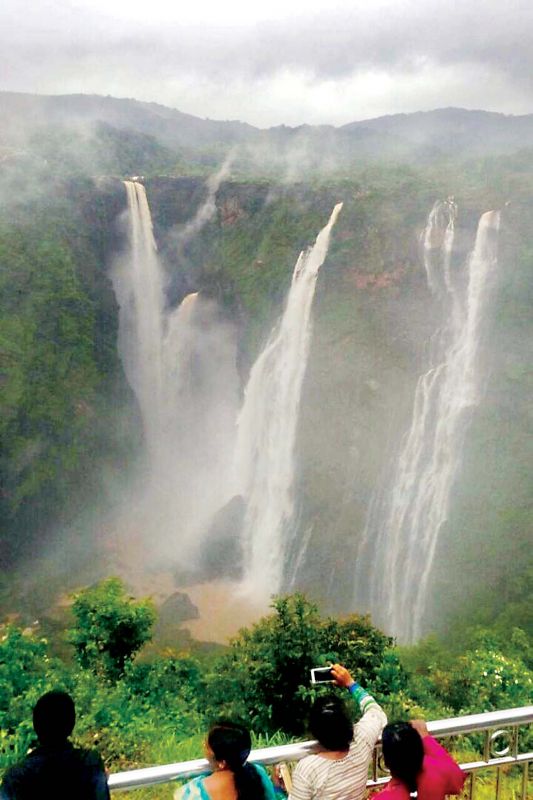 A view of the world famous Jog Falls in Shivamogga district which has been receiving copious rain since Tuesday (Photo: KPN)

“Experts have stated that rainfall will occur in 15-km radius of cloud-seeding depending on the velocity of winds. Usually going by global conditions, cloud-seeding will ensure 10 to 15 per cent of enhanced precipitation in Indian condition,” he said.

Reacting to negative reports on cloud-seeding, Mr Patil said, “It is neither a research nor an experiment. It is only an extension activity of a successful experiment.”

The minister justified the government’s decision and said similar experiments in 2003 were successful.