All the cities have been ranked on the assessment of progress from January 2017 till December 2017 under Swachh Bharat Mission-Urban.

Tell the truth, BBMP! Bengaluru’s abysmal ranking in the Swachh Survekshan 2018 is outdone only by the Palike’s assertion that the survey is probably wrong. Experts also argue that there is more to solid waste management than clean streets and that Bengaluru is the only city with a private collection centre and composting plant. The process, however, is laden with flaws, with few takers for compost, shoddy waste collection and errant pourakarmikas. The system needs transparency and documentation, reports Aksheev Thakur

In yet another thumbs down for Bengaluru’s record in garbage management and overall cleanliness it figures nowhere in the Swachh Survekshan 2018. Although a complete list of ranking is still to be released by the Ministry of Housing and Urban Affairs, the city does not feature in the list of cleanest state capitals, which Greater Mumbai has topped, or anywhere else for that matter. Overall, Maharashtra has been judged the best performing state.

The survey covered all cities of India (4,203), which together accounted for a population of 40 crore. In a saving grace for the state, Mysuru with a population of three to 10 lakh was declared the cleanest city and Hunsur as the best city in Solid Waste Management (SWM) in the South Zone.

But for Bengaluru itself it was a dismal showing despite its claims of  having improved its garbage management and disposal and enforcement of the plastic ban. CEO of the Namma Bengaluru Foundation, Sridhar Pabbisetty feels a lack of  transparency in the way the city’s garbage is managed is to blame.

"Even now, pourakarmikas are on dharnas and citizens don't know why they are not turning up. The Storm Water Drains (SWD) and lakes are in a sorry state and ward committees are not functioning.  There is a need for proper monitoring," he underlines, adding that  decisions related to funds should be made by the BBMP commissioner and Mayor and not anyone else.

Commenting on the parameters adopted by the survey, spokesperson of the Solid Waste Management Round Table (SWMRT),  Sandhya Narayanan notes that while the cities covered have been ranked on the basis of visual cleanliness, Bengaluru has achieved a lot  in terms of infrastructure for segregation.

“Yes, we do not have visual cleanliness, but solid waste management goes beyond this. Greater Mumbai (may look clean) but it does not segregate waste and just dumps it in landfills,” she argues, adding that Bengaluru is the only city to have a private collection centre and a composting plant as well.

“In the last one year the city has been on a transition in terms of the contractor system and a lot of work is going on on the biometric system. So, in terms of policy we have done tremendous work,” she says.

While under the present Swachh Survekshan, the cities have been ranked based on 71 sanitation related parameters for a total 4,000 marks, activists believe Bengaluru has lost out mainly due to its poor governance.

But a senior official of the BBMP says he doesn’t understand why the city has fared so poorly when it has covered most of the parameters specified by the survey. “We are looking for a clarification on this,” he reveals, adding, “We are trying to scale up segregation at source to 75 per cent by the year end. There is huge improvement in terms of segregation. In fact it is the best in the country so far.” 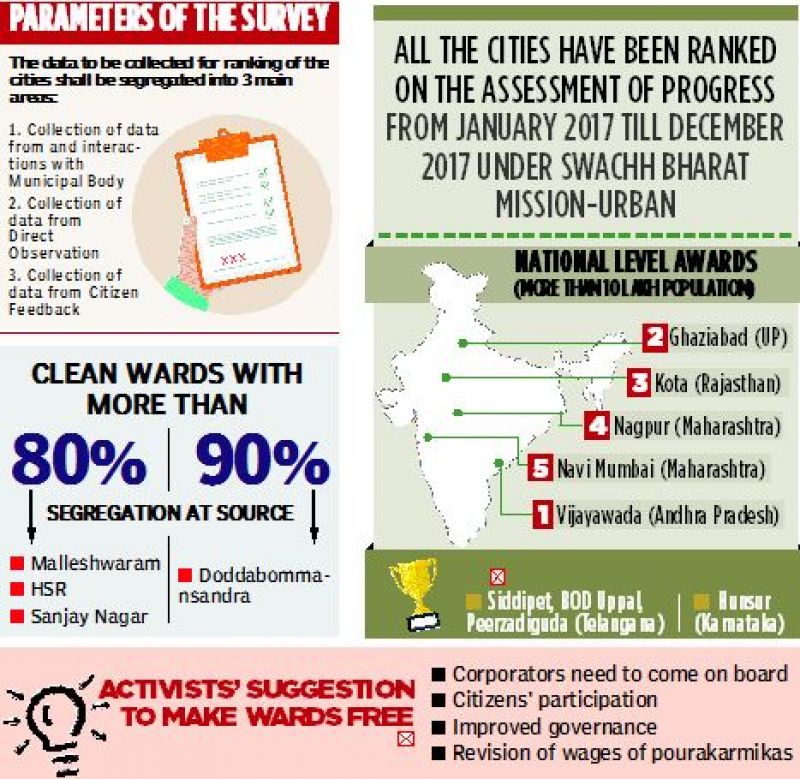 Although the city has fared poorly in the Swachh Survekshan 2018, the BBMP continues to defend its efforts to  improve garbage segregation and collection.   While overall, 45 per cent of the garbage Bengaluru generates is segregated,  the figure is much higher in some areas, say its officers.

They claim that Malleshwaram, HSR Layout and Sanjay Nagar  now segregate 80 per cent of their garbage at source  and Doddabommansandra, which has touched a high of 90 per cent, is regarded as black spot- free.

However, this doesn’t do much for the city when heaps of garbage are found in several areas of Bengaluru South that covers  wards like  Jaraganahalli and Yelachenahalli, which don’t do very well on segregation either.

But explaining the success stories of some wards, Ms Sandhya Narayanan, spokesperson of SWMRT, says citizen’s participation in Doddabommasandra, HSR Layout and Malleshwaram is very high and this has led to better segregation of waste.  “If all the corporators come on board along with the citizens, segregation can be done properly,” she emphasises.

Unfortunately, dry waste collection centres, which kicked off with great enthusiasm,  have suffered with their workers not receiving  wages on time,  note activists. Besides, the shutting down of plants has also affected  waste processing, they point out.

But  there is some hope ahead as the BBMP is all set to open six waste processing plants on the orders of the  Karnataka High Court, which has given it a month to begin operating them again.

Indian talent moving to Canada due to outdated US immigration policies: Experts