Nipah virus is fatal, it is carried to humans by fruit bats

The rapidly spreading virus has caused the death of three nurses who were taking care of patients in Kerala. Their bodies were cremated immediately by the state health department to avoid contact.

Dr Sudhir Kumar, senior consultant of internal medicine, said, “The death of the nurses is not shocking as any viral disease is highly contagious and can be expected in the state any time as well.”

He said measures can be taken up at airports but contracting a cold is common this season and we cannot keep restricting people. It is believed that half-eaten fruits or faecal droppings of bats could be potential carriers of the virus. The cause of the death of the family from Kozhikode who were first affected has been found out to be a well in their courtyard where dead bats were found. The Kerala health department has covered the well.

Pregnant women, children and the elderly are more susceptible to the disease as their immunity is low. Any breathlessness or cough that occurs out of proportion to the one’s daily routine should be reported immediately, doctors said.

The disease was first identified in 1999 and with increased health problems being associated with the virus, doctors state that the strains have since evolved. 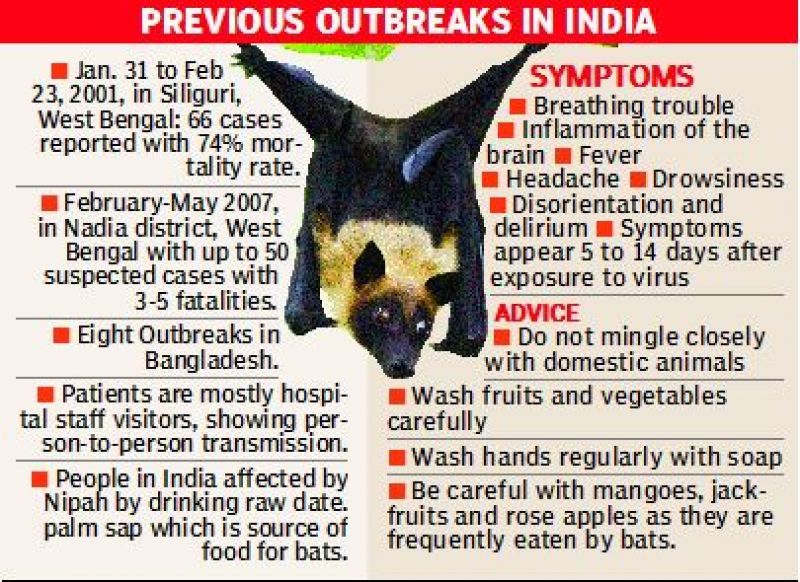 Dr Rakesh Mayur, a neurophysician, said, “The disease causes encephalitis relapse which leads to inflammation or swelling of the brain, which in turn causes death of brain cells. Depending on which part of the brain is affected more, the organs start to suffer.” There is no cure for the disease and supportive treatment is provided to patients which makes oxygen critical for treatment.

“We try to stop convulsions and provide oxygen to different brain centers to ensure that the patient can survive however most patients end up with rigidity in muscles, paralysis learning disabilities or they go into coma.”

No vaccine has been developed for the disease and there has not been much research into it. “The best that can be done now is ensure that patients wear face masks and maintain proper hygiene measures to ensure that the disease does  not spread,” says Dr Sudhir.