DECCAN CHRONICLE. | L VENKAT RAM REDDY
Published May 22, 2017, 12:48 am IST
Updated May 22, 2017, 9:20 am IST
Government is trying to utilise Constitutional provisions which allow states to increase reservations for SCs and STs on their own.

Hyderabad: The state government is examining ways to implement the increased reservations for SCs and STs in education and employment without waiting for the Centre’s consent. 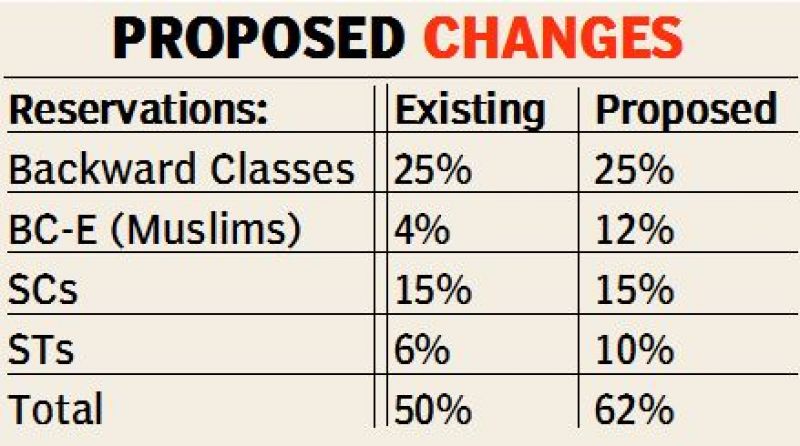 The overall quota is now at 62 per cent, up from 50 per cent previously, following the increase in reservations for STs and Muslims. The state government has sent the Act for the Centre’s assent as the overall quota has crossed the 50 per cent cap set by the Supreme Court.

The government is trying to utilise Constitutional provisions which allow states to increase reservations for SCs and STs on their own, based on the population of the communities.

A team of government officials that had been dispatched to study how the Tamil Nadu government could increase SC and ST quotas without securing the Centre’s nod has reported that it had done so by bringing out government orders.

“The GO copies were submitted to the state government. The TS government is seriously considering bringing similar GOs to increase reservations for SCs and STs as per their population,” said an official in the social welfare department.
According to the 2011 Census, the SC population in the state is 15 per cent. The TS Intensive Household Survey conducted in August 2014 puts the figure at 18 per cent.

The government has to take a call on which on survey of it will follow to hike the reservations.  “There are chances of increasing the reservations for SCs by 1 to 3 per cent from the present 15 per cent,” the official said.

■Telangana hikes quota for Muslims and STs, how much is suspense
■Religion-based quota in Telangana will create another Pak: Venkaiah