A view of St. Sebastian’s Church damaged in blast in Negombo, north of Colombo, Sri Lanka, on Sunday. (Photo: AFP)

Bengaluru: Hours after the first six bombs tore through some of the Sri Lankan capital’s most revered Christian shrines, followed by two more, shattering a decade-long hiatus from a 30-year-long bloody campaign by the separatist Tamil Tigers, the island nation may be facing a fresh and far more virulent threat posed by a radical Muslim group in the form of the National Thowheeth Jama’ath (NTJ).

Six members of the NTJ were reportedly arrested when police homed in on one of their hideouts in the city.

A warning by Indian intelligence that the NTJ, a virulently anti-Buddhist group that was linked to the vandalisation of Buddhist statues would target churches in Colombo as well as the Indian High Commission and possibly, an Indian owned hotel, the Taj Samudra, only minutes away from the Cinnamon Grand and the Shangri-La hotels — both of which were attacked — had been sent to the Sri Lankan authorities on April 7.

A letter, seen by Deccan Chronicle, from the Sri Lankan police chief, Pujuth Jayasundara, dated April 11, to his police officers, in which he sends out a nation-wide alert and clearly states that suicide bombers planned to blow up ‘prominent churches’ and the Indian High commission, remained unheeded. One of the two suicide missions targeted the Cinnamon Grand on Sunday. 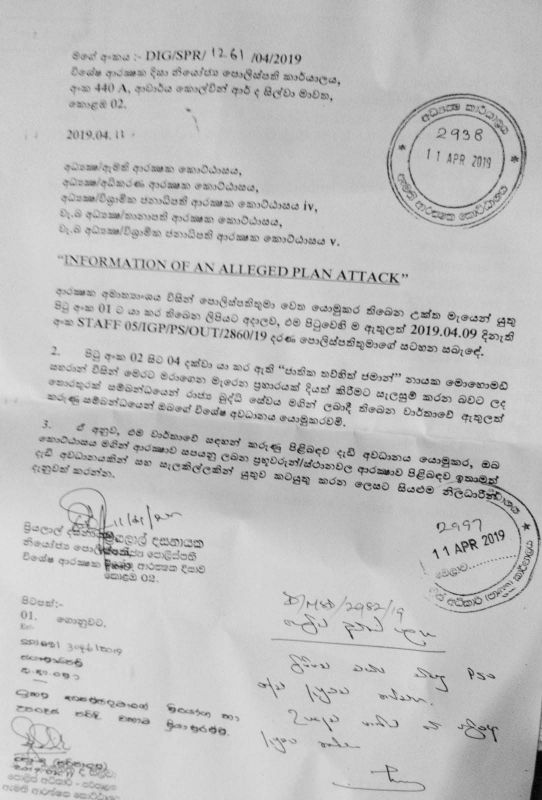 The letter sent on April 11 warning of a terror attack.

The government of President Maithripala Sirisena which is run by his arch-rival Prime Minister Ranil Wickremesinghe admitted that they had been informed of the alert, but only after the Sri Lankan capital faced an attack that is now being compared in scale, to 9/11. Mr Wickremesinghe said he did not know why he wasn’t informed of the threat. High level diplomats in Sri Lankan missions told DC they had no knowledge of the alert.

In January, Sri Lankan police seized a haul of explosives and detonators stashed near a wildlife sanctuary following the arrest of four men from NTJ, the newly-formed radical Muslim group.

The Muslim community in Sri Lanka has been largely peaceful, distancing itself from the Tamil separatists, among whom were a number of Christians.

Tensions between the Buddhist and Muslim community boiled over in 2014, when riots broke in Kalutara, after the Bodhu Bala Sena, a Buddhist group incited a rampage against Muslims, and a blanket ban was imposed on reporting the incidents.

Intelligence sources however said Sunday's Easter Day bombings may have been the NTJ’s payback for the Christchurch massacre. Some reports suggest that IS, which has no presence in Sri Lanka but does operate in the Maldives, saw the Easter Sunday congregations as the perfect target to level scores.