Mathew Samuel, man behind Narada sting on TMC ministers, fears for his life

Kolkata: Mathew Samuel, the man who conducted the Narada sting operation on several Trinamool Congress ministers, MPs and MLAs, has expressed fear for his life and those of his family members.

Samuel, who is now in Kerala for medical treatment, last night posted on Facebook that his children in Delhi called him up and told him that they felt some men were following them on their way to morning walk for the last few days.

"The same thing was said to me by my staff Angel Abraham," he said adding the staffer felt two strangers were watching her all the way to office and back during her travel on metro.” 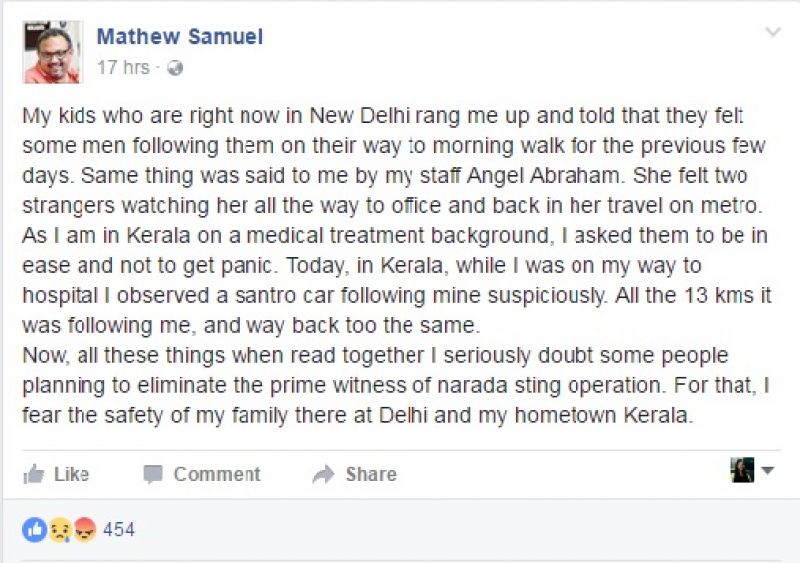 "As I am in Kerala for medical treatment, I asked them to be at ease and not to get panicky", he said in his post.

In Kerala, Samuel said while he was on his way to the hospital yesterday, he noticed a car following him suspiciously throughout his 13 km journey and way back.

"Now when all these things are read together, I seriously doubt some people planning to eliminate the prime witness of the Narada sting operation. For that, I fear the safety of my family there at Delhi and my hometown Kerala", he said.

527 fishing boats back to shores before Cyclone Jawad

MoS defence: We have secure border, can give reply to enemy