It is stil unclear if members of the Pakistani Joint Investigation Team will be given access to the Pathankot Airbase. (Photo: PTI)

Delhi: The Ministry of External Affairs (MEA) on Tuesday said that India has received the visa applications of five members of the Pakistani Joint Investigation Team (JIT) that is probing the Pathankot terror attack.

The Pakistani JIT is expected to arrive in India on March 27 to carry forward its probe into the January 2016 attack on Air force base in Punjab.

MEA Spokesperson Vikas Swarup said the modalities of the visit of the JIT will now be finalised as Pakistan has given the names of the delegation to Indian High Commission in Islamabad.

"We have today received visa applications of five members of Pakistan's joint investigation team. The modalities of the visit will be discussed now as we have the composition of the team," he told reporters.

Last week, Union Minister of State for Home Kiren Rijiju said that India would allow Pakistan's probe team to visit wherever necessary in connection with the investigation, when asked if they would be given access to the strategic airbase.

"We have taken an in-principle decision to facilitate the visit of a Pakistani team to India for furtherance of our case," he had told reporters.

However, Home Minister Rajnath Singh has said that the government was yet to take a final call on the matter and that a final decision would be taken only after the team arrived in the country.

The National Investigation Agency (NIA) on Monday released the photographs of four terrorists killed during the counter offensive, which began on January 2 and lasted more than 80 hours. 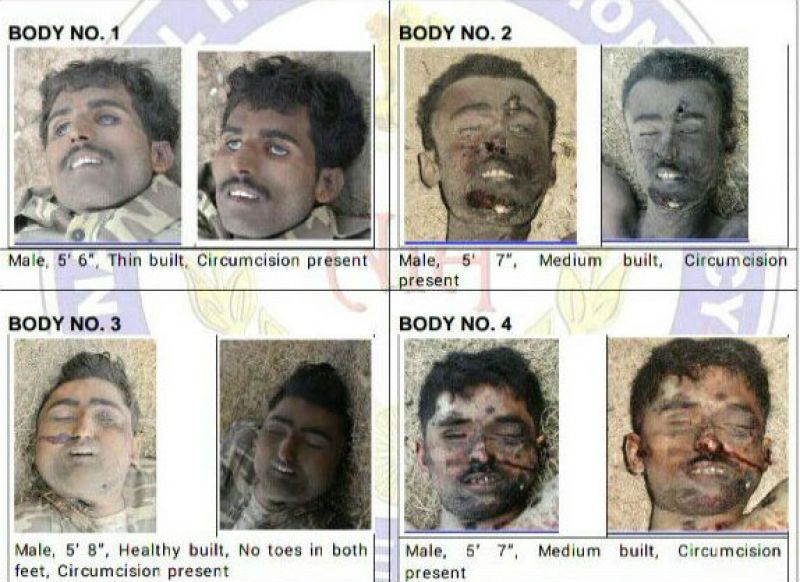 The NIA has sought information regarding the four terrorists. (Photo: Twitter)

The NIA's handout featured the bodies of the four slain terrorists with description of their height. The anti-terror probe agency had said one of the terrorists did not have a toe in both the feet.

The picture has been circulated and public asked to share information about them.

The agency has already approached the Interpol for issuance of Black Notice for the four. The international notice is issued for identification of unidentified bodies found in a country.