Srinagar: The Indian army on Tuesday accorded full military honours to Sepoy Vijay Kumar K, the Army jawan who was killed during an avalanche, in a solemn wreath laying ceremony held in Leh.

The jawan’s frozen lifeless body was pulled from beneath fifteen feet deep snow by rescuers on Sunday days after he with another soldier was swept away by the avalanche in frontier Kargil district of Jammu and Kashmir.

After the ceremony in Leh, his mortal remains were flown to Delhi where Army Chief General Dalbir Singh was scheduled to pay his homage by laying a wreath. Then, his remains would be sent to Vallaramapuram, the victim’s native village in Thirunelvelli district of Tamil Nadu. 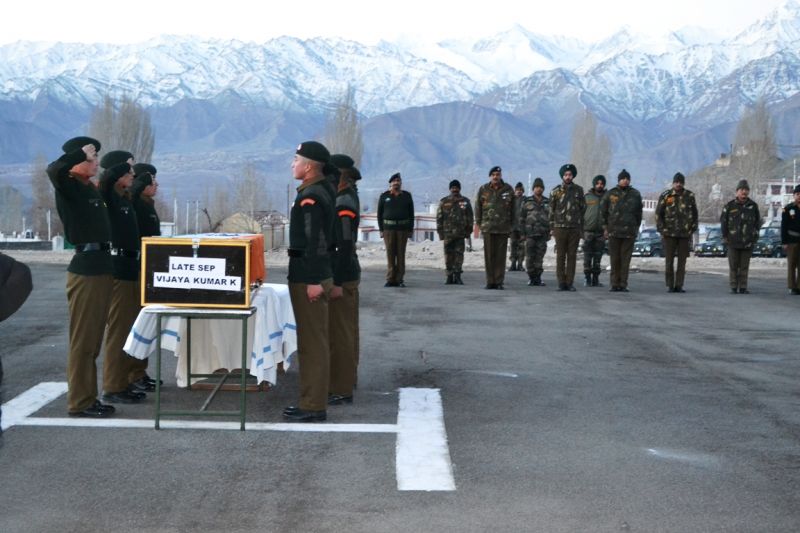 At 10.45 pm on March 17, an avalanche triggered by a mild earthquake hit an Army post in Biamah area at an altitude of 17,500 feet above sea level close to the Line of Control (LoC) in Kargil sector.

Sepoy Kumar was along with another soldier Sujit on surveillance duty in the area. Both were swept away by the avalanche and while Sepoy Sujit was rescued by a team of Army rescuers early next day, Sepoy Kumar went missing.  A three-day search operation during which avalanche rescue dogs, deep penetration radars and metal detectors were also pressed into service by the rescuers led to the discovery of his frozen lifeless body lying beneath 15 feet of snow accumulated in the area of avalanche occurrence on March 20.

Sepoy Sujit who was injured during the incident is, meanwhile, recovering at a military hospital near Leh, Army sources said.

On February 3, nine Army soldiers including a junior commissioned officer were buried alive when a huge wall of frost and snow crashed into the remote Siachen Glacier, smothering a vast area which also had an Army camp located on it in the southern side of the area at a height of 19,600 feet in eastern Ladakh.

A tenth soldier Lance Naik Hanamanthappa Koppad, a resident of Betadur village in Dharwad district of Karnataka, was miraculously pulled out alive from an ‘arctic tent’ buried under 25 feet of frost and snow though in critical condition by the rescuers on February 8, six days after the incident. But he too died in Army's Research and Referral Hospital three days later.