A victim of a cracker blast undergoes treatment at the Sarojini Devi Hospital in Hyderabad. (Photo: DC)

HYDERABAD: Amit, 15, from Karimnagar sat clutching his bleeding eye, crying in pain and urging the driver to drive faster to Sarojini Devi Eye Hospital in the city. He was injured by a rocket bomb.

It took six hours for the vehicle to get to the hospital as people were bursting crackers on the road. “People refuse to give way if it is not an ambulance, but my son was suffering inside the vehicle. The doctors say that his eyesight can be restored,” said Amit’s mother.

Diwali celebrations have left 50 persons partially or fully blinded in the last few days. Doctors at the hospital said all injuries they had treated from Thursday were cracker-related.

Twelve patients had to be admitted for grievous injuries. The youngest was a two-year-old girl who was injured by a ground chakkar.

Seven cranial repair surgeries were done. Hospital superintendent Dr Ravinder Goud said, “We cannot predict the result of the surgeries. We can only hope that every patient’s vision is restored. There have been many cases of corrective surgery and there has been retinal damage in a few cases as well.”

Hospital authorities are expecting more patients from rural areas. “They come the day after Diwali so cracker related injuries continue for two days after the celebrations,” said Dr Goud.

Ms Sapna, 18, a student from Guru Nanak Engineering College, Ibrahim-patnam, was grievously injured in one eye from a rocket bomb during Diwali celebrations held at college hostel.

District medical health officer Dr Padmaja K. said, “She was grievously injured when brought in last night. Her eye has been operated upon but her vision has been damaged. We cannot say how much of it can be recovered till two or three days have passed but the doctors have done all that they can.”

Lucky there were no serious injuries: Doctorss treating kids
Most of the victims of Diwali ‘festivities’ are children who mostly suffer from burns and eye injuries caused by firecrackers.

The superintendent of Gandhi Hospital, Dr Sharath Kumar, says, “We received around eight cases of burns last night and there were only two adults among them. Thankfully, no child was seriously harmed and there were only minor burns but we cannot ignore the fact that many of them had a lucky escape as they were rescued before it could get worse.” 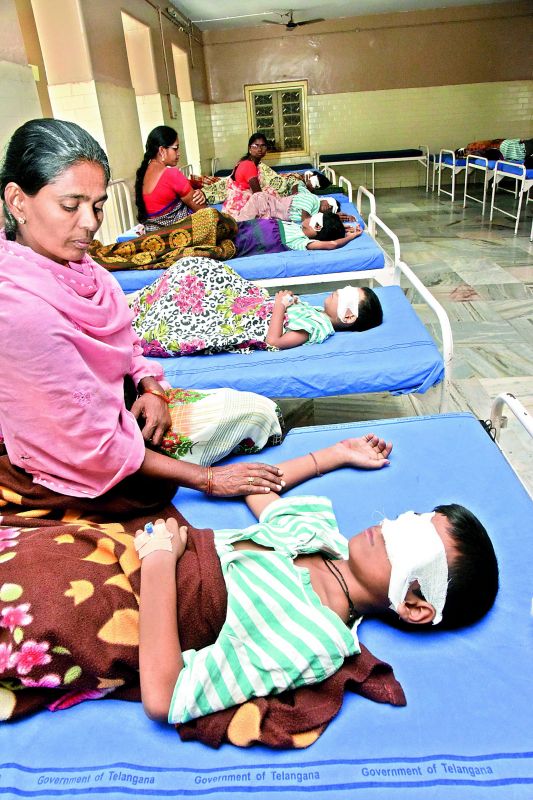 Many patients who came in with burn injuries say that they were not a part of the festivities but just happened to get caught between people who were celebrating. Osmania Hospital superintendent, G.V.S. Murthy, says, “We got 10 young patients with cracker burns. A lot of crackers like atom bombs are lit and then thrown into the air, harming passersby. This act of carelessness leads to so many injuries. They might be unintentional, but they are brutal.”

Parents need to be very vigilant when their children light crackers and must ensure young children are not given anything but sparklers. “Even sparklers can cause harm to children. Most parents just give crackers to children and engage in some other work, which causes injuries. Giving children powerful crackers and not watching over them is dangerous. Children are innately curious and might not move away after lighting a cracker, but will continue to watch it light up,” says Dr Ravinder Goud, superintendent of the Sarojini Devi Eye Hospital, which treated many patients with eye injuries.