Hyderabad: Poor wind speed coupled with smog left the city breathless, quite literally, on Diwali day as pollution levels rose by a whopping 90 per cent, severely impacting the air quality in the city.

Reports from monitoring stations managed by the Telangana Pollution Control Board suggest that Gachibowli contributed heavily to the pollution load.

Pollution from PM (particulate matter)-2.5 reached an unhealthy average  of 112 micrograms per metre cube in the city, which is a sharp increase from the normal range of 60 micrograms. The pollution last year was relatively less at 91 microgram per metre cube.

PM-10, which is larger fine particles, and therefore comparatively less harmful, was at 158 microgram per metre square, increasing from last year’s 148.

Permissible level is upto 100. The prevailing weather conditions added to the woes, with air speed dipping below normal. 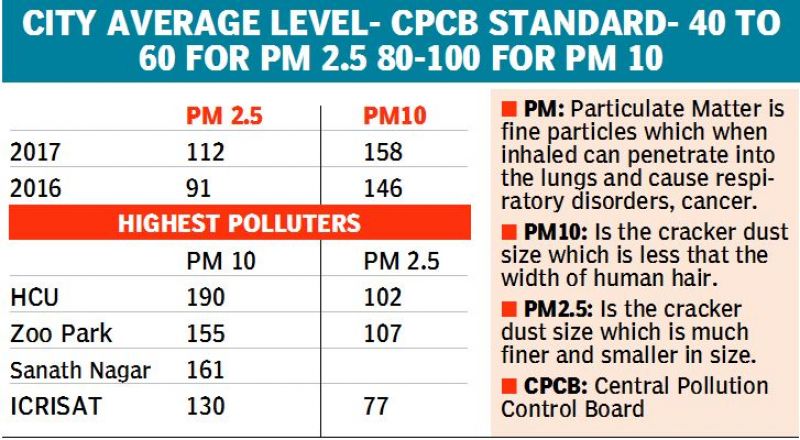 On Diwali day, the wind speed was 0.8 metres/seconds, while the average wind speed in the city is 2.8 metres/second. “The wind is more stable this year so the pollutants will disperse more slowly” said senior scientist, B. Veeranna.

He said that pollution levels should have been lower this year due to the lower sales of firecrackers and the rains, but the weather played the turning point in the pollution, because the air was stiller than ususal.

The Pollution Control Board counselled caution and advised people to stay indoors for the next two days, especially in the mornings to avoid breathlessness and respiratory disorders.

Additional commissioner for health and sanitation of the Greater Hyderabad Municipal Corporation, said that the amount of waste was “manageable”.

“Per day the city generates waste of 4,000-4,500 metric tonnes. The additional festival waste is mostly from commercial zone, mainly decorations, flowers, plastic covers, cardboard boxes etc. Festival waste will be transported and dumped at the permanent dumping yard at Jawaharnagar,” he said.

Pending CBSE class 10 and 12 exams to be held in own schools, not external centres