Villupuram: Anupriya gets her cycle

Anupriya, a Class 3 student, was filling her piggy banks to get herself a cycle. However, when news of Keraliites affected by the flood came, she decided to break her piggy banks to donate her savings to flood affected people. In appreciation of her kindness. (Photo:DC)

Villupuram: Anupriya, who filled five piggy banks to save money for a bicycle but broke them all to raise her donation of Rs 8,240 for Kerala’s flood relief, got a wondrous gift from Hero Cycles here on Monday. The eight-year-old student of class three was presented with a shining blue cycle at the Hero showroom with her proud parents standing next to her for the happy photograph.

“I am so thrilled now, though I did not expect all this (media) attention and this gift of bicycle when I told my father I wanted to break all my piggy banks to take out the money for the Kerala flood victims. I saw the visuals on TV and felt very sad seeing so many children suffering in the water”, the tiny tot said. 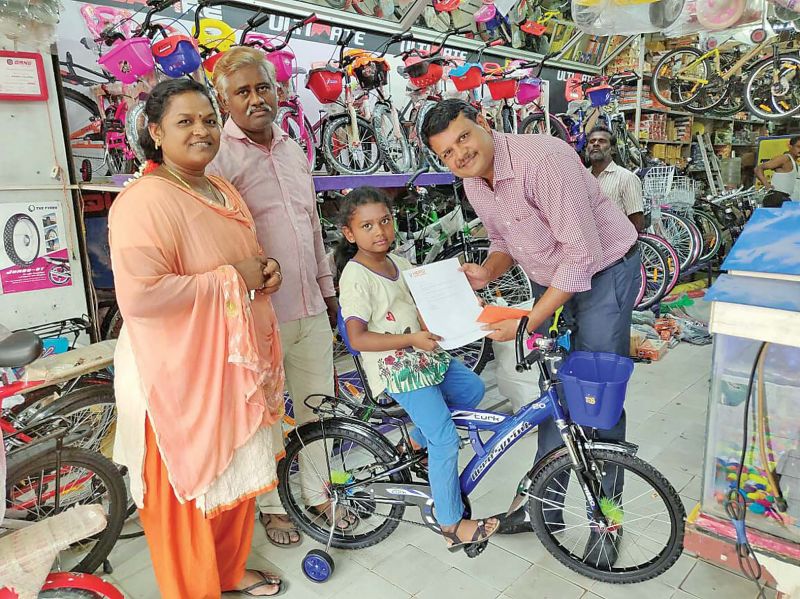 The Hero cycles gifted her a cycle on Monday.

When she was in LKG class, she had asked her father to get her a bicycle but he refused saying she was too young. He did not want to take the risk of sending his little girl out in the traffic. But the determined kid decided to buy a cycle herself and started saving money in a piggy bank. “I kept dropping the money that my parents gave into my piggy bank, at least two rupees that I got from them every day. When one piggy filled up, I got another”, Anupriya said.

Her father Siva Shanmuganathan, who runs a successful coaching centre for competitive exams conducted by the TNPSC here, and mother Lalitha working as an accountant in an auditor’s firm, helped the girl to count the huge amount of coins taken out of the piggy banks and pack them into bags for sending to the Kerala CM’s flood relief fund through their bank.

“We felt happy and proud at the way she reacted to the sad images of the flood victims and how she wanted to help at once”, said Lalitha. “It feels so nice when people now ask me if I am Anupriya’s mother; feel so proud”, she told DC.

The fast-spreading news of the little girl sacrificing her cycle dream to help the Kerala flood victims caught the eyes of the bosses at the Hero Cycles, who quickly responded with the gift of a kid’s bike for her.

“Dear Anupriya, we appreciate your gesture to support humanity in the hour of need. You would get a brand new cycle from us. Please DM your address or contact us at customer@herocycles.com”, tweeted the company.

Hero’s chairman and managing director Pankaj M Munjal went a step further and announced his company “is too pleased to give you one bike every year of your life”.