India is an important centre of origin for both mustard and brinjal.

I have chosen to write on a subject directly to you, that is of paramount importance to the health of millions of Indians. As a responsible scientist, I have a mandate for good global science.

“Makkaki roti aur sarson ka sag”. Why has makka suddenly taken centre stage? Without going into the scientific controversy, or activism, which now surrounds the controversial DMH-II GM (genetically modified) mustard, which the Delhi university scientists pioneered under the direction of Dr Pental, the former vice-chancellor of the University, there are some incontrovertible facts you, respected Prime Minister, must understand when there could be pressures from different quarters on you to give the green signal on its commercial cultivation in India.

India is an important centre of origin for both mustard and brinjal. Mention of mustard in Sanskrit texts dates back to more than 3000 BC. One of the basic tenets in producing transgenic crops (genetically modified or GM crops) is that no gene tampering be done with a crop/plant in a geographic place of its origin, because of subsequent gene transfer through pollen spread, which might result even in creating superweeds, as had happened in the UK with some GM crops.  The best example is of makka or maize.  Mexico in the backyard of the USA falls in the Andean region where maize (or corn as referred to in the USA) originated. Despite all pressures, political or otherwise, from the USA, this tiny nation has said an emphatic “NO” to the development of transgenic maize.

We have the example of the BT brinjal, not very distant in our memory. Notwithstanding all the fraudulent “scientific” data Mahyco, the Indian arm of the agribusiness giant Monsanto, provided, the Independent expert committee, constituted by the Hyderabad-based Centre For Sustainable Agriculture, comprising some eminent members, of which I had the privilege to be the chairman, said an unambiguous “NO” to Bt brinjal, because, like mustard, the Indian sub continent is the place of origin for brinjal.

On a more worrying note, I may add that the current controversial DMH-II mustard, produced at an enormous cost to the taxpayer is an HT or herbicide tolerant variety, more specifically to herbicide BASTA, produced by Bayer, the German Agribusiness giant, which has now bought up Monsanto, and stands as the biggest agribusiness company in the world.

In other words, spraying BASTA will kill all the weeds, except DMH-II. The hidden message to the mustard farmer is clear, plant DMH-II and spray BASTA.

Respected Prime Minister, in India, weeding in the mustard crop is still done by farm women. Think of the enormous loss of livelihood to these poor farm women. A conservative estimate shows that even 25 percent adoption of GM herbicide tolerant mustard in India would lead to the loss of a crore employment days for these poor women. What is the alternative source of livelihood for these poor women? But, the danger of using BASTA for sustainable agriculture does not stop there. It contains an active ingredient called glufosinate, which is a neurotoxin, like a glyphosate which is a carcinogen, banned by World Health Organization (WHO), but used in Monsanto’s “Round Up” herbicide for use in GM soybean produced by Monsanto.

The millions of children born with birth defects in Argentina, where the “Roundup Ready Soybean” of Monsanto has been extensively cultivated is a tragic and shameful record of what transgenic crops have done to unsuspecting human beings, through these multinational companies. Do you want such a mammoth health risk imposed on innocent Indians who do not know what portends the cultivation of DMH-11 mustard?

From what I have learnt there is no data on the performance of DMH-II in all the agro climatic regions of India which has widely varying soils. Mustard is grown in 3-4 different agroecological zones of India and the performance of the DMH-II refer to just one location.

The reason why 19 countries of the European Union (EU) have banned GM crops is that EU countries have, as a matter of principle, budgeted for bias-free education on chemical fertilisers, pesticides and other toxic substances. It is the perpetuation of all-round ignorance, both among producers and consumers, that we see in India which must be halted and reversed to prevent the destruction of Indian environment.

As a responsible scientist, I would like to ask, does India needs transgenic mustard? The answer is clearly in the negative, primarily because, the current DMH-II, being propagated is a lower yielder than any of the hybrid mustard currently under cultivation in India, for instance, the popular variety Kranti, but, with attendant grave environmental hazards. Kranti is a normally produced hybrid, a much better yielder than DMH-II. So, what is the politics behind pushing this hazardous DMH-II? Respected Prime Minister, I humbly request you to ruminate on this critical question which will adversely affect the health of millions of Indians, without any tangible economic benefit to the mustard farmer, but, with attendant problems like displacement of millions of poor farmwomen labour, including lower yield.

In this connection, it might be educative to see what the Supreme Court-appointed technical expert committee had to say about GM crops, in general. It said, “Every GMO must prove in the first instance that it is needed, satisfying all the relevant criteria of yield/trait superiority, before being allowed to proceed to an evaluation of the GMO in a comprehensive and rigorous risk management protocol conducted by independent experts”.

Most unfortunately, in the case of the controversial and dangerous DMH-II, it has now been recommended for commercial cultivation by the Genetic Engineering Appraisal Committee in New Delhi, without foolproof biosafety data. What is the politics behind this?

Under these worrying circumstances in the backdrop, may I humbly suggest setting up an independent, rigorous and competent international committee of experts in GMO risk management and genetic toxicological evaluation of genetically engineered crops which must review the biosafety dossier of the now controversial DMH-II. Concomitantly, a national consensus might be developed, like what the former minister of environment and forests Jairam Ramesh of UPA-II did, to interact with scientists, farmers, stakeholders, including activists, pro and against the GM mustard, to arrive at a consensus as was done by him in the case of Bt brinjal.

The nation will say whether we need a GM mustard or not. If “No” is the answer, please recommend a moratorium for at least ten years, until Indian experts come up with a variety that passes all biosafety tests.

Perhaps, you are now worried about the huge import bill for cooking oil, mustard oil included. But then, may I humbly submit, at this juncture, you should not choose the dangerous path, but, follow a path of caution, and wisdom, with the concern primarily for the health and welfare of the Indians, uppermost in your mind. Please accept, my very distinguished regards, Mr Prime Minister. 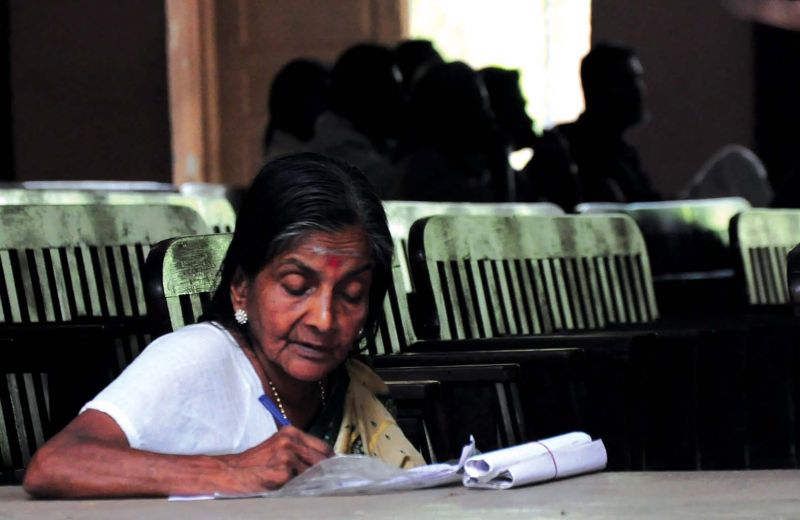 Why apathy to senior citizens?

A facebook post by former Bank of India General Manager DP Bhatejaji has gone viral with its chilling description of the dilemmas facing senior citizens in the country. We are reproducing the same for public interest.

Today I have posted the following on the facebook page of PM Mr. Narendra Modi and sent an email to FM Mr. Arun Jaitley:
Respected Prime Minister Shri Narendra Modi ji,
Respected Finance Minister Shri Arun Jaitely ji,
First of all I extend my sincere thanks in anticipation that you will spare a few minutes of your valuable time to read and take suitable action in the matter. I am a senior citizen and on 01.08.2012, I put Rs 40 lakhs in a nationalized Bank for 5 years. I was being paid an amount of `. Rs 35,352/- every month (of course subject to income tax) enabling me to lead a worry free life financially. Now on maturity I have reinvested the amount in the same Bank and I will be paid `.26,489/-; a shortfall of `8863/- i.e. 25% over the previous return, per month. Can you please advise me from where I should make good the loss or sacrifice consumption of medicines or atta or dals or vegetables or fruit or milk or what?
Practically your government after taking over in 2014 has done nothing for senior citizens. No additional facilities extended but withdrawal of what existed in 2014. No commodity or provision item is available at the price of 2014. Yes you have been able to bring down the figures of inflation and indices but not the actual prices. Every off and on the prices of some essential daily use items go rocket high like dals, chana/besan, salt, onion and now the tomatoes. At that time we cannot even dare see those items.

I know you have political and the theoretical replies for these issues like interest on deposits and advances in banks depend on demand and supply. The prices of daily use items vary with seasons being agricultural products. But the straight upward shoot of prices cannot be justified by these reasons. If the government wants to provide cheaper credits to the trades and industries, it should not be at the cost of depositors. Banks are sitting over volcanoes of NPAs and all good money is being diverted for bad money.

But is it not the duty of the government to enable the senior citizens to lead a respectable life who have spent their golden years in serving various organizations and finally the nation? Government cannot see the other way. I am at a loss to understand from where this deficit of 25 percent be met. Is any of the minister/MP/MLA is ready to cut his salary and allowances by this percentage? If not, then why the public especially the senior citizens?

Perhaps it is because that, like you, we do not have the power to fix our own salaries, allowances and perks and getting everything for full year, for sessions of total of three months and that too attending sessions at their sweet will. When the matter of increasing your salaries comes, you pass the same just in two minutes with no discussion, with all heads together be it from ruling or opposition benches. For this increase, you totally over look the cost to the exchequer, deficit, economics and any other factor.

The government had started a scheme for deposits of senior citizens and the rate was 9.20 percent but In July, 14 it was reduced to 8.3 percent; the amount limited to Rs 15 lakhs. This is totally unjustified. The rate should be a minimum of 12 percent and the amount limit should be equal to what a person gets as terminal benefits. The government should ensure financial respectability to the senior citizens to walk with their heads straight.

I am sure you will understand the plight of the people whose good part of expenses comes from the interest of their savings of life time. Sorry if I have offended you in any way.
Thanks and Regards,
DP Bhatejaji

Delhi govt bans storage, sale, use of firecrackers during Diwali

Mu, C.1.2 variants of SARS-CoV2 not found in India so far: INSAOCG