Parks and recreation? ...Not in Bengaluru!

Our legislators have passed a bill - without any debate - which will reduce the green cover and recreational spaces, like parks and playgrounds, in all new areas from 10 per cent to 5 per cent! As citizens, we have absolutely no say in what happens to our city, where the only sector that seems to thrive is the realty lobby, backed by the politicians - that is slowly but surely concretizing every open space available.

It’s as if there is no connect between the people and the government  they elected to oversee the progress of the city and state. While most are crying themselves hoarse over the loss of green cover in Bengaluru, the Siddaramaiah administration has come up with  a Bill  to reduce space for parks, playgrounds and civic amenities in newly formed layouts in towns and cities around the state. Although not applicable to the city, civic activists fear the Bill could pave the way for a similar onslaught on Bengaluru's remaining lung space in future.

Scathing in her criticism of the government, Ms Revathy Ashok, chief executive officer (CEO) of B.PAC, says reducing lung space and civic amenity space in newly formed layouts of towns and cities is “absolutely bad legislation.”  “The citizens of the state deserve better,” she stressed, warning that the legislation could provide builders the opportunity to turn  tier II cities into concrete jungles  and hold them up as examples for Bengaluru, setting off a slew of projects in the city in future and harming its environment further.

“This is a tool to regularise layouts that have been developed without compliance to existing laws and rules,” the activist alleged, obviously disappointed with the administration’s failure to sense the pulse of the  people and respond more appropriately to their aspirations for the cities and towns they live in. “It is time for the people to unite and strongly register their protest to ensure that the Bill is rejected. The Governor should be persuaded to dump such an eco-unfriendly bill,” Ms Ashok underlined.

All cities have been suffering from unsustainable growth and reducing their lung space and civic amenity sites could be a major blow to their development. Already, air, land and water have been heavily contaminated in cities and if you go on converting them into concrete jungles, it is bound to affect the health of their  people
—Katyayini Chamaraj, Executive trustee, CIVIC

“The air, land and water of our cities, especially Bengaluru, are  polluted.  When Bengaluru is  now being spoken of as  a dying city, the very basis of our sustenance is being destroyed even more by this Bill. To further reduce open green spaces and playgrounds is the height of irresponsibility!” exclaimed  Ms Katyayini Chamaraj,  executive trustee of an NGO, CIVIC. 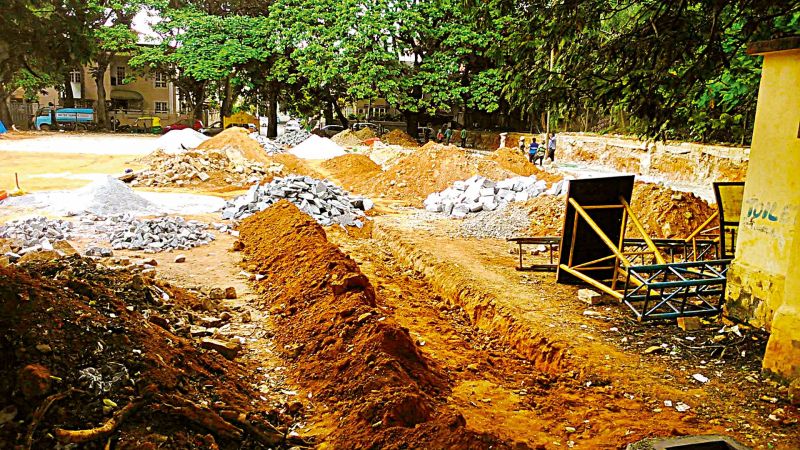 The ground opposite Bethany High School in Koramangala (Photo: DC)

“We need civic amenity sites to provide much needed social infrastructure, which is currently at an all time low. Moreover, any proposed policy or law should have been publicised under Section 4(1) (c) and its rationale and justification given under Section 4(1) (d) of the Right to Information Act,” she pointed out. Recalling that the Department of Personnel and Training (DoPT) had insisted on the government holding public consultations and calling for objections  before formulating any policy or law, she regretted that  none of this had been done in the case of the present Bill. “It has been introduced in violation of the RTI Act and public policy guidelines,” she charged.

It’s a welcome move. As there is no scope for increasing urban space any more , we need to be practical. The land is not owned by government but bought by realtors at a premium. In the age of inflation and when spending on Corporate Social Responsibility (CSR) activities is bleeding the realty sector , projects are  a costly affair
—Suresh Hari, Secretary, CREDAI Bengaluru

Bill a boon for realty sector
If the Karnataka Urban Development Authorities (KUDA) (Amendment) Bill 2016 has got people and activists all wound up with its objective of further reducing lung space and civic amenity sites in newly formed layouts, it is having the opposite effect on the realty sector. Excited at the possibility of getting more space for construction, builders are already counting the big bucks this could translate into.

But they also claim people will benefit as well as the cost of land and apartments could fall as an offshoot of the bill. It could be a win-win situation for all provided the government created eco-zones where neccessary to offset the pollution, in their view. “It’s a welcome move. As there is no scope for increasing urban space any more, we need to be practical,” said Mr Suresh Hari, Secretary, Confederation of Real Estate Developers Association (CREDAI), Bengaluru, referring to the Bill.

“The land is not owned by the government but bought by realtors at a premium. In the age of inflation and when spending on Corporate Social Responsibility (CSR) activities is bleeding the realty sector, projects are becoming a costly affair,” he noted,claiming that the Bill benefited both small and big realtors and also the public.

Aware of the greens’ concerns, Mr Farooq Ahmed, chairman and managing director of Silver Line Private Limited, feels that having drawn up the Bill, the government must also simultaneously focus on improving eco zones to conserve green cover on the periphery of the city and on all its land.