The snake being captured by staffers of the anti-poaching squad of RGIA on Saturday.

Hyderabad: A 10-foot python created a scare after it slithered its way into the premises of Rajiv Gandhi International Airport on Saturday.

The anti-poaching squad rescued the snake without any harm. The incident occurred on Friday afternoon, but news spread only after pictures of the rescue went viral on Net. 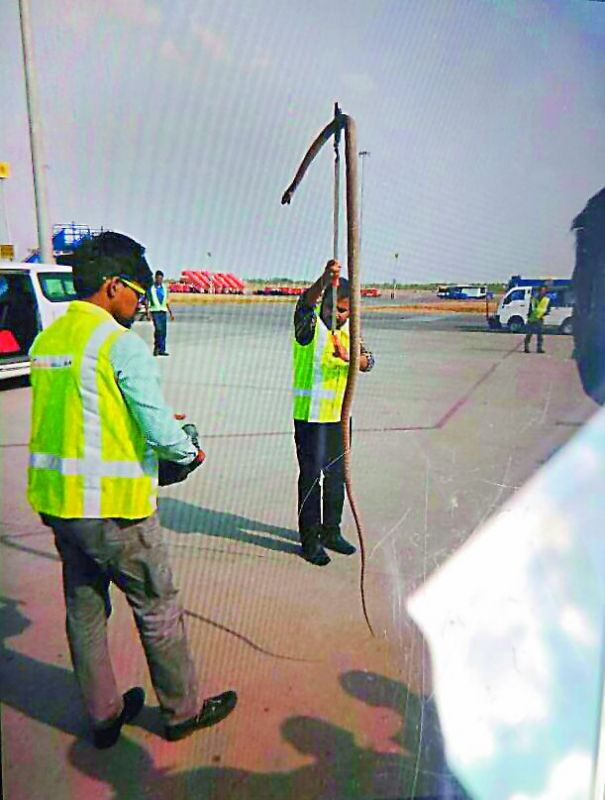 Airport officials said that on Friday around 2.30 pm, engineers of TrueJet airlines were doing routine checks on aircraft parked in Bay 7. The flight was scheduled to take off for Aurangabad in the evening. An engineer suddenly saw the snake a few metres away from the aircraft. He alerted the Airport Operations wing and the airport swiftly went to emergency mode. The anti-poaching squad rescued the snake. Airport sources said that if the snake was not spotted it may have entered the landing gear of the aircraft.

Airport officials said the snake was spotted in the non-passenger movement area. “It was rescued immediately after the maintenance staff noticed it. It did not affect the flight movement in the airport,” they stressed.