Bengaluru: The not so Rapid Action Force!

Women personnel from the Rapid Action Force take out a flag march at Jalahalli junction in Bengaluru on Wednesday (Photo: DC)

Bengaluru: The ill-equipped state and city police came in for intense, all-round flak for its lack of preparedness and shoddy handling of garment factory workers’ protests against changes in the Employee Provident Fund rules on Monday and Tuesday, but the police top brass on Wednesday defended their men saying that the police had to show restraint as nearly 80 per cent of the protesters were women, who were being used as human shield by the rioters and anti-social elements.

The rioters, who had hid themselves among women protesters, resorted to heavy stone-throwing and violence and the police had no option but to fire in the air, lob tear gas shells and cane the protesters, the police officials tried to reason.

“The police deal with patience on sensitive crowds like protesting women, students and labourers as they lose their calm easily. But when miscreants in the garb of protesters use women as their shield to attack policemen we had to disperse everybody. Subsequently, everyone starts rioting when the police start lathicharge,” said a retired senior police officer. 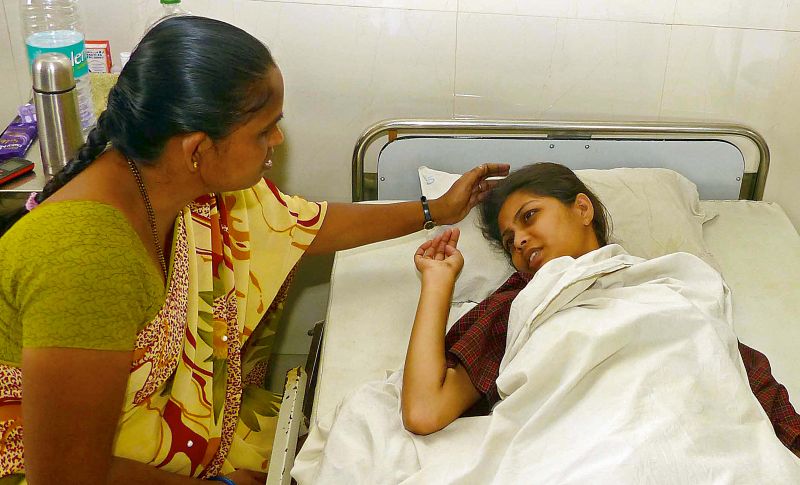 Preethi, a second year PU student who was injured in the police firing, with her mother at Sparsh Hospital in Bengaluru on Wednesday (Photo: R. Samuel)

But critics pointed out that the police failed miserably in gathering intelligence and were equally unprepared in handling the crisis even on Tuesday, the second day of rioting, as over a lakh of people gathered and went on the rampage. Instead of quibbling over city and rural jurisdictions, the police should have had enough force on the ground on day two as a precautionary measure, they said. At the end of the first day’s protest, the police top brass should have called an emergency meeting and taken preventive measures after studying the garment factory workers’ population in the city and the likely protests on the city outskirts, where most of the manufacturing units are situated, the critics said.

“What was the need to fire in the air, when water canons, teargas and caning could have been sufficient to disperse the crowd? What happened to the reserve forces like the KSRP, CAR, Vajra, and RAF and why were they not pressed into service on day two,” the critics asked.

When the number of protestors swelled to over a lakh, the army, which is just a stone’s throw away, could have also been contacted as a reserve force is stationed in cantonment areas like Bengaluru, they said.

Strike causes Rs 100 crore loss
Tuesday’s protest by garment factory workers caused a loss of Rs 100 crore to the city, said FKCCI senior vice-president Tallam Dwarakanath R. It includes losses suffered by businesses, damages to public and private properties etc. Ten buses were burnt and around 180 vehicles were damaged. More than 400 industrial units were shut down by the protest. Garment factories alone suffered a loss of over Rs 60 crore.