The NIA's handout featured the bodies of the four slain terrorists with description of their height. (Photo: PTI)

New Delhi: Ahead of the visit by a Pakistani probe team in connection with the Pathankot terror attack on an Indian Air Force base, the National Investigation Agency (NIA) on Monday released the photographs of four terrorists killed during the counter offensive which began on January 2 and lasted more than 80 hours.

The move comes barely a few days before the Special Investigation Team (SIT) of Pakistan visits here to ascertain the facts of the case and investigation carried out by the NIA.

The NIA's handout featured the bodies of the four slain terrorists with description of their height. The anti-terror probe agency has said one of the terrorists did not have a toe in both the feet. 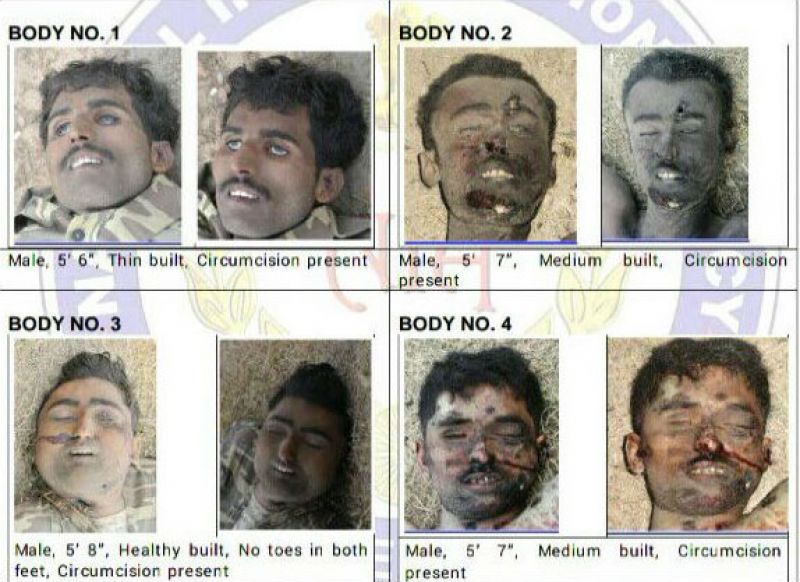 The NIA has sought information regarding the four terrorists. (Photo: Twitter)

The picture has been circulated and public asked to share information about them.

The agency has already approached the Interpol for issuance of Black Notice for the four. The international notice is issued for identification of unidentified bodies found in a country.

About the remaining two, the NIA was planning to approach another forensic laboratory for conducting a fresh test of the samples recovered from the Airmen billet at the Pathankot air base. Forensic laboratory in Chandigarh had said they had found human remains in the samples handed over by the NIA.

It will take some time before the identity of the remaining two was ascertained, an official source said, hinting the same may not be completed before the Pakistani SIT's departure from India.

The SIT will be arriving here on March 27 and would be holding consultations with the NIA about the probe conducted so far, the sources said.

India has already sent a Letters Rogatory to Pakistan seeking certain details about the four.

India has been seeking details of the phone numbers dialled by the four terrorists ahead of the attack on the airbase on the intervening night of January 1 and 2.

The numbers are believed to be in the names of people connected with Jaish-e-Mohammed terror group including Mullah Dadullah and Kashif Jaan. The numbers shared belong to the Pakistani telecom operators like Mobilink, Warid and Telenor.

The NIA has also sought details and picture of sons of Khayam Baber, whose son had was part of the suicide squad that carried out the attack.

Kashif Jaan, one of the key handlers of the attackers, had accompanied the terrorists till the border, the sources said.

The bodies of four terrorists have been preserved. Out of the four, two of them have been identified as Nasir and Salim.

Nasir was the one who had called his mother, Baber, in Bhawalpur using the phone snatched from the jeweller friend of a Superintendent of Police of Punjab Salwinder Singh.

The NIA has also given details, including the batch number of food packets used by the terrorists after infiltrating into India on December 30. The terrorists had carefully buried the packets which had Pakistani markings and manufacturing dates of November and December 2015, sources said.