Man hurls ‘bomb’ at Karnataka CM during an event in Bengaluru

The man threw a 'packet' on to the stage which fell short of the chief minister Siddaramaiah. (Photo: ANI/Twitter)

Bengaluru: In a security scare, a man on Sunday hurled a packet, claiming it was a bomb, at a stage when Karnataka Chief Minister Siddaramaiah, Union Minister Ananth Kumar and former Chief Justice M N Venkatachaliah were present there.

A man seated on the balcony of Ravindra Kalakshetra auditorium here suddenly stood up as Siddaramaih started to speak and shouted, "What have you done to our community? Tell that first."

He then threw the "plastic packet" on to the stage which fell short of the chief minister and lay close to where Kumar and Venkatachaliah were seated, police said.

Security personnel present on stage soon cleared the packet and the man was whisked away from the auditorium by police even as he continued questioning the CM. 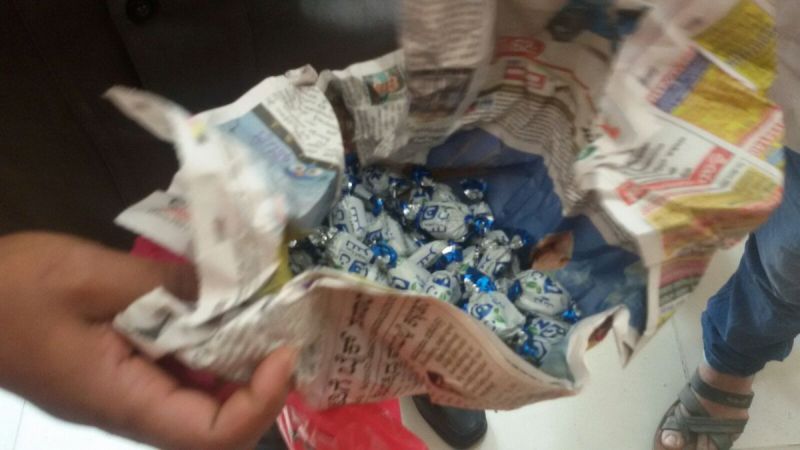 Police said the packet contained chocolate wrappers and the man was being questioned.

"According to preliminary information, the man has been identified as B S Prasad and works with the Forest Division of Bruhat Bengaluru Mahanagara Palike?(BBMP)," said Sandeep Patil, Deputy Commissioner of Police (Central Division) Bengaluru City.

Stating that police are in the process of collecting information about him from BBMP and also his family members, Patil added the man's responses to police questions were peculiar.

"He is saying that he wants to become Member of Rajya Sabha so he had come there. We are gathering information about him and his activities," Patil said.

Speaking to reporters after the function, Siddaramaiah denied that the incident was a security breach, saying "such incidents are common in a democracy."

"I don't know which caste he belongs to, whichever caste is depressed and oppressed we are working for them. Such things are common in a democracy. I have seen such things several times," Siddaramaiah said.

The chief minister said he felt there might be someone who instigated the man as otherwise he did not see the need for him to behave in such a manner.

Asked whether it was a security breach, he said, "who will know when so many people have come here? What can be done if someone comes as a citizen? Such things are common in democracy or else how can it be democracy?"

Krishna in spate; dams downstream to get huge inflows

COVID death data: Kerala to clear backlog, names of deceased to be published