Woman halted at Sabarimala over age rumours, let in after proving she is 52

The tension was defused after the woman, who had come with her family members, convinced the protesters that she was above 50 years, and proceeded to the shrine. (Photo: PTI/File)

Sabarimala: A massive protest by devotees of Lord Ayyappa broke out near the Sabarimala Sannidhanam Saturday following rumours that a woman from Tamil Nadu below 50 years of age climbed the hills to offer prayers to the presiding deity.

The situation turned tense in the area, where section 144 was clamped, as devotees gathered in large numbers at 'Valiya Nadapandhal' to protest against the woman's entry into the temple.

However, the tension was defused after the woman, who had come with her family members, convinced the protesters that she was above 50 years, and proceeded to the shrine. 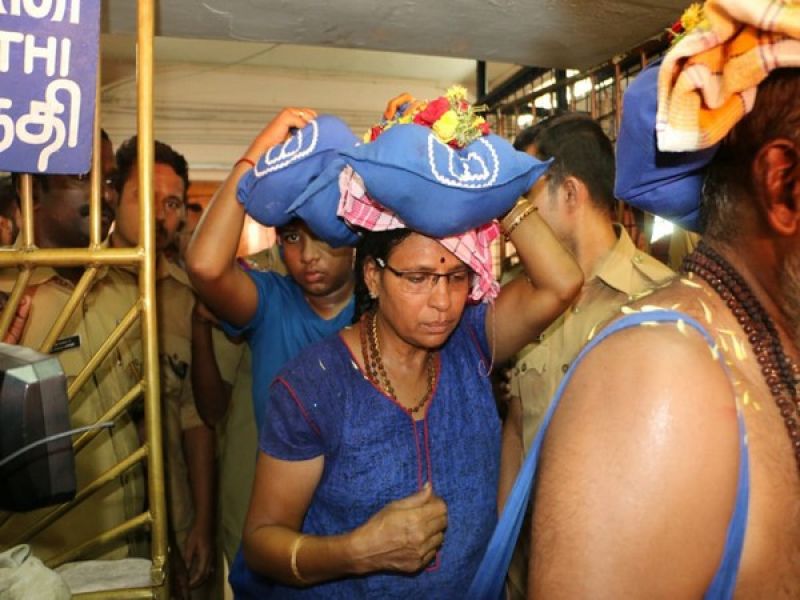 The woman carrying 'irumudikkettu' (holy bundle) climbed the 18 holy steps amid security cover to reach the temple and have 'darshan'.

Meanwhile, Pathanamthitta District Collector P B Nooh said there was no tension at Sannidhanam. "A woman came for darshan. Some news channels followed her...Then a crowd gathered...That was the only issue," he said.

The collector also dismissed as "rumours" reports that some young women were planning to trek the hills to reach the shrine. "There were some rumours (spread) through social media. We verified them...There is no confirmed report (on young women visiting the shrine) so far," Nooh said.

It is the responsibility of the administration to facilitate the darshan of Lord Ayyappa for all devotees, the collector asserted. The Sabarimala temple complex had witnessed high drama and tense moments Friday when two women reached the hilltop with heavy police escort but had to return before reaching the sanctum sanctorum following massive protests by Lord Ayyappa devotees.

Kerala has been witnessing massive protests by Lord Ayyappa devotees opposing the entry of girls and women of menstrual age into the Sabarimala temple since the government decided to implement the apex court order.

The devotees had intensified the agitation at the shrine complex and nearby areas including the base camps, Nillakal and Pamba, since the shrine was opened for the five-day monthly puja on October 17.

On September 28, a five-judge Constitution bench of the Supreme Court, headed by then chief justice Dipak Misra, lifted the centuries-old ban on the entry of women of menstrual age into the shrine.